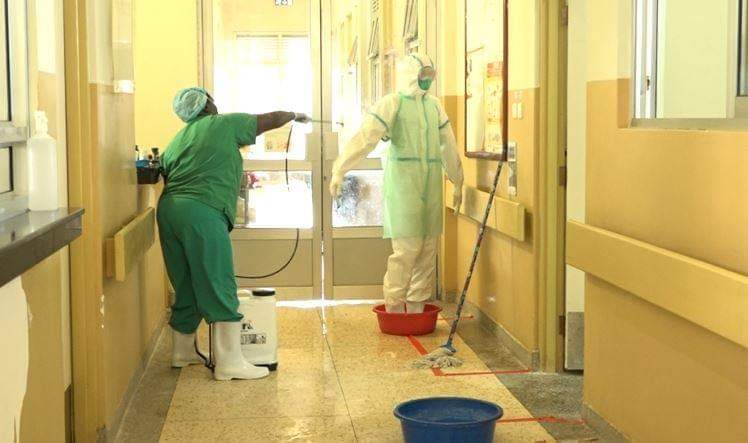 Uganda has confirmed 36 new coronavirus disease (COVID-19) cases, bringing the number of total confirmed cases in the country to 593. The new cases were part of 1,310 samples that were tested on Friday.

All the new cases are Ugandan contacts to people who have already tested positive for the disease. 15 of them are from Kyotera, nine are frontline health workers from Kampala while eight cases were from Yumbe. The rest were picked from the areas of Mayuge, Pader and Buvuma.

The nine cases among health workers brings the number of health workers who have tested positive for the disease to 17.  Last week, the first case of an infected health worker was reported at Mulago Specialised Women and Neonatal hospital.

Doctors under the Uganda Medical Association have in the past attributed the health worker's infections to the poor training of health workers who are placed on COVID-19 treatment wards.

The rise in the number of community cases is a cause of worry according to Health ministry officials. Dr Diana Atwine, the permanent secretary says they are worried the disease can easily spread now.

"Spread of the disease is now going to be easy with the more cases we are getting. Someone can easily get in touch in the community and spread the disease," she said.

The ministry has previously been concentrating on testing truck drivers to stop the spread of the disease in communities where they normally make stops.

However, experts say it was hard to control the movement of drivers because in some cases they provided false information which made tracking them difficult.
CASE IN MAGAMAMA BARRACKS
A positive case of COVID-19 has been recorded in Magamaga military barracks in Mayuge district, eastern Uganda. The victim is a wife to a Uganda People’s Defense Forces (UPDF) soldier, who travelled to the barracks to nurse her ailing husband on Tuesday.
The soldier whose identities have been withheld is reported to have suffered a mental breakdown and was admitted in the barrack’s health facility.

The victim earlier on informed the force’s health team that she has been staying in Bombo military barracks. However, intelligence reports later indicated that although her place of abode is Bombo, the call to nurse her sick husband found her in Singo barracks where she had stayed for close to 15 days.

The UPDF spokesperson in Busoga sub region, George Musinguzi says that the couple was quarantined together and both their samples taken. The soldier has tested negative, while the wife, tested positive for COVID-19

He adds that the district surveillance team received the victim’s results late but she was successfully evacuated from the barracks and transferred to the Jinja hospital Isolation Unit for further management.

Musinguzi further says that the victim’s contacts have been quarantined at the barracks premises but he declined to divulge into details. Meanwhile, Emmy Mitala, the Mayuge deputy resident district commissioner says that two other positive cases were retrieved from Bwonda landing site and Busakila village respectively.

Mitala adds that movements have been restricted along the district’s landing sites with an aim of containing the spread of COVID-19. As of today, 82 people have been discharged after recovering from coronavirus disease.