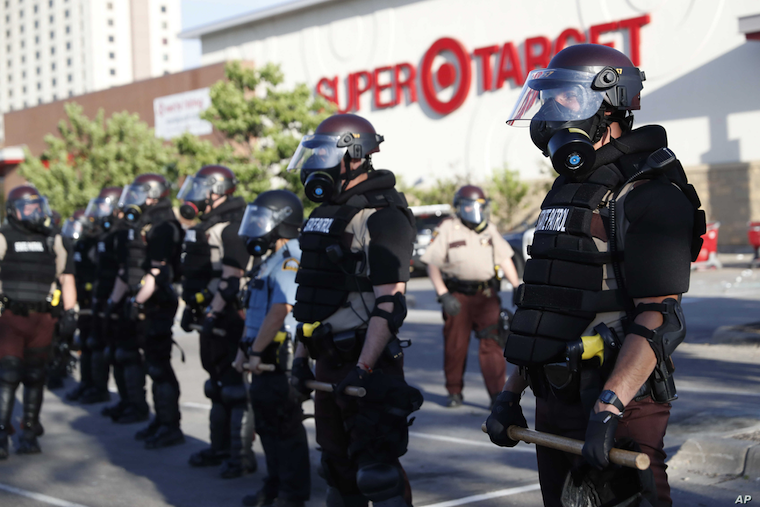 American companies typically are quiet during protests. Not this time.

Technology, banking, apparel and entertainment firms issued messages of support for those demonstrating against police treatment of black people.

“I am shocked by the number of executives who have spoken up for the first time,” said Kellie McElhaney, a professor at the Haas School of Business at UC Berkeley and founder of the Center for Equity, Gender and Leadership at the school.

What’s driving brands to speak out, she said, is the brutality of the video showing a police officer in Minneapolis putting his knees on the back of the neck of George Floyd, who died.

The companies “are run by humans,” she said. “They have black and brown employees, executives, customers. There is absolute risks but the benefit outweighs the risks by far.”

Netflix tweeted “to be silent is to be complicit,” adding “we have a duty to our Black members, employees, creators and talent to speak up.”

Google added to its main search page: “We stand in support of racial equality, and all those who search for it.”

To be silent is to be complicit.
Black lives matter.

We have a platform, and we have a duty to our Black members, employees, creators and talent to speak up.

Microsoft CEO Satya Nadella told employees to “join me and everyone on the senior leadership team, in advocating for change in our company, in our communities, and in society at large.”

“Racism continues to be at the root of so much pain and ugliness in our society,” Citibank chief financial officer Mark Mason, who is African American, wrote on a blog post. “As long as that's true, America's twin ideals of freedom and equality will remain out of reach.”

Retailers such as Target, which has been looted and vandalized around the country, have also spoken out. The death of a black man detained by a white police officer has unleashed the "pent-up pain of years," said the CEO of Target, which is headquartered in Minneapolis.

The risks of speaking vs remaining silent

By taking a stand, companies risk losing customers, partners, suppliers and employees who don’t agree with the corporation’s position, said McElhaney. They also risk being accused of using the moment to promote their brands since some may not see corporate statements of support as authentic.

But business also face risks if they say nothing, she said. Younger employees look to company leadership to speak out.

“I tend to believe that people are speaking up because there is no other option,” she said. “Every employee is looking to their leader to speak up, particularly black and brown employees.”

In 2018, Nike ran an ad in support of Colin Kaepernick, the former professional football player who protested police treatment of African Americans. Some people loved it. Some burned their Nikes. The contentious advertisement did not hurt Nike’s bottom line, according to reports.

As protests spread throughout the US after Floyd’s death, Nike released a video in support of the protesters’ message: "Don’t turn your back on racism. Don’t accept innocent lives being taken from us. Don’t make any more excuses.”

+1 #1 WADADA rogers 2020-06-01 19:32
If any one dared support such ideas that promote human rights in Uganda, you would be charged with treason, inciting violence and many others
Report to administrator
+1 #2 Lysol 2020-06-01 21:26
It's the economic of supply and demand for those companies. The COVID-19 pandemic locked their businesses down while the demands grew.

What better way to get rid of the old inventory, but to have them looted by
some angry demonstratorss, since they could not sell them.

All those companies have already got stimulas money from the government to reopen after the COVID-19 is contained.

Besides, they have liability insurance to cover the losses. They will always rebuild quickly with the aboundan resources they have. The American ways of life. The rest of the world should not rejoice because of what is going on right now.
Report to administrator
+1 #3 Jama 2020-06-02 14:08
What we watched was a direct murder, which doesn't require investigation since the evidence is tangible.

But what many could question themselves, why are the three other policemen not charged for complicity ?
Report to administrator
0 #4 Zzunguluzzungulu 2020-06-02 14:18
This time, I think racism is going to be addressed head on, since the perpetrators (whites) are at the forefront of the protest march.
Report to administrator
0 #5 Wooden K. 2020-06-02 16:37
Very sad that George Floyd was killed like that .RIP

I see and understand the outrage everywhere in USA

But I also know that racism and tribalism are twins , Hundreds of thousand of Ugandans have been klilled just because of the tribes they belong to.

So , I wonder if these angry African Americans are aware that in Uganda , our people get killed by armed forces `?

Do Americans know that over 150 Bakonjo was massacred in a single day and their naked bodies were dumped in mass grave ?

Do they know that George Floys Life has the same value as Yasin Kawuma who was shot by an agent who has never been charged for killing an unarmed Ugandan`?

If they don`t care , why should we ?
Report to administrator