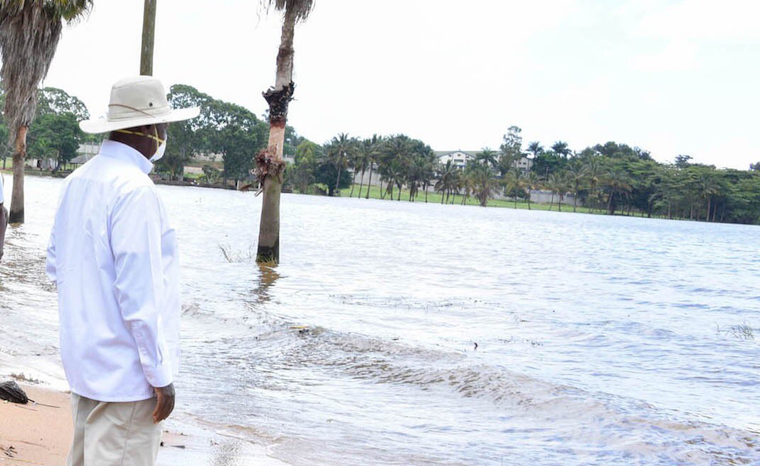 The rift between Uganda and Kenya over rising water levels in Lake Victoria has escalated further after five Kenyan nationals, sued Uganda for allegedly leading to the displacement of more than 50,000 people in Kenya around the lake.
Led by the former president of the Law Society of Kenya, Isaac Okero, Kenyan nationals accuse of failing to control floods around Lake Victoria when it allegedly breached the EAC treaty and the Nile basin comprehensive framework agreement on how much water Uganda is supposed to release from L.Victoria according to a report in the East African.
President Yoweri Museveni last month said Uganda was controlling the water level of Lake Victoria through its Nalubale hydropower dam in Jinja.
Accusations against Uganda over increasing Lake Victoria’s date as far back as 2005. Then, Kenya complained that Uganda was drawing much more water to run its Kiira and Nalubaale hydropower dams in Jinja.
At the time, Lake Victoria’s water levels were at their lowest in over 80 years. Now, reports indicate that Kenya is bitter that Uganda through the dams in Jinja is releasing less water, risking the lives and property of Kenyan around the Lake Victoria basin.

Kenya, whose towns like Kisumu have lately been flooded, fears that if more water is not released, more properties along Lake Victoria’s shores will be submerged due to rising water levels.

Kenya’s Kisumu governor Anyang' Nyong'o was recently quoted by the Nation newspaper calling on the East African Community (EAC) heads of states to urgently intervene over the alarming rise of Victoria water levels.

The intense rains that started around August last year, have raised Victoria’s water levels to a record 13.42 meters above sea level, beating the 13.41 meters record registered in 1964.

At an administrative level, Kenya is using the latest increase in water levels to push Uganda to enter negotiations for a regional policy governing the release of water in Jinja. The issue of a water release policy has already come up for deliberation at the East Africa Community.

It was fronted by Kenya following a contentious recommendation by Kenya-based hydrology experts. Uganda opposed the idea insisting that it could only negotiate if Kenya and Tanzania were to broaden the idea to include water abstraction.

Uganda insists that such a policy should not only look at the outflow but also at what is bringing water into Victoria. Over twenty rivers from the East African region contribute to the Lake Victoria basin. Uganda demands that L.Victoria be managed as a basin or a system.

Uganda Water and Environment ministry permanent secretary, Alfred Okot Okidi told journalists last week that Uganda is not bound by the policy suggested by Kenya because the matter was never previously resolved.

“Uganda objected to attempts to put a release policy based on a study. Our position as a country is that when you look at Lake Victoria, we should look at as basin - as a system. So, what we want for the benefit of people of East Africa for sustainability, is the release and abstraction policy. There are more than twenty rivers that feed into Lake Victoria, if they are not managed, opening tap at Jinja will be futile." Okidi said.

Several studies found that since the completion of the Owen Falls Dam, the release of water for hydropower generation has been based on an agreed curve between the British and Egyptian governments in 1954.

Under the agreed curve policy, water releases through the dam were to be determined by the prevailing water level. Water flows into the River Nile would be left as natural as if there was no dam.
Uganda, according to documented evidence, deviated from the agreed curve and released much more water from Kiira and Nalubale between 2001 and 2006.

At the time, the region had experienced below normal regional rainfall. Uganda was forced to over release of water for hydropower despite reduced net basin supply of water.

Uganda’s commissioner for Water Resources Planning and Regulation, Dr Callist Tindimugaya denies that Uganda’s refusal to release more water through Kiira, Nalubaale and Bujagali dams is responsible for the current flooding in Kisumu. Rising Lake Victoria water levels have also led to similar floodings along the lake shores in Uganda in Entebbe, Bugiri, Mukono among other areas.

“Whatever is happening in Kisumu is not connected to what Uganda is doing. Right now what we are doing is much higher than we have ordinarily been releasing. We had remained to release one thousand cubic meters per second, then obviously many places would be underwater. But the higher the water level, the more we release” said Tindimugaya.

According to Tindimugaya, Uganda is right now releasing more than two thousand four hundred cubic meters per second because the water levels have gone higher.

“If the level goes down, you will see us instructing the hydropower dams to reduce. Every day we are monitoring how the level is changing,” he added.

Tindimugaya says Uganda’s position is to ensure that water balance for L.Victoria by looking at the input and output quantities to ensure that the storage level is in the control.

In 2006, the East African Community, through the Lake Victoria Basin Commission ordered for a special probe into declining water levels of L.Victoria.

While the study asked the partner states to make deliberate efforts to reduce dependency on hydropower, it asked Uganda to construct a power station downstream of Nalubaale/Kiira power facilities. EAC and the other partner states were tasked to assist Uganda in this endeavour.
Uganda was tasked to reduce water releases at Jinja and move towards the agreed curve release policy. The EAC was by 2007 tasked with initiating a process to formulate and implement a new adaptive lake regulation policy, based on a modification of the old agreed curve.

The EAC partner states were asked to formulate and implement a watershed management program to reverse the decline in lake levels, restore its ecological integrity and enhance the sustainability of associated ecosystems and landscapes. Such a program should have included afforestation, wetland management and appropriate agricultural practices.

+4 #1 WADADA rogers 2020-06-01 19:44
Look at Museveni pretending that he is inspecting, what does he know about water levels, he is not a scientist, only pretending to be busy doing nothing
Report to administrator
0 #2 karemire 2020-06-02 00:51
Uganda's position on this issue is good for the country and the Lake Region as a whole. Stand your ground, Dear Uganda.
Report to administrator
-1 #3 Lysol 2020-06-02 18:23
Uganda is always playing mind games with Kenya. From occupying a Kenya's island to the SGR and refusing to use the inland port of Naivasha which Museveni personally strongly advocated for it.

Not to mention the pipeline for the oil which he changed to go through Tanzania instead. Unfortunately the weak leadership of Kenya seems not to know how to respond. Unlike Rwanda.

Many countries have gone to war over water disputes. History tells us.
Report to administrator