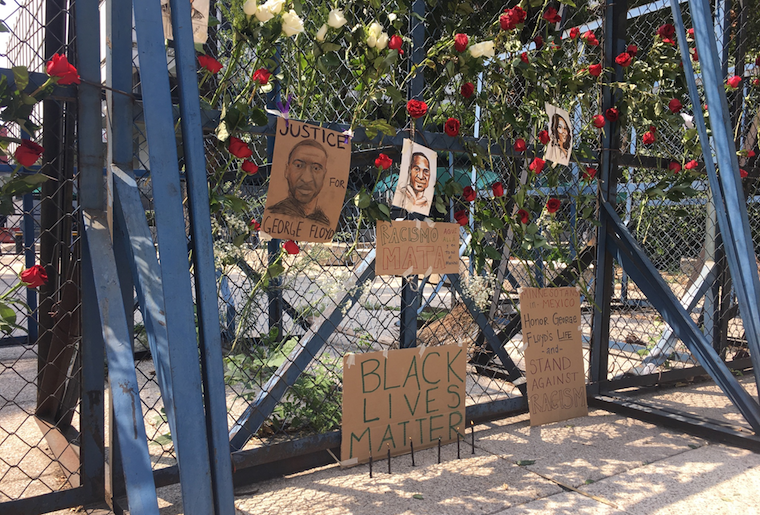 Tribute at George Floyd at the US Embassy, Mexico city

Protests were held in several cities around the world Saturday, in seeming solidarity with demonstrators in the US over the death of an African American man while in police custody earlier this week.

The US embassies in several countries drew protesters, angered by the death of George Floyd on May 25. Floyd died after a white police office kneeled on his neck for nearly 9 minutes. The incident was videotaped, and Floyd could be heard pleading several times, “I can’t breathe.”

In Berlin Saturday, thousands of Germans gathered outside the US Embassy, chanting “Black Lives Matter,” according to Forbes.

A protest about racism in general drew thousands Saturday in Toronto, Forbes reported.

On Friday, Canadian Prime Minister Justin Trudeau, referring to Floyd’s death, said in an article in The Washington Post, “Racism is real. It’s in the United States, but it’s also in Canada. … We know people are facing systemic discrimination, unconscious bias and anti-black racism every day.”

In Mexico City on Saturday, drawings and flowers in support of Floyd were attached to a fence near the US Embassy, according to social media posts.

Thousands now chanting “black lives matter” in front of the US Embassy in Berlin #GeorgeFloyd pic.twitter.com/Jh65RKhTLo

On Friday, UN High Commissioner for Human Rights Michelle Bachelet also condemned the circumstances surrounding Floyd’s death, which she said was the latest “in a long line of killings of unarmed African Americans by US police officers and members of the public.”

“I am dismayed to have to add George Floyd’s name to that of Breonna Taylor, Eric Garner, Michael Brown and many other unarmed African Americans who have died over the years at the hands of the police — as well as people such as Ahmaud Arbery and Trayvon Martin who were killed by armed members of the public,” she said.

Tibet’s spiritual leader, the Dalai Lama, said he had seen the video of Floyd lying on the ground with a policeman’s knee on his neck.

"Because of this discrimination, racism on the basis of race, such things are done," he said during a webcast on compassion Friday.

"We see in the news channels, the media, about discrimination on the basis of colour or religion these days, and then there is killing due to that, and then there are some who even take it as a pride to be able to kill somebody."

The African Union Commission on Friday issued a strongly worded rare public statement on the domestic events in the United States.

In the statement, the chairperson of the African Union Commission, Moussa Faki Mahamat, "strongly condemns" police conduct in the Floyd case and extended his "deepest condolences to his family and loved ones.”

+1 #1 Kabayekka 2020-05-31 22:48
It seems alright for black leaders to trample on the rights of fellow blacks with the international support of USA policy.

One understands that the USA up to now has refused to pay compensation for the miserable atrocities that were done to the black people for many years.
Report to administrator
+2 #2 Larry james 2020-06-01 07:32
Hating, dehumanizing, and propagating nonsense to put a human race beneath another is a sign of grave fear and insecurities about oneself.

Racial minorities have persevered through this ordeal for very many decades. It's been a race war started by racists who think America is theirs only.
Report to administrator
+2 #3 Akot 2020-06-01 17:46
Kabayekka, thanks.

This issue can only be handled when blacks begin to respect themselves, have good governance.

Black slaves built USA, yet it's them treated as the useless because blacks haven't taken their lives in their hands, but wait to be served & remain disorganized, but big mouthed!

Rich Black Americans pay taxes, give huge sums to charities, but haven't ensured the money is invested in businesses to provide jobs.

Who are blacks waiting for to give them the kind of living they want?

Look at Ugandans, +34 years, still waiting for migrant Museveni who tribalistically divided & rule them, to serve them!

Blacks MUST begin respecting themselves, buil their societies, communities, countries or their humiliation will never end!

Isn't it black Africans reduced to nothing by tribal leaders they bow/kneel down to, bare footed/in rags but with smiles?
Report to administrator
0 #4 Akot 2020-06-01 18:09
Larry james, thanks.

What's going on in USA should wake Ugandans to the inhumanity the tribalistic system they go along with!

Africans don't respect one another, have no humanity in governance, so how can they say racism is inhuman?

How can tribalistically divided & ruled Ugandans by a black migrant, be alright, yet Ugandans join black Americans to fight racism?

Black Americans, like tribalists Ugandans can only help themselves by beginning to take charge of their lives, working to ensure they have the kind of governance, lives they want!

Look at how blacks flood Europe, sing on streets for their rights to clean decent, housing, education, healthcare...!

Do blacks come out & claim for respect form balcks ruling them?

Black Ugandans help black Museveni enslave them, would they do so if he demo was white?
Report to administrator
0 #5 Akot 2020-06-01 18:47
USA racial chaos is chance for world to start giving chance to a start for developing countries! This will begin the moment USA/Europe STOP financing United Nations, on which dictators/useless ruelrs lie & continue to rule!

How can UN function for the benefit of the world when it's formed by well governed countries as well as those ruled by demons?

European Nation have weaknesses, but never allows dictatorship & ensures every nation is well governed for the benefit of the people who are assured of peace, public/social services indiscriminately!

Developed world MUST save the world by ending financing UN!

Africa, ruled by dictators, tribalists/racist useless rulers, have right to critisize Americans at this time, but they can learn from this racial uprising!...
Report to administrator
0 #6 Akot 2020-06-01 18:57
...USA racial killing, discrimination went on for years & finally sparked off by yet another black death!

It's time American blacks & Africans begin taking responsibilities for their lives by UNITING to begin building their societies, communities, countries & be able to fend for themselves & not blame others for what they have not done; ensure they are respected, well governed & treated as equals!

This, for Ugandans, begins by bringing down the tribalistic system, then UNITY, to show Museveni way out!

Ah! UN believed it was human confining Acholi in refugee camps in their own country, while killer dictator Museveni is treated as god by UN!

UN continues to bolster dictators, useless rulers by ensuring the very people who should UNITE to bring change, leave their countries & impose themselves on other countries?...
Report to administrator
0 #7 Akot 2020-06-01 19:13
...Thank you, USA president D. Trump for coming out to say NO to racial discrimination in your country. It's time blacks begin working to ensure their communities, societies, quarters are part of USA & be part of the country that black slaves, helped build!

It's time black Americans show the world they are part of USA & not a section of society discriminated against for stupid reasons!

Crying for help from the rest of the world & blaming others, while we isolate ourselves as blacks or tribes when we haven't developed & financially not independent, won't end discrimination against us!
Report to administrator
0 #8 Amooti Mugi 2020-06-01 21:08
African. Union should first look at Africa , the United States has capacity to deal with the errant police officer.

USA has gone as far as voting an African American president who left a very good legacy !!! No corruption, no stealing!!!

As long as the blacks keep looting, perpetuate corruption , no one will respect them...!!!
Report to administrator
0 #9 Charles Dicken Oruk 2020-06-03 08:27
The USA does not deserve to carry the mental of the Champion of Human Rights and the police of democracy around the world.

Human rights and democracy go together. No because I do not now why they (Ganda) look on when their Kingdom and King is under open prison.

Their children doing business always get their merchandise burnt in the market every year. This act turns them in to poverty yet they do nothing.

But in 1980 they were very organised to fight an elected government on lies and rumors.

Today, the King is there, every thing is normal. Violating one of them is a big crime. All international NGOs and other organizations that serves the interest of the world like the UN, HR, WB, IFM etc does not deserve to be in a country where human right violation of black is done in the open.
Report to administrator