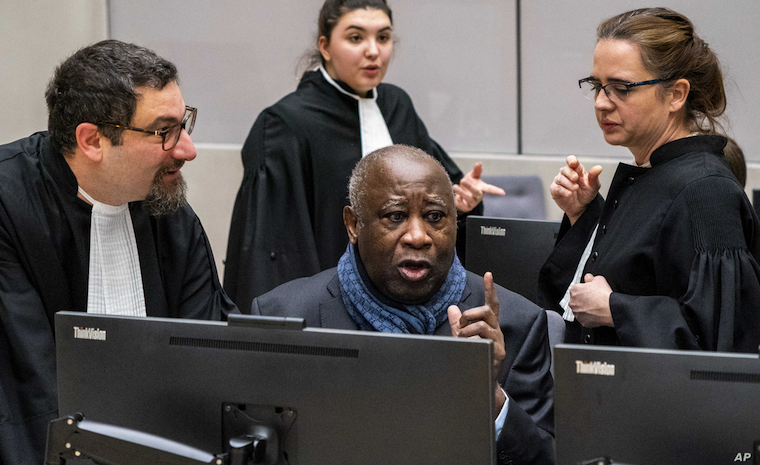 Former Ivory Coast president Laurent Gbagbo talks to his legal team at the International Criminal Court in The Hague, Netherlands earlier in February

The French News Agency (AFP) said the ICC is allowing Gbagbo to leave Belgium, which agreed to host him after his arrest, provided he return to court for the prosecution's appeal of his not guilty verdict.

Gbagbo was the first head of state to stand trial in The Hague.  He and his deputy Charles Ble Goude were cleared of crimes against humanity in early 2019, eight years after his arrest.

It is unclear if Gbagbo will return to the Ivory Coast, which is heading toward a presidential election in October. An ICC spokesman said wherever Gbagbo decides to go, the country must approve his stay.

Gbagbo and his deputy denied any wrongdoing in connection with the violence that followed a disputed vote in Ivory Coast in 2010.

Did Ugandans bring charges against Amin?

Ugandans are alright going along with the inhuman tribalistic system that shuts developed world out, but protects Museveni & locks them with him!

Getting at, blaming Museveni by outsiders would mean getting at/blaming Ugandans & imposing change on them!

Ugandans cried out against Amin even when they were powerless, but were not tribalistically divided & ruled by the monster & devleoped world sided with Ugandans, right?

Ugandans can change their minds & say NO to the tribalistic system to become part of today world again & get help form developed world!
Report to administrator
0 #2 Kabayekka 2020-05-31 22:55
It is a very unfair deliberation indeed. One would not be surprised if this African gentleman goes home and again try to participate in those national elections!
Report to administrator