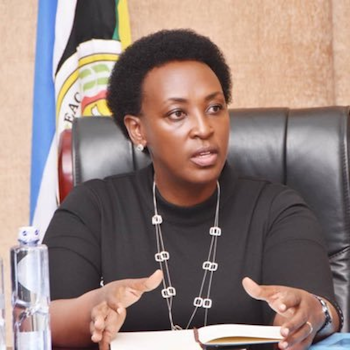 In December 2019, Molly Nawe Kamukama was elevated from a presidential principal private secretary, a job she held since November 2016, to minister of state for Economic Monitoring under the Office of the President – catapulting her from the fringes of politics onto the national stage.

In this interview, Kamukama talks about her new ministerial responsibilities and the political fights she has so far had to contend with in so short a time.

What do you do as minister of economic monitoring?

The Economic Monitoring ministry looks at all the sectors on which the economy stands. They are primarily four; agriculture, industries or the manufacturing, services and the ICT. We are working on the fifth sector which is oil and gas. At the ministry, we work with other players or enablers in the economy.

So, when we are looking at monitoring the economy, you look at how all these sectors are functioning, the role of government, what we are doing and not doing.

We also look at how the support services of government are interlinked; the roles of ministries and then we report to the head of state, recommending what government needs to do to support economic growth. When I came in, I found the ministry doing quite well. So, our role is to see that everything is working and whatever is not working is reported and corrected.

How does government plan to repair the long-term damage Covid-19 has inflicted on the economy?

The first thing to do as a country was to worry about life. We should thank the president who has spearheaded this campaign to keep us safe because the most important business for 2020 I think is being safe.

Secondly, it is also very clear that most sectors, especially the service sector, have been hit very hard. Tourism, the media, I am sure even hospitals are receiving less patients now.

It is also true that there is already loss of jobs in the economy and we are also going to see long-term effects in some sectors, especially tourism. Even the manufacturing sector has been affected because it is quite difficult to export and the demand is low. People are not active; so, the demand is suppressed.

How can your ministry help sectors recover from the ravages of this pandemic?

As a ministry, we are working with all sector players like the ministry of Finance and Bank of Uganda to evaluate sectors worst hit by Covid-19. We can’t come up with a policy as an entity alone but we are also looking at the economic recovery in a holistic way. So, cabinet will sit and come up with interventions to the economy.

The president will tell the country what role government will play but already we are putting money in Uganda Development Bank because that’s where manufacturing will access funding.

What can Ugandans do individually to recover?

I implore Ugandans to continue being active in the agricultural sector by cultivating. We need food. I call upon all village chairpersons and our local leaders and local administration to encourage our people to cultivate food as usual. We need to remain self-sustaining in terms of food so that we don’t have a food shortage in the aftermath of Covid-19.

In your former job as presidential principal private secretary, social media was awash with reports that you amassed a lot of wealth through corruption.

Those allegations are a distraction and dangerous to society. It is morally wrong for someone to wake up and malign a person.

And those making the allegations should be held legally liable – because if you say so and so is corrupt and say I have buildings on Dewinton road, Kampala road or whichever road they are mentioning, why not report these to the authorities instead choosing to slander me through social media?

It is not true that I acquired all that illegal wealth and now I am promoted from permanent secretary to a minister. It is an insult to the appointing authority; it is an insult to me as well. I would like to call upon the people who are writing those things and who by the way are known to me first, to know that it is a crime.

But I also want to warn the perpetrators that these baseless allegations may end up in courts of law. We shall take them on legally because they are committing cybercrime by instigating such allegations on social media.

Who is the source of these allegations?

As I noted, the perpetrators are known. Some are officers of government. One of them works at the ministry of Foreign Affairs. But all this emanates from back home in Kazo district. They are trying to malign me before the people of Kazo. But the people of Kazo know what they want. You can’t stop that by telling all these lies.

The president has been sucked into the allegations. Why?

I have met the DHO of Kazo once. I had taken my part of the Covid-19 relief. That was the last I talked to him. Two days later, I saw people on WhatsApp saying I am the one who fired him. I had no idea about his firing or who ordered it.

They say it came from cabinet but all the cabinet meetings I have attended there was nothing like that. I have never talked to him even on phone. As minister, I have no business dealing with technical staff. So, I will interest myself in trying to find out why he was interdicted but the most important thing is that Kazo as a district must have a medical officer, especially in this time of Covid-19.

You are running for Kazo district Woman MP in the coming elections. What is your agenda?

Kazo for me is a passion! First and foremost, I am glad that I can have time to go back to my area and make my small contribution. It is a district where I was a born, raised, went to school, and where I am married. So, it’s an area that is dear to my heart. Of course as a leader, I have a mission and purpose.

There are a lot of things that government can provide. And as part of government, I will try to see that whatever government is supposed to do in the district, is done properly. That is roads, power, water, education and health.

But there is also a bigger problem which I am more passionate about, which many leaders aren’t talking about yet it is very crucial. The issue of household income is very important to me and it is something that is lacking in our area and generally Uganda.

What is your final word?

We are still in Covid-19 time; it is still with us. I call upon Ugandans to wear masks, wash their hands or sanitize.