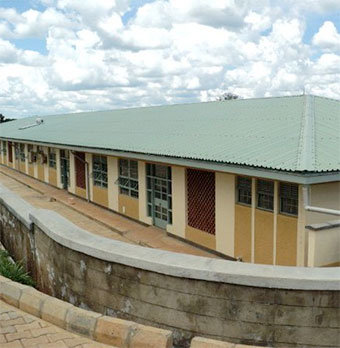 A section of Nakaseke hospital

Nakaseke hospital is struggling to feed the 33 contacts to a COVID-19 positive truck driver currently quarantined at the facility.
The truck driver was intercepted at Katuugo village in Wakyato sub-county, Nakaseke district on Tuesday last week after testing positive for COVID-19 at Elegu border testing point.

The Nakaseke district surveillance team and task force on COVID-19 traced the contacts who were quarantined at the isolation centre of Nakaseke hospital. Most of the contacts reportedly sold tomatoes or helped load tomatoes for the positive driver. Now, Nakaseke hospital says it is financially constrained to look after the 33 contacts for next 14 days due to lack of money and food.

Mariam Kaberuka, the chairperson of the Nakaseke hospital management committee says that the contacts are sleeping in the cold over lack of bedsheets at the isolation centre.
Kaberuka adds that the isolation facilities are supposed to handle a maximum of only 15 contacts, yet the number doubled making it difficult to observe the recommended physical distancing guidelines. Kaberuka adds that because of huge numbers they have run out of food.

"We can’t manage them at the moment. Because of the little funds that we do receive from the government, at the moment we’re holding those people in isolation rooms. These rooms have no TVs, these rooms have no radios [and] we have to feed these patients - break, lunch and supper as we’re monitoring them. But as a hospital, we can’t manage based on the funds that we get. We need to maintain these people with all the meals. Its is a big challenge to us," she said.

Ntumwa Matovu, the Nakaseke hospital administrator says that they have requested a local hotel to supply food on credit even though they don’t have a vote to clear the debt. Ntumwa adds that even the health workers who are observing the contacts have inadequate personal protection equipment (PPE).

He added that they received only Shs 7 million for COVID-19 related activities but this was planned to cater for allowances and feeding health workers. Ntumwa says that as a result, they have resolved to refer some contacts to Mulago hospital to decongest the isolation facility and be able to cut on costs of operation.

Ignatius Koomu Kiwanuka, the LC V chairperson Nakaseke says the food relief items donated by area MPs and other well-wishers to the task force were distributed among the starving residents leaving the stores empty. Kiwanuka says the contacts are being treated like prisoners at the facility.

Fred Nayebare Kyamuzigita, chairperson of Nakaseke district task force on COVID-19 says they have identified the gaps at an isolation facility and are mobilizing resources to address them.

Both Kyamuzigita and Koomu did not give details about the Shs 165 million advanced to the district for COVID-19 related activities were utilized. Uganda has so far registered recorded 212 confirmed cases of COVID-19 among nationals.