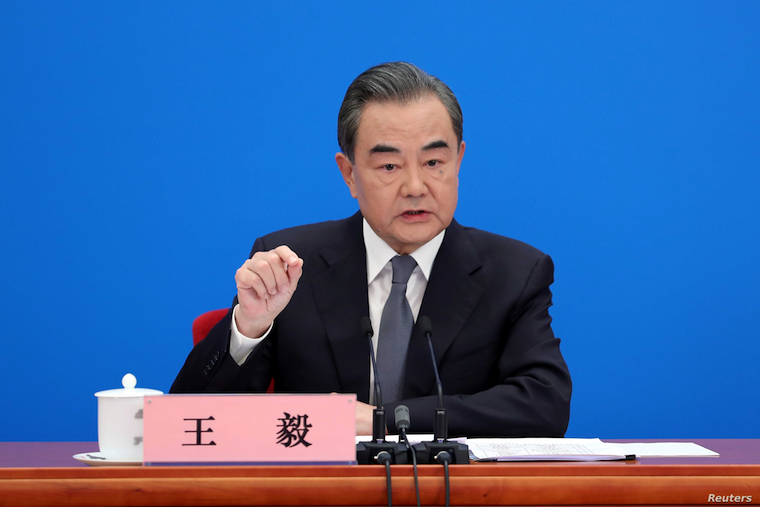 Chinese Foreign Minister Wang Yi speaks to reporters via video link at a news conference held on the sidelines of the National People's Congress (NPC), from the Great Hall of the People in Beijing, China, May 24, 2020

China says some “political forces” in the United States have taken bilateral relations hostage and are pushing the world’s two biggest economies towards “a new Cold War.”

Speaking on the sidelines of the National People’s Congress in Beijing Sunday, Chinese Foreign minister Wang Wu said “a political virus is spreading in the United States” which is “using every opportunity to attack and smear China.”

Wang said China has no intention to either change or replace the US, and that the US should abandon its “wishful thinking of changing China and stopping 1.4 billion people in their historic march toward modernization.”

The Trump administration has clashed with Beijing over a range of issues in recent months, including trade, technology, and the coronavirus pandemic, with President Donald Trump himself alleging the virus escaped from a lab in Wuhan, the central Chinese city where the virus was first detected late last year.

It should just apologize to the world and be held accountable.
Report to administrator
-1 #2 Kabayekka 2020-05-26 08:53
Interesting article. After America helped to win the World War II, now wants to rule the world like Germany did?

That is unfair. This international problem should be named the Trade War. It was America that started it all by removing the Gold standard of international currency and imposing its local currency on Planet Earth!
Report to administrator
+1 #3 Kabayekka 2020-05-26 08:57
Soon the local currency of the dollar will be the official currency in outer space, the moon, and Mars!
Report to administrator
0 #4 Big Ben 2020-05-26 09:33
Lysol, that is wishful thinking. China is not the USSR. It is a semi-capitalist economy which might even have already surpassed the US economy by now. So, do not expect it to collapse any time soon.

Also, where did HIV start? Why didn't we blame that country for bringing HIV? Covid-19 cannot be called the Wuhan virus because disease nomenclature is not based on the "origin" of a pandemic!
Report to administrator
0 #5 WADADA rogers 2020-05-26 12:38
I think Trump has been very provocative, he has constantly used the word the Chinese Virus as opposed to corona virus and it is clear that his intention is to provoke and to annoy the Chinese to react but they have been cool and civil in handling the insult.