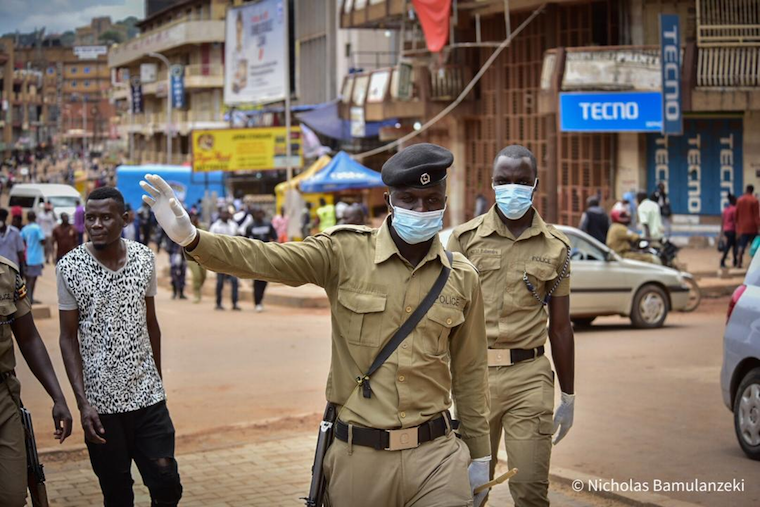 Police boss Martins Ochola has ordered for an investigation into allegations of police officers swindling COVID-19 allowances for junior officers.

The money was for 25,977 police officers who have been performing various roles implementing the anti-coronavirus guidelines. Bakasumba’s letter indicated that each senior officer was to receive Shs 120,000 while junior policemen and policewomen were supposed to receive Shs 110,000 each for the 10 days.

Bakashumba explained that the money had been sent to the respective stations where the officers are attached. Besides, he indicated that it had been distributed according to the number of police officers attached to task forces from every station.

A source revealed that by the end of last week, the number of complaints had reached 700 but it jumped to more than 1,000 by Wednesday this week.

“Several officers are complaining that they are being told to sign half of what they are supposed to get. Others say they haven’t received the money yet it is more than a week since the allowances were delivered at various stations. This is why IGP has ordered for an impromptu probe by PSU,” a source revealed.

Byaruhanga whose 428 health workers are involved in the national task force, warned that action will be taken against division and district police commanders for swindling the allowances.

Uganda police force received a supplementary budget of Shs 37 billion to cater for COVID-19 expenses which include allowances for police officers, procuring gloves, fuel, food and masks. Even though the latest figures indicate police force’s numbers at 41,760, Bakasumba released allowances for only 25,977 people.

According to Bakasumba’s statement, some of the police units show all their officers incorporated in the joint security task force. For instance, Counter-Terrorism’s entire force of 4,483 was involved in COVID-19 operations, followed by Anti-Stock Theft Unit (ASTU) with 1,150 officers, 999 Patrol Unit with 289 and Air Wing with 36 personnel.

If they can steal from one of their own, then what can they do to a civilian?

Next time these junior officers find themselves among us I just hope they remember that the way they are treated by their institution shouldn't warrant them beating us or even killing us.
Report to administrator
+1 #2 Amooti Mugi 2020-05-22 05:48
There you are!
Who was the pay master?

Wire the allowance directly to the accounts of the recipients than pass it thru many hands.
Report to administrator
+1 #3 Odongkara 2020-05-22 12:22
No change pakalast! The Uganda we know as a country of "For God and my Country" has gradually changed to a country of "For my Stomach and my Tribe".

Elections are just around the corner and naive Ugandans will still vote for the same status quo. We are totally bewitched.
Report to administrator
0 #4 Akot 2020-05-22 17:01
Larry james, thanks.

It's "the people" who ensure they have the right leader & Ugandans MUST either;

- tribal leaders MUST stand down so that UNITY brings an end to Museveni!

Museveni is concluding 35 years & won't let go, unless Ugandans want him to!

Is keeping Museveni on safer than Reformed Republic or Independent Tribl States?
Report to administrator
0 #5 Akot 2020-05-22 17:11
Amooti Mugi, thanks.

Museveni is going no where with or without elections & those in posts will do their best to get hand outs from the god while he will continue to buy off those who are a threat to him, with his tax money!

Elections are just around the corner and naive Ugandans will still vote for the same status quo. We are totally bewitched.

There you are!
Who was the pay master?

Wire the allowance directly to the accounts of the recipients than pass it thru many hands.

Good point and excellent observation. Is it only the police force where money passes through many hands? Something fishy here.
Report to administrator
0 #8 Stephen Nuwagaba 2020-05-23 09:57
There is more than what meets the eyes!!! You want to tell me that these guys dont have banks accounts where money can be wired direct???

May be its intended and that way its hard to avoid being cheated by the superiors.In this era and you still dispense cash!!
Report to administrator