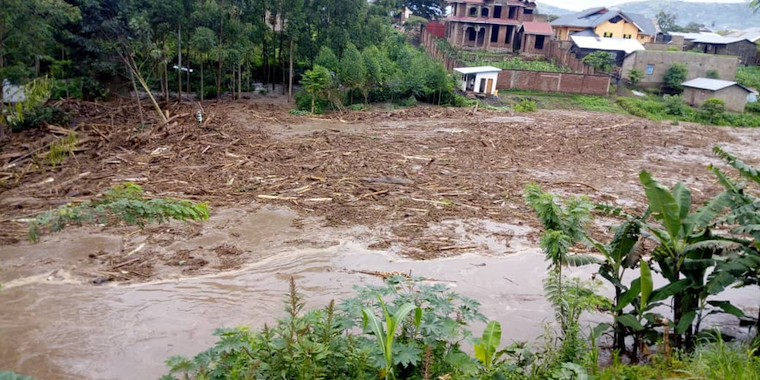 Flash floods have killed at least eight people and displaced hundreds of people in Kasese district.

One person identified as Monday Fanahasi Kabaliko, 35, from Kitholhu sub-county was rescued and is now admitted at Kanyatsi health centre.

Joshua Masereka, the Kasese deputy resident district commissioner says that efforts are underway to retrieve the bodies. Masereka also says the main Lubiriha bridge that connects Uganda to the Democratic Republic of Congo has also been swept away. Fredrick Sonko the UPDF Mountain Brigade spokesperson said three soldiers were rescued from the floods and taken for medical treatment.

Sylvester Mapozi the mayor Mpondwe town council, says lots of properties which include bridges have been damaged by the floods which has affected the movement of trucks to and from DR Congo.

The Leader of Opposition in Parliament Betty Aol Ocan who is in the district to assess flood situation wants the government to do a compressive study on the nature of the mountain and offer solutions to the perennial floods.

Two weeks ago floods hit the same district after River Nyamwabwa and Mubuku burst their banks. The floods also affected the operations of Kilembe Mines hospital after they washed away the medical store, kitchen, surgery rooms, private wards, and the drug store.

#KaseseFloods: It gets worse for #Kasese as R.lhubiriha bursts it's banks again, causing heavy flooding. Several people living nearby are feared dead/ missing and some roads cut off via @UgandaRedCross pic.twitter.com/oaIm0Ot3wf