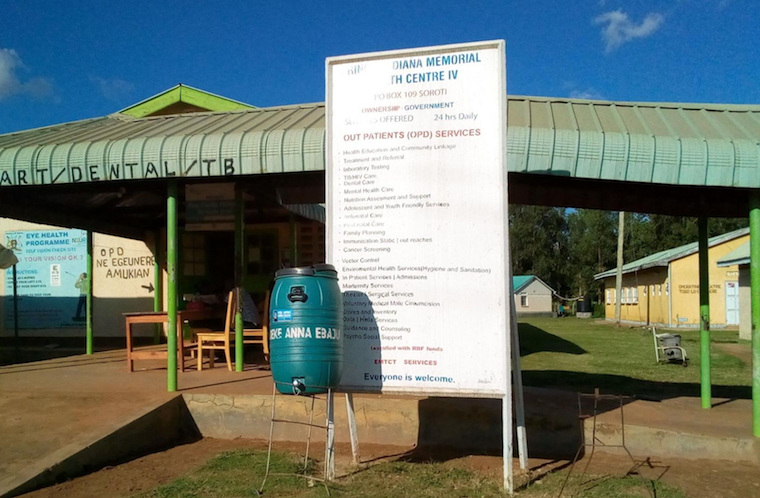 Entry to the OPD at Princess Diana Memorial HCIV

The workers are concerned that despite the high-risk exposure, Soroti hospital isn’t providing enough PPEs to health workers to enable them to execute their duties. The facility has been receiving only 20 pieces of masks every week against the total number of 34 staff on duty each day.

Dr Alfred Anyonga, the in-charge of the facility says that they have been getting masks from other health service providers like The Aids Support Organization (TASO), Soroti regional referral hospital and the COVID isolation centres among others.

He explained that much as they are struggling to access PPEs, the number of patients seeking treatment at the facility has increased from the usual 150 patients a day to not less than 200 patients, over the last month.

"Right from the time coronavirus disease outbreak started, Princess Diana has never received support of supplies mostly like masks of adequate quantity that we can use. And yet at this time, we expected a lot of support from government both central and local. The district has been trying to give us an average of 20 masks in a week. It was such a difficult time but we have been surviving on borrowing from TASO, Gulu regional referral hospital. Sometimes from the quarantine centre. It has reached a point whereby all those facilities have run short of masks." Anyonga said.

Some expectant mothers at the maternity ward were left unattended to. Joyce Asayo, an attendant to Doreen, the mother in labour says they arrived at the facility at 1 pm on Tuesday but were not attended to by any health worker.

Asayo said that even after she tried to reach out to the midwife on duty, they received no help. The mother, who came from Omagoro village, Arapai sub-county said she would wait since she had nowhere else to go.

The hospital staff could be seen seated at the entrance to the outpatients' department but doing nothing. They said that all the patients of the day had gone back after getting treatment.

“At least today [Wednesday], we attended to some patients with masks delivered by the district yesterday. We received 100 pieces of masks yesterday when the bosses heard that we were not working. We cannot do much without the required protection in this coronavirus”, one of the female nurses said.

Moses Otimong, the Soroti town clerk, when contacted said the issues of masks had been presented to the district taskforce and ministry of Health.

Dr Anyonga said that the staff had grievances with deductions in the quarterly releases to the facility, that have affected operations. He revealed that much as other health facilities have received fourth-quarter funding, Princess Diana had not yet received any releases from the municipality. But Otimong, in his response said the issue has been sorted.

Prince Harry! Come and see this!

Does that hospital have an administrator? Was money for PPEs stolen along the way???

Are the PPEs themselves stolen?