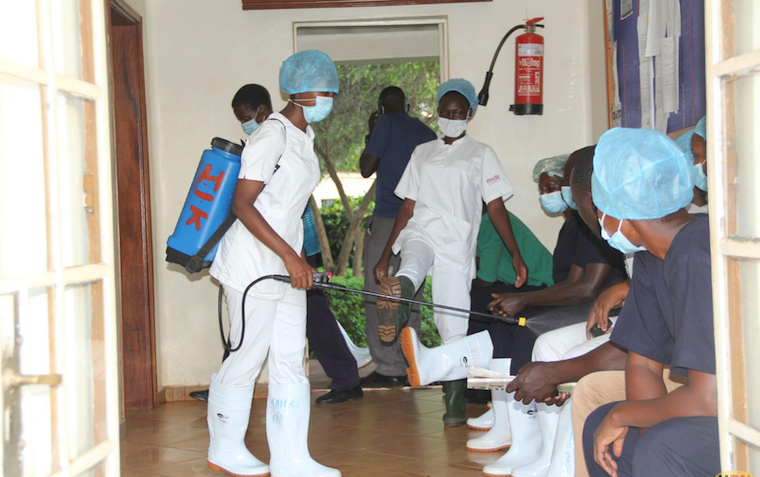 Nurses at the Jinja COVID-19 isolation centre have declined to usher in a new patient in protest over unpaid allowances and lack of communication from the hospital administrators.
The new patient was taken to the hospital at around 3 pm on Wednesday. But instead of undertaking the routine admission process, the nurses stormed out of the isolation centre and pitched camp at the hospital’s administration block.
They stated that although the ministry of Health had informed them about a risk allowance of Shs 80,000 per day, the hospital administrators had instead given them Shs 60,000 without any explanation.

By 8 pm when this reporter visited the isolation centre, the patient was still stuck in the ambulance. A nurse who spoke to us on condition of anonymity said that they have declined to attend to the patient because the hospital administrators have failed to address their grievances.

"We want our issues sorted before the patient is ushered inside. We’ve been sending our leaders to the director and we don’t get a good feedback from her. So today we decided to go there and face her. Before anything is done, before we usher in the patient, our issues must be clarified," he said.

Another nurse who also declined to mention his name so as to speak to us freely says that the hospital administrators have never inspected the isolation facility, leaving the nurses to design the different zones on their own yet most of them lack such expertise.

"The worst is, since the work started, they [administrators] have never visited the isolation. None of the hospital administrators has visited. All along we have been struggling with how to design the place. So since we love our country, we love our COVID patients we’re treating them. So today, let her come and explain very clearly the terms and conditions of why we’re here. There’s one patient they have brought, he’s still there stuck in the ambulance in front of the isolation unit. She’s over delaying because we want to go and usher in the patient, the patient is innocent," added another.

An intern nurse at the site told URN that they struggle to handle patients and are dissatisfied with the hospital’s reluctance in attending to their demands.
"We have risked our lives, from the suspects to actual patients. It is not easy, we have done everything properly but they don’t know what is taking place there. We suffocate, they should understand. This is our lives." she said.

Meanwhile, Florence Tugumusirize, the hospital director told journalists that the issues raised by nurses were being addressed but refused to divulge into details.

Uganda currently has 145 confirmed coronavirus cases after the figures were revised from 264 at the urging of President Yoweri Museveni to remove cases of foreign truck drivers.

0 #1 Kelly 2020-05-21 16:56
If only God can hear our prayers for once, let Covid-19 start with those (in)-decision makers beginning with the occupant of plot 1, Nakasero and then permeate to members of the immediate family.

May be, just may be some sense of fear and panic will be created.

Really does it need rocket science to see that medical workers should have been first on the supplementary budget sheet?

Workers are protesting against administration & not against patients, right?

What will happen if covid-19 spreads in Uganda as in USA, Brasil, Italy, Spain, France, UK ...