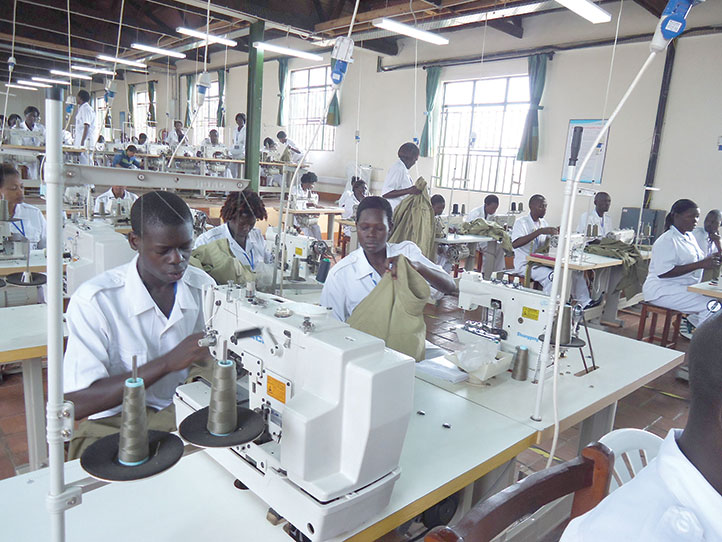 The police garment factory has produced more than 100,000 cloth masks for distribution among its officers. The police advisory committee resolved in its meeting held on April 8, 2020, to use its garment factory to produce face masks for more than 41,760 policemen and policewomen to minimise expenditure.

According to sources, the inspector general of police, Martins Okoth Ochola told the meeting that it would be costly to import the masks for all police officers compared to buying materials and producing them using their own staff at the factory.

Now, Dr Moses Byaruhanga, the director of police health services, says the factory has so far produced more than 100,000 cloth masks, which have already been distributed to police officers and other people living in barracks.

Dr Byaruhanga explains that police officers in high-risk areas particularly at border points such as Mutukula, Malaba and Elegu have received the N95 and KN95 respiratory masks.

The N95 and KN95 masks provide 95 per cent protection since they are able to trap even the tiniest particles of airborne and highly contagious diseases such as COVID-19.

According to Byaruhanga, the police cloth masks are made of three layers and are reusable. He, however, cautions that reusable masks can also be dangerous if they are not properly handled. He cautions officers against touching the reusable masks with dirty hands; masks should be washed and ironed regularly.

Two police officers have since tested positive for COVID-19 on May 1 and 2 in Masindi and Rakai districts respectively. The garments factory was commissioned by President Yoweri Museveni on September 30, 2014, to produce police uniforms to cut costs of importation.

The former police chief, Gen Edward Kale Kayihura said the factory was as a result of a public-private partnership with a Chinese company, which offered equipment while the force provided space.

The now-retired director of logistics, Godfrey Bangirana, said over 70 police officers had undergone training in China to acquire skills and more than 200 people majorly spouses to police officers were to be employed by there.