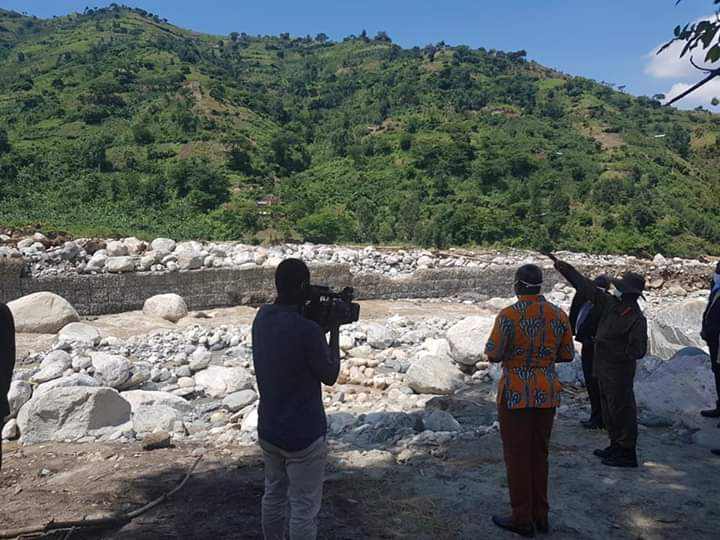 Opposition legislators were blocked by security from leaving their rooms at Sandton hotel in Kasese ahead of President Yoweri Museveni's assessment tour of the flood-hit Kasese district.

More than 120,000 people have been displaced and property worth billions of shillings lost after rivers Nyamwamba, Mubuku, Nyamughasana and Lhubiriha burst their banks twice causing flash floods that washed away everything in their path.

Today, President Museveni flew to Kasese aboard a military helicopter to assess the impact of the floods and also hold meetings with the local leadership to formulate long term solutions to the perennial flooding.

The impact this year has been more destructive than in recent times, with Kilembe Mines hospital and Bulembya primary school Kilembe destroyed by boulders washed downhill.

A delegation of MPs including the Leader of Opposition in Parliament (LoP) Betty Aol Ocan, Kalungu West MP Joseph Gozanga Ssewungu travelled to the same area yesterday to assess the impact of the floods and government's response.

But the MPs claim they were prevented from leaving their hotel by security. Security told reportedly told them they have to wait until the president is out of the area before resuming their activities.

Ssewungu says they were surprised to find heavy deployment at the hotel in the morning yet they are in the area for official parliamentary duty and were scheduled to visit the victims of the floods.

"Mr Museveni was aware that Kadaga was this week coming to Kasese to look at the effects of the floods. And you know in his panicky mode and the battles he has [with] parliament and himself, he, himself also had to come. But our program, we came from Kampala not aware that the president is coming here. I have just been talking to Crispus Kiyonga, HE the ambassador of China, I asked him is the president going to Bwera, he said no. How do you stop me a member of parliament to carry out my duty because Museveni is in Kasese. He’s not going to be in every part of Kasese," said Ssewungu.

Ssewungu says various delegations have been dispatched to different regions to assess the impact of floods ravaging the country amid the coronavirus pandemic. According to him parliament dispatched one delegation to Kasese and another to the flood-prone Bududa in eastern Uganda.

"One delegation has gone to Bududa, for us we’re here. But every soldier is panicking because of this 30-year ruler. He [Museveni] thinks that we can’t carry out business when he’s in a particular area. It could only be bad and dangerous if we meet him where he’s meeting his people. But if we’re going outside Kasese over 40km from where he is - meaning that if he’s in Kampala people can’t walk. That is unfair for a 30-year ruler. We have come to Kasese specifically with the Leader of Opposition to look at the impact of the floods and see the initiatives government has put in, what has the minister of Disaster Preparedness done for the people of Kasese." added Ssewungu.

Ocan, in a phone interview from her hotel room, said that they decided to visit flood-hit areas as legislators so as to present the concerns of the affected communities from an informed position. She, however, says they were surprised when police officers informed them that they couldn’t leave their hotel room until the president is out of the district.

"We should be free, this is a free country…it would be my decision to attend the president’s function or not. Sometimes the way people behave is very funny," said Ocan.

Ocan noted that they will continue with their program once the president leaves the district, saying the president seems to be working under pressure to contain parliament. Journalists were also blocked from covering the president’s tour in Kilembe on grounds of implementing the Covid-19 social distancing preventive measures.

Police couldn't be reached for a comment. In a related development, Kyadondo East MP Robert Kyagulanyi aka Bobi Wine donated Shs 13.5m to help the Kasese floods victims. He handed over the money to Kasese Woman MP Winnie Kiiza who is spearheading the fundraising drive for the flood victims. Bobi Wine said the money was contributed by his People Power movement comrades within and outside Uganda.