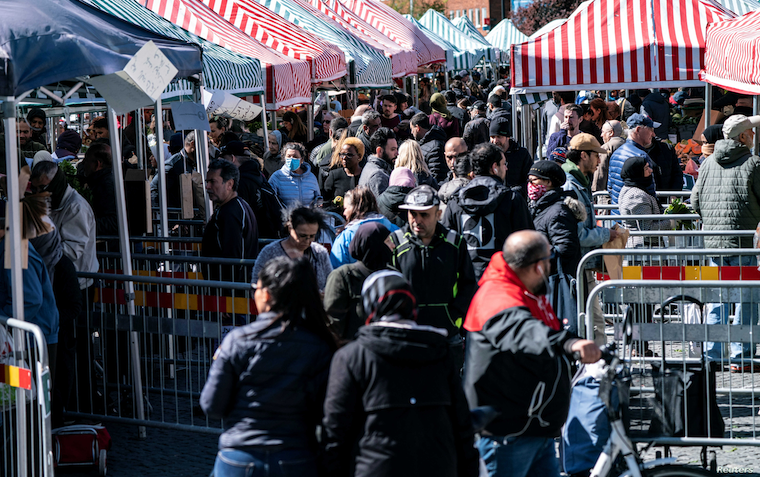 People buy vegetables as the fences and information signs are placed to reduce congestion due to the coronavirus disease (COVID-19) in Mollevangstorget, in Malmo, Sweden, April 25, 2020

China placed 50 million people under quarantine in Hubei Province in January. Since then, many liberal democracies have taken aggressive authoritarian measures of their own to fight the novel coronavirus.

By mid-March, almost all Organization for Economic Cooperation and Development (OECD) countries had implemented some combination of school, university, workplace, and public transportation closures; restrictions on public events; and limits on domestic and international travel. One country, however, stands out as an exception in the West.

Rather than declare a lockdown or a state of emergency, Sweden asked its citizens to practice social distancing on a mostly voluntary basis. Swedish authorities imposed some restrictions designed to flatten the curve: no public gatherings of more than 50 people, no bar service, distance learning in high schools and universities, and so on.

But they eschewed harsh controls, fines, and policing. Swedes have changed their behaviour, but not as profoundly as the citizens of other Western democracies. Many restaurants remain open, although they are lightly trafficked; young children are still in school. And in contrast to neighbouring Norway (and some Asian countries), Sweden has not introduced location-tracing technologies or apps, thus avoiding threats to privacy and personal autonomy.

Swedish authorities have not officially declared a goal of reaching herd immunity, which most scientists believe is achieved when more than 60 per cent of the population has had the virus.

But augmenting immunity is no doubt part of the government’s broader strategy —or at least a likely consequence of keeping schools, restaurants, and most businesses open. Anders Tegnell, the chief epidemiologist at Sweden’s Public Health Agency, has projected that the city of Stockholm could reach herd immunity as early as this month. Based on updated behavioural assumptions (social distancing norms are changing how Swedes behave), the Stockholm University mathematician Tom Britton has calculated that 40 per cent immunity in the capital could be enough to stop the virus’s spread there and that this could happen by mid-June.

Sweden has won praise in some quarters for preserving at least some semblance of economic normalcy and keeping its per capita death rate lower than those of Belgium, France, Italy, the Netherlands, Spain, and the United Kingdom.

But it has come in for criticism in other quarters for exceeding the per capita death rates of other Nordic countries and in particular, for failing to protect its elderly and immigrant populations. People receiving nursing and elder-care services account for upward of 50 per cent of COVID-19 deaths in Sweden, according to Tegnell, in part because many facilities were grievously slow to implement basic protective measures such as mask wearing.

Immigrants have also suffered disproportionately, mainly because they are poorer on average and tend to work in the service sector, where working remotely is usually impossible. But Swedish authorities have argued that the country’s higher death rate will appear comparatively lower in hindsight.

Efforts to contain the virus are doomed to fail in many countries, and a large percentage of people will be infected in the end. When much of the world experiences a deadly second wave, Sweden will have the worst of the pandemic behind it.

When much of the world experiences a deadly second wave, Sweden will have the worst of the pandemic behind it. Sweden’s response has not been perfect, but it has succeeded in bolstering immunity among the young and the healthy—those at the lowest risk of serious complications from COVID- 19—while also flattening the curve.

The country’s intensive care units have not been overrun, and hospital staffs, although under strain, have at least not had to juggle additional childcare responsibilities because daycares and lower schools continue to operate.

Whether or not they have openly embraced the Swedish approach, many other countries are now trying to emulate aspects of it. Both Denmark and Finland have reopened schools for young children. Germany is allowing small shops to reopen.

Italy will soon reopen parks, and France has a plan to allow some nonessential businesses to reopen, including farmers’ markets and small museums, as well as schools and daycare centers. In the United States, which has by far the highest absolute number of reported COVID-19 deaths, several states are easing restrictions at the urging of President Donald Trump, who despite bashing the Swedish model, is pushing the country toward something very similar.

There are good reasons for countries to begin easing their restrictions. It will take several years to tally the total number of deaths, bankruptcies, layoffs, suicides, mental health problems, losses to GDP and investments, and other costs attributable not just to the virus but to the measures used to fight it.

It should already be obvious, however, that the economic and social costs of lockdowns are enormous: estimates from the OECD suggest that every month of pandemic- related restrictions will shrink the economies of advanced countries by two percent. France, Germany, Italy, Spain, the United Kingdom, and the United States, according to the OECD, will see their economies shrink by more than 25 percent within a year.

Unemployment is rising to levels unheard of since the 1930s—fueling political backlash and deepening social divisions. Lockdowns are simply not sustainable for the amount of time that it will likely take to develop a vaccine.

Letting up will reduce economic, social, and political pressures. It may also allow populations to build an immunity that will end up being the least bad way of fighting COVID-19 in the long run.

Much about the disease remains poorly understood, but countries that are locked down now could very well face new and even more severe outbreaks down the road. If these countries follow the Swedish path to herd immunity, the total cost of the pandemic will decrease, and it will likely end sooner.

Sweden’s approach to COVID-19 reflects the country’s distinctive culture, and aspects of it may not be easy to replicate elsewhere. In particular, reliance on official recommendations and individual responsibility may not travel well beyond Scandinavia. Sweden is a special country characterized by high levels of trust—not just between people but between people and government institutions.

Swedes were primed to take voluntary recommendations seriously in a way that citizens of other nations may not be. Swedes are also generally healthier than citizens of many other countries, so additional precautions may be necessary to protect the infirm in other parts of the world.

Countries lifting restrictions should also learn from Sweden’s missteps when it comes to the elderly and immigrants: masks and other protective equipment should be made immediately available in nursing homes, and greater emphasis should be placed on protecting service-sector workers who are at higher risk because of age or infirmity.

But the emphasis must be on helping at-risk people stay safe and out of harm’s way, not locking entire societies down. As scientists learn more about the virus and authorities develop new and better ways to work around the contagion— altering the parameters for calculating herd immunity to account for behavioural changes, for instance—the justification for general lockdowns grows weaker and weaker.

Even in places like the United States and the United Kingdom, where the pool of at-risk people is much larger, the cost of protecting these people is much lower than forcing everyone to stay home. Managing the path to herd immunity means, above all, protecting the vulnerable. Sweden learned that the hard way, but the situation there is now under control.

As the pain of national lockdowns grows intolerable and countries realize that managing—rather than defeating— the pandemic is the only realistic option, more and more of them will begin to open up.

Smart social distancing to keep health-care systems from being overwhelmed, improved therapies for the afflicted, and better protections for at-risk groups can help reduce the human toll.

But at the end of the day, increased—and ultimately, herd—immunity may be the only viable defense against the disease, so long as vulnerable groups are protected along the way. Whatever marks Sweden deserves for managing the pandemic, other nations are beginning to see that it is ahead of the curve.