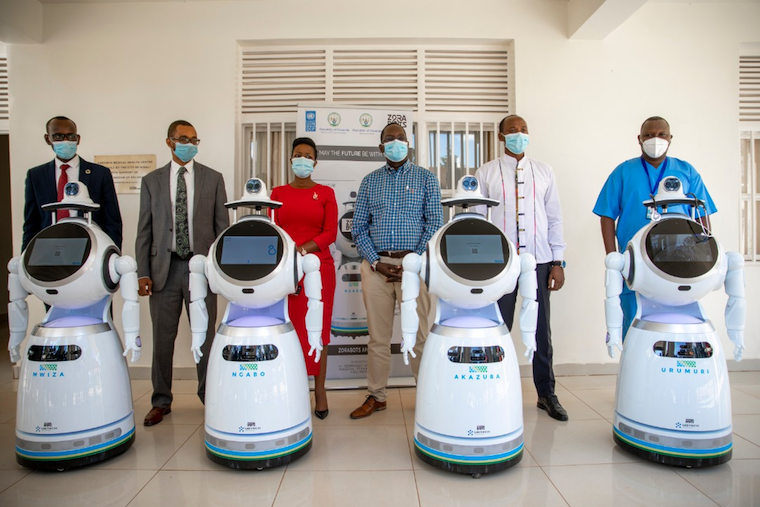 Rwanda is set to deploy 5 high-tech robots to be used in the fight against the spread of coronavirus disease.

The robots, which have been given Rwandan names, were donated by the United Nations Development Programme (UNDP). Rwanda Health minister Dr Daniel Ngamije said the robots will fasten the service delivery while also protecting health workers against coronavirus exposure.

”These high-tech robots have the capacity to screen 50 to 150 people per minute, deliver food and medication to patient rooms, capture data and notify officers on duty about detected abnormalities,” he said.

Meanwhile, Rwanda recorded 11 new cases from the 1,217 samples tested on Tuesday to take its total to 308. Six more recoveries were registered to increase the number of recovered patients to 209.

Kenya's Health ministry said a total of 214 samples tested positive at the Kenya-Tanzania border on Tuesday. But of these, 182 were foreigners who were denied entry into Kenya. Of Kenya's 50 fatalities so far, 76 per cent are men and 24 per cent women and the most affected age group being the 60 year-olds and above.

Uganda's coronavirus cases still stand at 260, with recoveries still at 63 but this excludes results tested on Tuesday. Ministry of Health announced that the results from Tuesday's samples will be released later today Wednesday.

Tanzania's cases still stand at 509 with 21 deaths and 183 recoveries. South Sudan's cases stand at 290 with 4 recoveries. In Burundi, there are 42 confirmed cases, 20 recoveries and one registered death.

Globally, coronavirus cases are nearing 5 million. As of May 20, there were 4,964,092 confirmed cases with 323,493 deaths and 1,948,407 recoveries. Coronavirus cases are spiking from India to South Africa and Mexico in a clear indication the pandemic is far from over, while Russia and Brazil now sit behind only the United States in the number of reported infections.