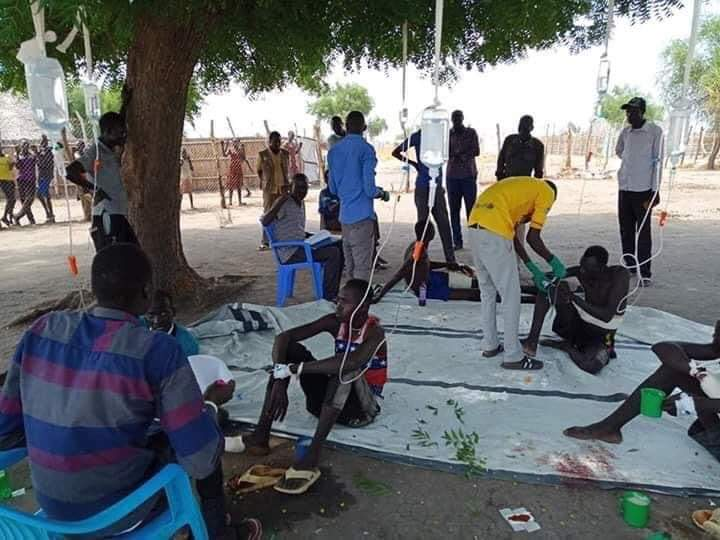 Some of the victims receiving treatment. Photo: Juba Daily News

More than 200 people were killed and at least 300 others wounded in inter-communal clashes last weekend in South Sudan’s Jonglei state, according to local leaders.

Local officials say armed youth suspected of being from the Greater Pibor Administrative Area carried out attacks in four villages on Saturday and Sunday.

“In these two locations, the Murle armed youth pillaged and burned villages in Uror, but the attackers were repulsed with serious loss inflicted on them in both locations,” Mai told VOA’s South Sudan in Focus.

Mai said he travelled to Pieri from Uror town shortly after the attack occurred and saw the bodies. He called it one of deadliest attacks in recent years.

“It was a surprise attack, but prior to the launch of the attack in the two locations we received information that Murle youth were mobilized in large numbers and moved out from their area before the actual attacks took place, so we were very aware,” Mai told VOA.

Kor Biel Rom, chairperson of the Uror Youth Association, said he took part in the fighting but only to defend his community against the attackers.

“We ran to defend our people. We fought for three hours and then they defeated us. Next we repulsed them back. I took arms to defend the people because they came in two ways. Some of them went to the side of Uror, they attacked the area of Pamai, Panyok, and Oluwek [where] they killed people and took cattle,” Rom told South Sudan in Focus.

Rom said he helped collect the bodies. He said the death toll may reach 300. Mai believes the motive of the attacks was to raid cattle and abduct women and children. Several attempts to contact Peter Lebelek, the former secretary general of the defunct Boma state, and John Kaka, former information minister of Boma state were unsuccessful, due to the poor phone network in the area.

South Sudan’s political boundaries changed recently when President Salva Kiir abandoned a redrawn map with 32 states and agreed to go back to the country’s original 10 states.

Ajak Ligo, coordinator for the Greater Pibor Administrative Area in Juba, said on Monday he had not received any details of what occurred in Pibor because the area has been cut off from communication but indicated he heard about the attacks.

“If the rumours happened as a truth, that the youth of Murle have gone to attack the Lou Nuer area, my message to them, both sides, the fighting cannot help each other,” Ligo told South Sudan in Focus.

Ligo called on leaders of both communities to convene a meeting to talk about what happened and discuss what can be done to avoid future revenge attacks in the area.

Killing hundreds for cows, women, and children? Bizarre.
Report to administrator
0 #2 Amooti Mugi 2020-05-20 02:37
These idiots can't understand they are enemies of themselves,more than China flu is..

That is how precarious it is to be an African in Africa!!
Report to administrator