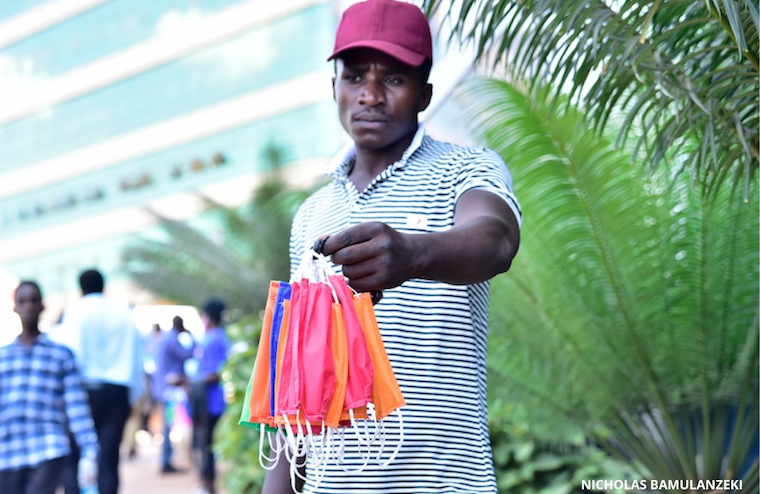 A vendor selling masks on the streets in Kampala

The government is going to provide free reusable masks to all Ugandans aged six years and above as a pre-condition for lifting COVID-19 restrictions.

“The masks must be worn all the time you’re in public…This is the new point of emphasis,” Museveni said, and added that since many people, were expressing concern that they can’t afford to buy these masks, the government has decided to provide these masks to all Ugandans of six years and above.

They will be distributed through the Local government system; from the district, down to the villages. Each Ugandan is entitled to one mask, he said. Local Council chairpersons last week started registering Ugandans, taking their name, tribe and national ID or passport number.

The president relaxed on the restrictions on some businesses. For example, he allowed shops selling general merchandise provided they are not in malls, food markets or arcades to resume operations.

He emphasized that in the immediate future, those selling non-food items will not be allowed for as long as the virus still poses a threat and before a vaccine is got. Museveni also allowed vendors who have been sleeping in markets to commute daily to the market.

Further, Museveni said public transport will be allowed to resume provided buses, taxis, and buses carry half their normal capacity to avoid overcrowding. But these will have to wait for two weeks until June 2, when the distribution of masks across the country has been effected.

For border districts with Kenya, Rwanda South Sudan and Tanzania, however, the restriction on public transport will continue for another 21 days. Taxi brokers and touts should start thinking of other jobs as the president said moving forward, he doesn’t want to ‘hear the noisemakers' anymore.

Bodaboda and tuk-tuk riders also have to wait for another 21 days before they can carry passengers because according to Museveni, it’s hard to space between the rider and the passenger. Private cars are also free to move with a maximum of three people the driver inclusive, provided that they too have face masks.

The president also allowed for the reopening of schools for candidate classes in P7, S.4, S6 and finalists in tertiary institutions and universities. He said however, there will not be end of term one exams.

“The rest of the learners should be patient. it’s better to be alive,” Museveni said.

Hotels and restaurants can also reopen as long as they practice social distancing and don’t have air conditioning running. For bars, night clubs, gyms, swimming pools, saunas, arcades, shopping malls among others, will not be allowed to reopen since it’s hard to enforce social distancing rules.

The air, land and water borders will remain closed so that no new additional cases are imported, according to the president. The 7 pm to 6:30 am curfew was also left intact for another 21 days as well as other restrictions outside those that he explicitly mentioned.

0 #1 Joe 2020-05-19 08:28
Mr. President, this is the time to reduce the tax on fuel (as a temporary measure)to enable the taxis to carry less passengers at the usual rates, otherwise the taxis will hike the prices to make up for carrying fewer passengers.

Mr. President very many people cannot afford three thousand shillings every day (the typical cost of return trip in the city), remember people have been out of work during the shutdown.
Report to administrator
0 #2 Webz 2020-05-19 10:29
So it is a simple extension of restrictions for another 2 weeks.

At this rate of the virus importation by the truck drivers, I fear the restrictions will be extended indefinitely at the expiration of the 2 weeks.
Report to administrator
0 #3 Apollo 2020-05-19 12:41
The mask extension is just a red herring (decoy) disguising a huge political fallout taking place in the corridors of power.

The unbalanced distribution of the spoils and the political clashes emerging as a result, may trigger unintended consequences.

A share-out of over a trillion shillings is the easy part, maintaining a convincing narrative and associated actions is the harder sale.

Over the next two weeks, the public will be overwhelmed by the leakage of information arising out of fractured alliances. It is even possible that some high and mighty may fall in traps in readiness for Nakalema’s troops to swoop in and achieve the necessary diversion.
Report to administrator
0 #4 Lysol 2020-05-19 17:57
We wanna know if Museveni has been tested for the COVID-19.

One thing I am glad about is a Ugandan factory earning that money !! That is BUBU.
Report to administrator