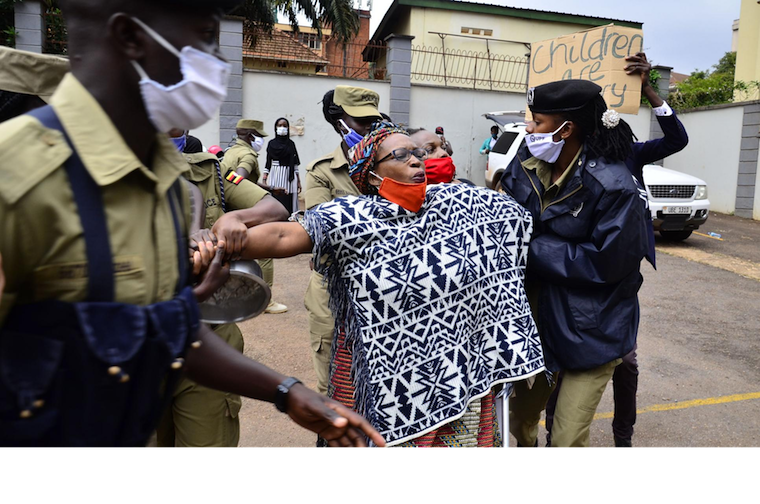 Former Makerere University researcher and activist Dr Stella Nyanzi has been arrested alongside four other people for protesting against what they described as a slow distribution of relief food and human rights abuses.

The protestors held placards reading, "Children are hungry”, "Stop the lockdown oba tuffa tuffe [if we die, we die], We want food."

Nyanzi was carrying a petition to the prime minister, Dr Ruhakana Rugunda, protesting against what she called the continued human rights abuses by security agencies enforcing the presidential COVID-19 directives and failure by the government to distribute food to several vulnerable people.

"Hunger and anger have spiked countrywide causing frightening levels of domestic violence and suicide, whereby women are the major victims. As women, we demand to return to work,” reads the petition in part. 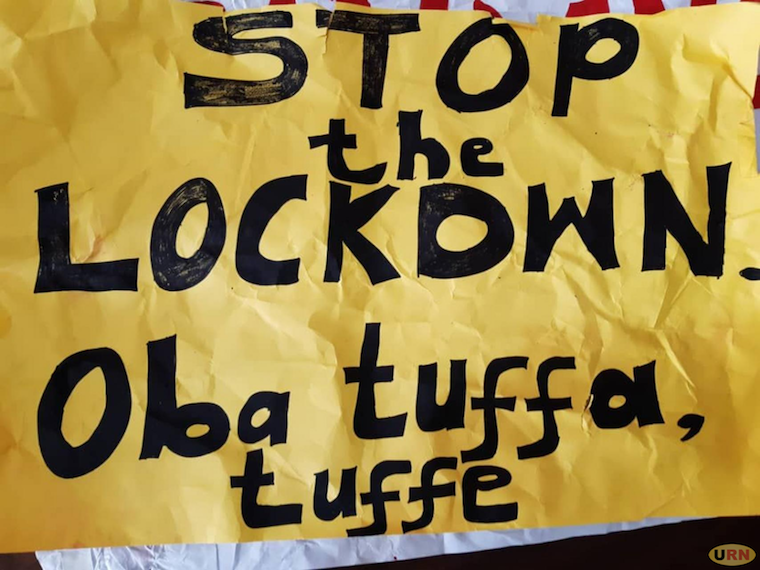 They demanded that the government distribute relief food to all Ugandans, lift the lockdown and adjust curfew time from 7 pm to 9 pm, repatriate Ugandans stuck abroad and release suspects arrested for violating the COVID-19 directives.

Security forces particularly the Local Defence Unit (LDU) personnel have come under criticism for brutality especially while enforcing the curfew in different parts of the country. Last week, Bajjo petitioned the High court civil division seeking an order compelling government to distribute food to all citizens in the country.

Nyanzi’s lawyer Isaac Ssemakadde says that there's no legitimate basis for the arrest of the protestors. He says that government should respect the right to protest during a pandemic.

Nyanzi was in February released from prison after the High court quashed an 18-month sentence previously handed to her on allegations of insulting the president.

Last year, she has been found guilty of cyber harassment of Museveni after she wrote a poem about the president’s mother. High court justice Henry Peter Adonyo ruled that the lower court had denied Nyanzi the right to identify, prepare and call defence witnesses.

Uganda went into a phased lockdown in March with the government instituting a number of measures to stem the spread of coronavirus disease, also known as COVID-19.

From March 20 when Uganda registered its first case of COVID-19, the number of people who have tested positive to the virus has since risen to 248. Sixty-three of these have since recovered from the virus which has claimed the lives of more than 315,000 people globally.

President Yoweri Museveni is expected to address the country today evening as the second extension to the lockdown comes to an end.

As we speak , the regime has not done anything. They even do not know how many Ugandans need to return home.
What we now know is : Sam Kuteesa and Co , have selected a few of their relatives and allowed them to fly back home , on our tax money.

Instead of adressing these types of anomalies , they are arresting Nnyazi , as if she is scared of going to jail like GeneralTumukunde.

Nyanzi is simply saying what everybody else is thinking : WHATS THE DAMN PLAIN ????
Report to administrator
+1 #2 sula 2020-05-18 17:17
Aluta continua. Message delivered. As expected a paranoid ,callous government, violently arrested her.

One day even the tormentors will be tormented
Report to administrator
0 #3 Akot 2020-05-18 17:49
It's time tibal leaders stand down or forced to, so that Ugandans UNITE, come out to block & show Museveni way out!

This is the only way Ugandans will get chanc to a future, through the kind of governance they will put in place after their UNITY throw Museveni out!

Until Ugandans become ONE people fighting a common destiny, Museveni will control & use army/police that belong to him, to silence Ugandans in all circumstances!

Either Dr Nyanzi or mp Bobi Wine become National Leader for second Independence or Museveni will suppress those who challenge or question his authority on how he decides to act in the country that belongs to him & not to Ugandans!

Ugandans MUST UNITE & take back their country or army, police, parliament...will continue to serve Museveni!

Are those harassing, arresting, imprisoning, blocking Dr Nyanzi/mp Bobi Wine...rwandese?
Report to administrator
0 #4 Lysol 2020-05-18 18:43
The corrupt control freak regime of Museveni is now using the COVID-19 pandemic as an exuse to control Ugandans.

The food is only distributed to the regime's supporters and those up country have been ignored.

Nudugu, mind-the Gap is a smiling phoney of the regime, meant to fool the gullibles.
Report to administrator
+2 #5 Nalongo Mutiima 2020-05-19 08:59
Stella Nyanzi is among the very few Ugandans with balls ready to sacrifice her life to confront the dictatorship.

Stella Nyanzi is among the very few Ugandans with balls ready to sacrifice her life to confront the dictatorship.

Where are the men?

Bobi & Zaake have real balls, which if used simultaneously on hers, could yield the usual expected result.

Bye the way, if it must be a Ganda Lady to replace M7, can't we get a better one than that highly schooled but thoroughly uneducated one?
Report to administrator