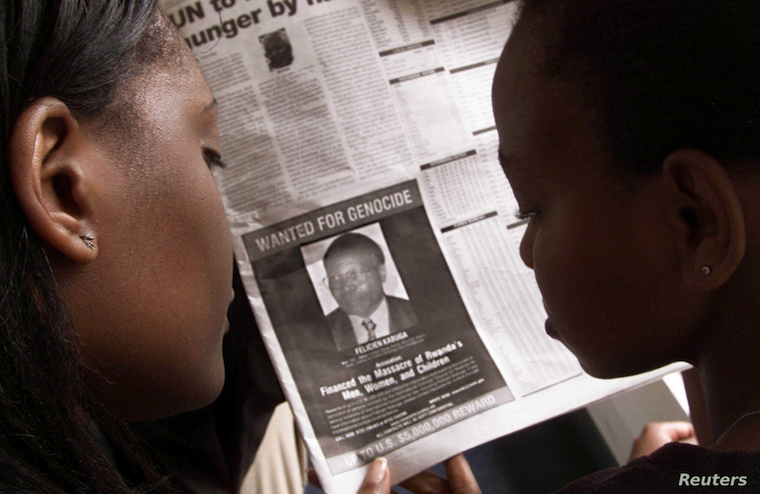 French police have arrested a man accused of funding militias that massacred hundreds of thousands of people in Rwanda 1994 genocide.

The French Justice ministry said police arrested Felicien Kabuga near Paris Saturday after 26 years on the run. The 84-year-old was Rwanda’s most wanted man and one of the last primary suspects in the 1994 slaughter of some 800,000 ethnic Tutsis and moderate Hutus by Hutu extremists.

Kabuga, once one of Rwanda’s wealthiest men, was indicted in 1997 on a charge of genocide and six other criminal counts, according to an international tribunal established by the United Nations.

Authorities said Kabuga was living under a false identity in Asnieres-Sur-Seine, north of Paris, with the aid of his children. Kabuga, a Hutu businessman who had a $5 million U.S. bounty on his head, allegedly funded the purchases of large quantities of machetes and agricultural tools that were used as weapons during the genocide, a U.N. news website said.

The Justice ministry said Kabuga will appear before the Paris appeal court before being brought in front of the international court in The Hague.

U.N. Secretary-General Antonio Guterres said, “Mr. Kabuga’s apprehension sends a powerful message that those who are alleged to have committed such crimes cannot evade justice and will eventually be held accountable, even more than a quarter of a century later.”

However, i think Kagame is simply using that excuse to torment his aggressors or those he perceives as his enemies
Report to administrator
-2 #2 Joe 2020-05-16 23:18
Yes, you may have quarrels with individuals, but going for extermination of a people!

If that man felt strongly about his beliefs, he should have been man enough and own up and say; I did what I did and believed in it and stop hiding for so many years!

Poor his children, they should have advised him to stop running, proudly own-up and end up like a man of his conviction.

May the people who believed in him, helped him in any way come out and grieve for him, it's horrible to come to the end of the road like that!

Cheers Kabuga wherever you are, you had a joy of your life watching the most cruel killings in human history, may your offsprings stand tall because of your deeds.
Report to administrator
-1 #3 Joe 2020-05-16 23:25
I forgot, you will "die" of COVID-19 before you have a chance to testify, but come judgement day, you will be tormented eternally.
Report to administrator
+2 #4 Wooden K. 2020-05-17 16:37
When will this Rwanda genocide story end ?

I am thinking of a conflict between an egg and a chicken. I doubt if King Solomon , the great judge would chose a winner .

I feel that one day , the ones who are hunting down andarresting those who "funded " the genociders will be also be hunted down and charged for shooting down Habyarimana``s plane , which actually sparked-off all the madness.

I know for a fact that CIA , Mossard ,MI16 DDSE ( and others) know who bought the 2 SMS s that brought down the plane.
Report to administrator
0 #5 Kalibbala 2020-05-18 14:33
All this Genocide was masterminded in Uganda by the Son Kagutu..to get Rid Of Kagame, Rwigyema. Baingana, Bunyenyezi and Others...All These are Ugandan Rwandese who enjoyed Killing Us in Millions in Luwero..to Continue in their Motherland to access Land..Remember All the land Obtained in the Cattle Corridor of Lukoola left 2.500.000..DEAD Ugandans Today belonging to a Somali Origin Salim Saleh Rufu (DEATH)...They are Planning the Same to Happen in Uganda Again !

Interahamwe are in Uganda Police Uniform with Orders to Shoot to Kill ..NO MORE COURTS OF LAW..IT IS NOW NRA JUSTICE..NO CASE TO ANSWER..
Report to administrator