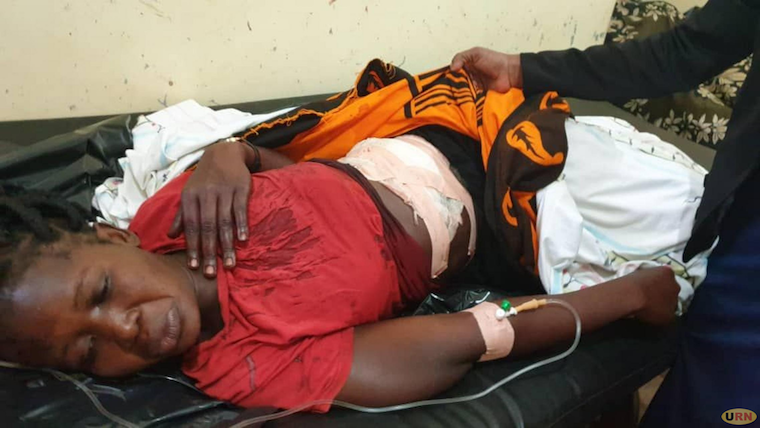 Eva Namulondo in the hospital before her death

A female food vendor from Jinja Central market who was allegedly shot by a police officer on patrol vehicle for defying an all-night curfew has succumbed to gunshot wounds.

Evelyn Namulondo breathed her last this morning at Jinja regional referral hospital where she was admitted in the emergence ward on Wednesday morning. A doctor at Jinja hospital said on condition of anonymity that Namulondo died because of multiple organ failure.

“We did our best and cleaned her intestines but discovered that the bullet was stuck in the liver, leaving it shattered which endangered other essential body organs,” he said.

The deceased’s sister, Agatha Musekwa, says her sister didn’t get the required medical attention after being shot. Namulondo was heading to Amber Court market from her home in Budhumbuli Ward at around 5 am to purchase fruits on Wednesday morning when she was shot in the abdomen. A night curfew imposed by President Yoweri Museveni to curb the spread of coronavirus runs from 7 pm to 6.30 am.
Earlier, from her hospital bed, Namulondo said that she was travelling with another passenger on a motorcycle when police intercepted them along Kyabazinga Way, but the motorist declined to stop, prompting the officers to open fire.

“We begged the bodaboda man to stop but he refused, which I think angered the policemen to shoot at us. I fell after sustaining injuries. The motorist sped off with the other passenger and all I recall is that the police officers dumped me here [hospital],” she said.

Kiira Region police spokesperson, Abby Ngako, says detectives are yet to ascertain the deceased’s true shooters as their preliminary investigations have confirmed that, none of their own was responsible for the shooting.

He, however, declined to divulge further details, saying they are liaising with other sister agencies to find the deceased’s killers. The deceased will be laid to rest in Kasaitaka village in Bugiri district.

This Covid paranoia is a Disguise to Fulfill another Murderous Agenda...They Own ALL Entities in Our Country!!! Today they are Sorting us OUT!!Raise Up and End The MADNESS..
Report to administrator
0 #12 WADADA rogers 2020-05-16 22:55
Thank you killers, at this rate, nobody is safe under you, i hear you duty is to keep law and order as well as keeping Ugandans safe and their properties
Report to administrator
0 #13 DW Duke 2020-05-17 01:20
What I have been able to learn in communicating with some locals is that she said it was the police.

I believe the others on the bike did as well. The police are denying it. I also heard that local officials are stealing money that was given to them to buy COVID 19 rations for the people. They call it the Devil's loot.
Report to administrator
0 #14 Kabayekka 2020-05-17 16:52
But surely by shooting this lady dead it will not stop the disease to spread from the truck drivers!
Report to administrator
12