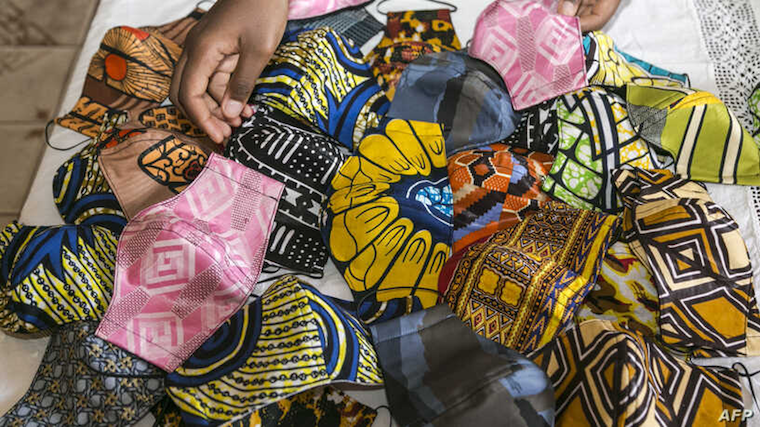 Home made masks being sold on the streets

Police in Cameroon have detained several hundred people for not wearing face masks in public, as COVID-19 cases in the central African state continue to rise.

Seventeen-year-old David Ngwa Fru said a team of police and gendarmes detained him and his two younger sisters in the capital, Yaounde, on Thursday morning.

"The police removed us from a taxi on our way to the market because we were not wearing our masks. They detained us at the police station for three hours. We paid 2,000 (each) before we were released. Many people who did not pay the money are still there."

Fru, speaking to VOA through a messaging app, said that although they were not issued any receipts, the police told them that the $9 (about Shs 34,000) he and his siblings paid were fines for not wearing their masks, and assured them that the money would be sent to the state treasury.

Police official Oswald Ateba said officers are implementing a Cameroon government order that everyone in public must wear a face mask as of 6 a.m. Thursday.

He said they have been instructed to arrest everyone found along the streets, markets, bars and popular spots without masks and to impound all vehicles and motorcycles that are seen with drivers and passengers not wearing masks.

The police said authorities have detained hundreds of people, seized 250 motorcycles and impounded hundreds of taxis in Yaounde alone as part of efforts to implement the new rules.

Government spokesperson Rene Emmanuel Sadi said the decision to make arrests came after lockdown restrictions were eased, but a majority of Cameroonians were not wearing masks.

He said the government is also battling the growing stigmatization of people testing positive for COVID-19 and those who have recovered from the disease, stressing that COVID-19 is neither shameful nor a curse and any person can be contaminated.

Cameroon has about 3,000 reported cases of COVID-19 and has recorded 139 deaths. Even though the government has eased the strict lockdown measures, Prime Minister Joseph Dion Ngute said on Wednesday no one should think that COVID-19 has been conquered in the central African state.