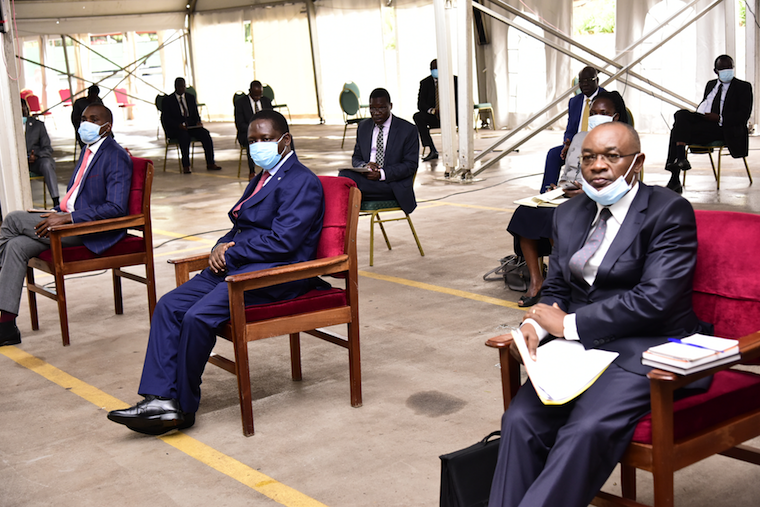 MPs who have not yet spent the Shs 20 million given to them as facilitation for their COVID-19 activities have been given an ultimatum to return the money by May 27.

Those who have not yet used the money as yet have been asked to take the money to the district task force through the chief administrative officer (CAO), while those MPs representing special interest groups should pay the money to the national COVID-19 task-force. All legislators are expected to submit accountability for the money not later than May 27.

The decision came after a letter by President Yoweri Museveni indicating that parliament undermined the executive by diverting Shs 10 billion from the supplementary budget which was initially looking at key sectors in the COVID-19 prevention. The clerk's order is a twist in events after the speaker of parliament Rebecca Kadaga told the MPs to spend the money on anti-coronavirus activities within their constituents including fueling ambulances, purchasing relief food among others.

The president called for a thorough audit of the process, except for those who have handed the money to the district task force or returned it.

The parliament found its self in a nationwide criticism as several Ugandans questioned their role in the ongoing COVID-19 fight, and why they needed the allocation of Shs 10 billion.

Museveni directed the auditor general and the ministry of Health to audit the controversial funds and adherence to coronavirus preventive measures such as social distancing, mass gatherings for the MPs who spent the money on relief aid items in their constituencies.

With covid-19, EU States hit hard & in lockdown for +2 months are giving billions of euros to help private/public companies, those who lost jobs, those without jobs, health workers given bonus for working 24 hours a day...but Uganda mps got money & for what?

Ugandans have proved beyond doubt they are TRIBALISTS, tribalistically divided & ruled by migrant Museveni!

But why continue pretending it's a democracy with a people well served, by keeping alive parliament with mps that servi no purpose to electorate?

Going along with the tribalistic system to ensure tribal allegience is 1 thing, but why vote in mps who are of no use to development of constituencies?

No tribe wants to be FREE to manage its land riches, serve its people, right?

Each time we see Uganda mps displayed is when they debate Museveni's age, their salaries/allowances,but non bring to parliament issues of constituency development plans!

Has Ug.parliament ever debated how to upgrade & finance schools, subsidize & modernize agriculture that is the base of living in the country?

Why is it mps getting money & not health workers who gave everything to ensure Uganda hasn't had so many deaths with covid-19?

Why is Uganda the worst shithole, a laughing stock, in today world?
Report to administrator
0 #3 Nalongo Mutiima 2020-05-14 16:59
This parliament is a curse. The other day MPs passed a motion of displeasure against Museveni for undermining MPs over Covid-19 theft.

Fast-forward after a couple of days, hired loons, curiously from the east and north, were stage-managed to counter the earlier motion by praising Museveni as the father of the nation - all intended to scuttle the Ssemujju motion from the Hansard.

The main characters, the Magyezis, were conspicuously absent for this was not their cue.

This choreographed performance was executed in its usual comic absurdity.Our parliament is a laughingstock.
Report to administrator
+2 #4 Webz 2020-05-14 18:51
"Are MPs the Purchasing Officers of the State of Uganda? The Accounting Officers of the country are well known,The MPs are certainly not among them.What procurement rules did these individual MPs follow?"

This excerpt is qouted from the letter the president penned to the Rt. Hon. Speaker, M/s Kadaga, on a follow-up of MPs refunding the stolen money to the concerned authorities.

So I thank the H.E. Y.K. Museveni for being a man of his word on this matter. Thank you our president and make sure the thieving MPs refund the bounty loot accordingly.
Report to administrator
0 #5 Juwait kali 2020-05-14 19:55
Who have not spent the money yet, when they were warned not to take the money well in advance???

Sorry I forgot that these lies are to fool people who will involve them selves in upcoming fake selections.
Report to administrator
+1 #6 Nalongo Mutiima 2020-05-15 09:46
Quoting Webz:

This excerpt is qouted from the letter the president penned to the Rt. Hon. Speaker, M/s Kadaga, on a follow-up of MPs refunding the stolen money to the concerned authorities.

So I thank the H.E. Y.K. Museveni for being a man of his word on this matter. Thank you our president and make sure the thieving MPs refund the bounty loot accordingly.

Who will account for it? Leave alone billions in donations from here and abroad. You seem to lose sight of the bigger picture in your excitement.
Report to administrator