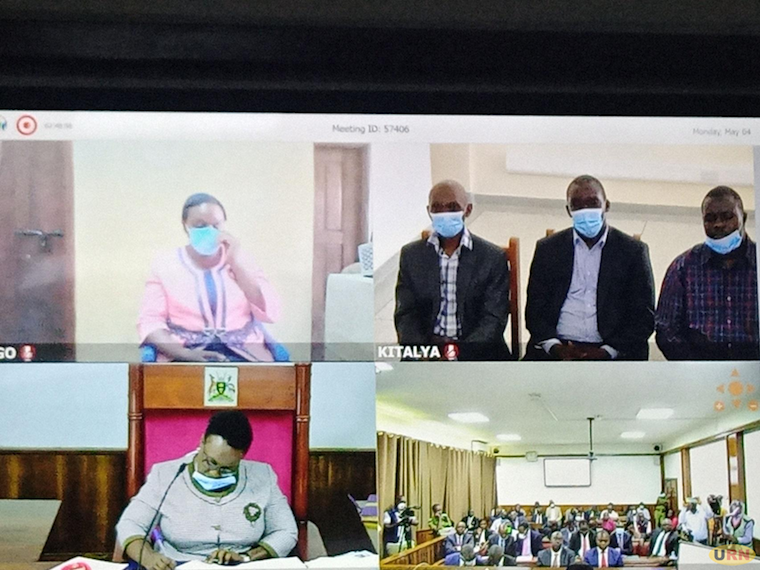 The accused appear in court via video link

Office of Prime Minister (OPM) officials arrested over alleged fraudulent practices in the purchase of Covid-19 food relief are out on bail.
The four suspects; permanent secretary, Christine Guwatudde Kintu, undersecretary Joel Wanjala, assistant commissioner for procurement, Fred Lutimba and commissioner for disaster management, Martin Owor were granted bail by the Buganda grade one magistrate, Doreen Karungi on Monday.
They appeared before court via video conference from Kigo and Kitalya minimax prisons following a bail application by their lawyers, saying the offences for which they are charged are bailable.

Guwatudde through her lawyer, Mcdusman Kabega told court that she is gravely ill as per the medical report authored by Alex Kakoraki, the acting medical superintendent Uganda Prisons. Kakoraki explained that Kabega suffers from peptic ulcers and other stomach disorders.

"The said conditions coupled with chronic hypertension, may not allow my client to stand prison conditions. And therefore since she has no criminal record, with a known location we pray that she is granted bail," said Kabega.
However, the prosecution led by assistant director of public prosecutions, Josephine Namatovu opposed the bail application, saying there is a likelihood that the suspects may interfere with prosecution witnesses once they are released since most of them are their subordinates.

On commissioner Owor, prosecution told court that the suspect was found in illegal possession of government properties, which may require further investigations. However, the defense lawyers tasked the state to prove to court how the suspects would interfere with investigations in vain.

The lawyers also challenged the documents submitted by the state including affidavits from investigating officers on grounds that they wrongly filed and smuggled into court. They also lacked stamps and case numbers.

"The sureties presented have not been objected by the state...and the allegations of possible interference with witnesses remain a speculation since it has not been proven. Therefore, I hereby grant bail to the applicants but they must bring their passports to court upon being released from prison," said magistrate Karungi.

Preliminary investigations by the State House Anti-corruption Unit and other agencies indicate that between March 31 and April 8 while at the Office of the Prime Minister in Kampala, the accused persons colluded to commit a fraudulent practice during the procurement of 9,030,000 kilograms of maize flour and 635,000 kilograms of beans.

The suppliers included Afro Kai Uganda Ltd, Global Trust Ltd, Mandela Millers and Aponye Uganda Ltd. It is alleged that government lost over Shs 4 billion in inflated prices after the officials quoted a price of 3,900 kilograms of maize flour as opposed to the open market price ranging between Shillings 2,500 and 3,000.