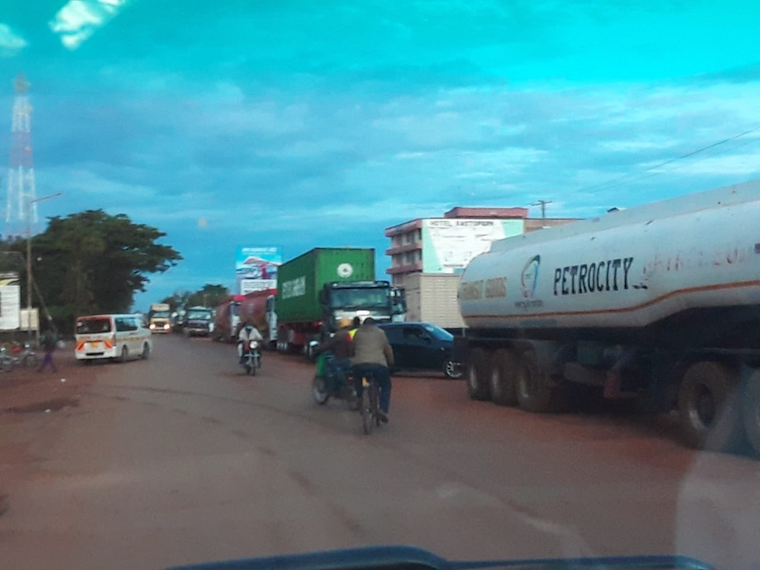 Uganda’s coronavirus cases have risen to 74 confirmed cases after 11 more truck drivers tested positive for the virus on Thursday.

Of the 11 confirmed cases, 6 are Tanzanian truck drivers who arrived from Tanzania via Mutukula border post while 5 were from Kenya (3 entered from Malaba while 2 entered from Busia border post).

The spike in Uganda’s cases matches the spike witnessed across African countries on Thursday where an unprecedented high number of new cases were recorded on the continent. South Africa registered 318 new cases, Egypt 232, Cameroon 171, Guinea 101, Morocco 91, Somalia 42, Senegal 37, Sudan 22, DR Congo 18, Kenya 17, Mali 16, and Cape Verde 9. However, there was no significant rise in the number of deaths across the continent.

All Uganda's latest 19 of the 20 cases have been registered from truck drivers coming from either Kenya or Tanzania. The issue of truck drivers importing coronavirus into the country puts Uganda in a classic catch-22 situation; focus on the health or focus on the economy.

Whereas Uganda has relatively managed to contain the spread of the virus, long-distance drivers from the neighbouring East African countries are now posing a new challenge.

Speaking at the Uganda Media Centre, Gen Jeje Odongo, Internal Affairs minister, said the government is considering a number of options to ensure those truck drivers who come into Uganda don’t transmit the virus into the community.

“While we are sacrificing to keep the spread of COVID-19 minimal, our efforts are undermined by imported cases. Government has noted these concerns and the national task force is now studying possible remedial actions,” Odongo said.

Uganda started testing truck drivers about two weeks ago and these, UN officials, air cargo crew and emergency service providers are the only people exempted to enter Uganda after the closure of all land, water and air entry points.

While addressing the country last week, President Museveni said truck drivers who have been tested for coronavirus should be left to proceed with their journeys and only traced if they have test positive.

Odongo said, with truck drivers fast becoming the coronavirus importers, government has to rethink what new actions they should take. He pointed out the deployment of rapid testing kits so that results are obtained before the driver leaves the border. However, he was quick to add that this might be an impossible option because of the cost implications. Each test kit is said to cost $65 according to minister of Health Jane Ruth Aceng.

The other option government is considering, Odongo said, is to adopt a system of relay driving where a driver from a neighbouring country like Kenya brings the vehicle up to the border like Busia or Malaba. Here, the vehicle is sanitized then handed over to a Ugandan driver who will take it to its final destination if it is in Uganda.

However, if the vehicle is just transiting through Uganda, then the Ugandan driver will similarly handover to the driver of the country to which the cargo is destined.  However for this to work, Odongo added, it must be agreed upon by the East African Community member states.

The minister added that as they await these discussions, the government of Uganda has designated specific areas where these truck drivers will be resting away from their usual places.

Like seriously why are we in lockdown now.... on the 20th day and we are daily receiving Covid-19 imports?
Report to administrator
0 #13 Juwait kali 2020-04-24 20:38
Some of the comments here remind me when trump said corona virus was a Chinese virus not knowing a lot of Americans would fall victim to the same a pandemic.

This is an international tragedy all countries are affected. Stop this nonsense of deport this deport that. Kenya this Tanzania this. Even the media who you would expect to understand.

Should countries start deporting HIV, cancer and other deadly diseases sufferers ? Your low IQ is showing. I argue the Government to start taking action to areas that refuse a recovered readmitance into their communities.
Report to administrator
0 #14 miki 2020-04-24 21:38
Relay the cargo (trailer or container) sections of the trailer tractors.

Unhook trailers or transfer containers from the foreign tractors (Mitwe) to Uganda based tractor trucks (mitwe) so that no persons have to cross borders during the containment period.

This is the most practical and cheap ways. Ugandan haulage companies can be helped to form partnerships with companies in other countries, and the transfer process needs to be made efficient, cheap and as quickly as possible.

This is another opportunity to re-think and re-organize the business of cargo haulage in the region, and it would be a win-win situation for all involved.

The idea of truck rest areas may no longer be practical since it will be aggregating many people in single areas,,will become attraction points for batembeyi, women of the oldest trade.

It would also require big resources towards policing these areas and new points of corruption and red tape. deal with the problem at the borders.
Report to administrator
0 #15 James Obur 2020-04-25 14:54
If even the Pope could take precautions and offer the Easter Mass electronically, is there any Tanzanian who claims to be more religious than the Pope.

Incidentally, where are the preachers, who used to heal people in the churches before the virus? Please swing into action, we need your services more than ever before (i.e. if you have been genuine)
Report to administrator
12