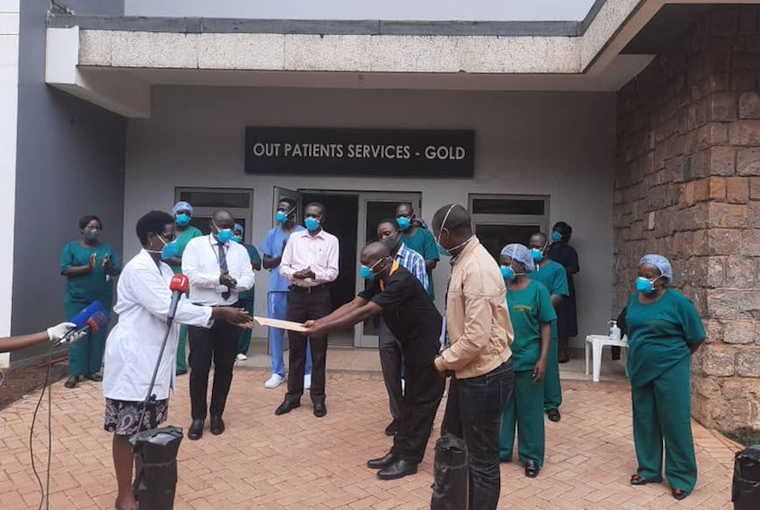 Patients who have recovered from the coronavirus disease (COVID-19) in Uganda have increased to 45 after seven more patients were discharged today.

Mulago hospital discharged 3 patients while 4 patients were discharged from Entebbe General hospital. This means Uganda's active cases stand at 16 with 0 deaths so far.

Doctors have said patients being treated for COVID-19 in Uganda are set to be shifted from having common anti-malarial drug chloroquine among their treatment plan to hydroxychloroquine.

This decision according to Prof Pauline Byakika, a member of the COVID-19 national case management committee is being reached after reviewing available research from clinical trials.

She said, patients who are under treatment at Entebbe hospital, are being given chloroquine even as there’s no drug yet approved specifically for COVID-19 treatment by the National Drug Authority (NDA).

She notes that when they looked at the toxicity profile, they realized that hydroxychloroquine is better even as patients who have used chloroquine have so far been doing well because of the anti-viral properties the drug has.

She adds that no patient admitted at Mulago hospital is being treated using chloroquine yet as cases there have been mild - requiring health workers to mainly focus on keeping patients’ other underlying illnesses or comorbidities in check. Mulago has had 23 patients in admission but 20 have been discharged already.

"Patients in Mulago have been treated mainly with supportive therapy while the ones in Entebbe received some chloroquine. We don’t have any drugs approved yet either by NDA of by FDA [Food and Drug Administration] for management of COVID. At the moment it is all supportive management, however, we have had several studies trying out different drugs from chloroquine, hydroxychloroquine..." Byakika added.

When asked why Ugandans are being given these drugs even as the cases are mild, Byakika said they give the medicines to guard against a likelihood of the disease progressing since patients elsewhere who have tested positive tend to progress quickly. She adds that giving patients these drugs can help deter chances of progression which can be fatal for the health system.

As Uganda is including hydroxychloroquine among the treatment list, elsewhere the hype around the drug being able to treat the acute respiratory illness is dropping after recent studies found it doesn’t offer any help.

For instance, a study done in the US whose results were released yesterday shows 28 per cent of patients treated with drug succumbed to the infection and had higher death rates than those that were not given the medicine. Here, Byakika said the use of the drug is being recommended with strict monitoring of patients by health workers for likely side effects that especially the drug’s on the heart.

Dr Freddy Kitutu, a lecturer in the Pharmacy department at Makerere University said clinicians should be keen not to put medicines that have effects on the respiratory system as these tend to worsen pneumonia which is one of the symptoms for COVID-19.

Apart from the anti-malarial drugs, antibiotics such as azithromycin, panadol, Zinc, Vitamin C and D are also being given to patients under treatment in Uganda.

https://edition.cnn.com/2020/04/21/health/hydroxychloroquine-veterans-study/index.html
Report to administrator
0 #3 Wainanchi 2020-04-23 11:34
Depending who is reporting.There is unfortunately bitter rivalry amongst the players and politics and business play with peoples lives.

Hydrochloroquine in conjunction with zink and Z Pack has been tested as 97% su successful treatment.

Evidence is also here in Uganda of people being successfully treated It is very interesting that some of our commentators are quick to dispute this by qu6 some negative " studies," which are aimed against president Trumps recommendations which the falls into the sphere of pure politics and games to downgrade President Trump and French scientist professor Raoult Didier who discovered this regime of treatment which us saving the planet at this moment and causing resumption of normal life as we know it.
Report to administrator