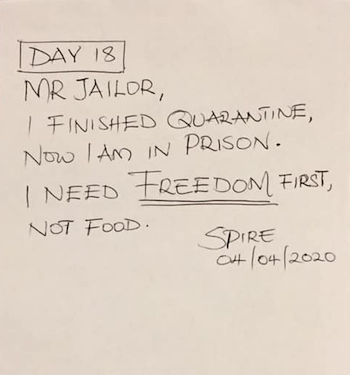 When governments successfully securitise our lives, it becomes legal and normal to abuse them.

This abuse is justified in the language of safety and security. The state declares one’s basic rights such as movement, religion, right to privacy, or expression a threat to collective survival, and are thus suspended. This is how, in his eighth address on COVID-19, President Museveni gaily proclaimed that the country was “in a state of war,” and he was not speaking “convenience” but, rather, “survival.”

Survival then becomes the slogan for government: extra budget allocations are secured without question, and more radical inconveniences are declared in the same language – safety and security.

But because this is not “war” in the basic sense of the term – guns and bombs blazing – but, rather, a new way of ordering the world, this “new world order” is expected to be orderly and disciplined – even in its inversion of the normal. It is here that journalist Gawaya Tegulle’s piece on the legal pathways Museveni should have engaged before issuance of directives is sharply insightful.

Yes, the violence of the state is supposed to be orderly and organised. States are never anarchic in their violence because their violence is legal. But what happens when a state becomes anarchic disorderly, lacking in clarity and method in the exercise of “survival government,” to the point that those it sought to protect are actually injured?

This is not a story about the errant local defence unit (LDUs) wantonly molesting and brutalising Ugandans, nor is it an analysis of the apocalypse of lockdown on hungry stomachs. This is the story of the ministry of Health, and how it has interacted with the life of Dr Spire Ssentongo, and other quarantineers. Perhaps the driving question for me is this: how do subjects respond to the anarchy of the state in moments of crisis?

Arguably one of Uganda’s finest cartoonists and essayists, Ssentongo was quarantined by the state after returning to the country at the time the COVID-19 epidemic started re-ordering our lives. Ssentongo was from a writing residence at Cambridge in the UK, which he had cut short.

Upon reaching Entebbe airport on March 18, Ssentongo was put under the 14-day mandatory quarantine. State quarantine is a terrible inconvenience, but even when the opportunity for escape opened – just a bribe of $50 – Ssentongo selflessly chose to stay for the collective good.

Since the COVID-19 can be spread by carriers before they begin to show signs of infection, the ambition of quarantine is that potential
carriers spend 14 days alone – in mild solitary confinement – to allow signs of the infection to appear without spreading the disease to others.

Almost all states have done this as a form of prevention. If they tested negative on the 14th day, it would be confirmation that they were safe to interact with other persons. Ssentongo’s quarantine was supposed to end April 2. It never ended despite testing negative.

It was rather anarchically extended, driving the rather perennially cheerful academic into hunger strike. The quarantine actually became
tortuous. Being a writer – a columnist with this newspaper – Ssentongo closely updated his readers about the entire affair first as societal
commentary, but later as protest.

Kampala learned a lot about quarantine from his social media page. At Central Inn, Entebbe, all quarantined persons were being charged $100 for accommodation minus meals. But this gazetted quarantine centre continued to operate like a hotel on a normal day.

Ssentongo told us that staff at this inn attended to quarantined persons like they were ordinary guests dangerously exposing themselves (but have never been quarantined). This was in addition to travellers crowd-sleeping at the hotel’s lobby if they could not afford the hotel’s hefty bills.

Then came the story of ministers and other health officials continuously interacting and mingling with returnees without any social-distancing
norms. But they have never been quarantined either. 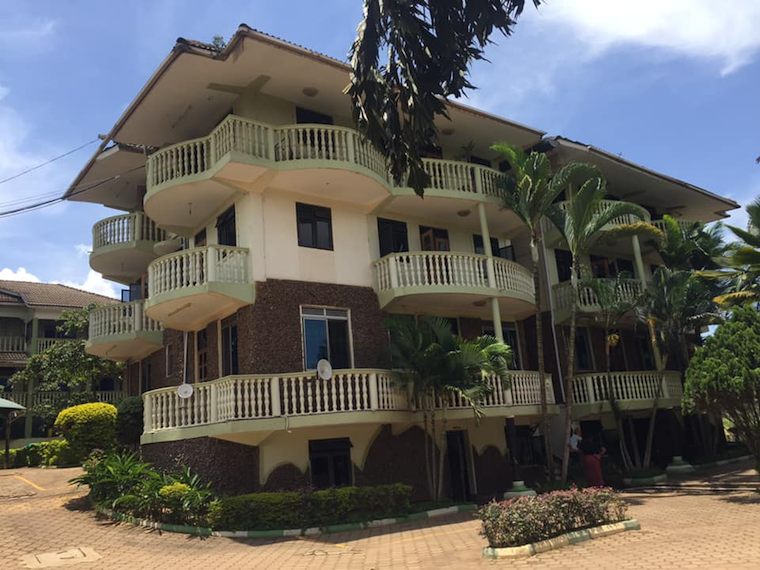 When moved to a newer location, Arch Apartments in Ntinda, Ssentongo narrated that there, a little awareness of the Covid-19 threat was visible, and all of them kept in their rooms under close guard of four full-time security personnel.

But when one of the quarantineers returned positive on day 14, Ssentongo and all others whose tests had returned negative were required to start counting their 14 days afresh. At this point, hell broke loose, the hitherto law-abiding Ugandans and foreign visitors started demanding for answers.

It had ceased being “quarantine,” but rather a “tortuous imprisonment.” Why would Covid-19 negative quarantineers be required to restart quarantine – having had no contact with the positive quarantineer?

It is anarchy when a state fails to govern within a new order it created itself: Quarantines, lockdowns, stay-homes, despite being justifiable new forms of government, are actually inversions of intimately cherished rights and freedoms. But, for them to hold true in the hearts of publics, they need to be coherent and orderly.

See, at a scientific level, publics appreciate any form of government – however abnormal – as long as it is justified and orderly. The absence of order actually disqualifies any justifications. There are other reasons for the extreme levels of violence witnessed on Kampala’s streets.

But one of these reasons is the absence of order and clarity over this new world order. Indeed, for this disorderliness, if the pandemic persisted, we are entering a time where all state’s directives will be ignored requiring more violence and coercion.

In one of his analyses, Ssentongo argued that endlessly extending their quarantine was “scapegoating” failure, and justification for “scandalous budgets” and “eating.” He wrote that “It appears the whole weight of Uganda’s gamble with Covid-19 and quarantining has to be heartlessly loaded onto our shoulders.”

In truth, in moments of crises, states create scapegoats that they unfairly punish so as to be seen as working, but also coerce consent that
the threat is real. This not only allows them arbitrary rule, but also distracts attention from real responses.

Uganda and Ugandands, many,are opportunists greedy and like to cheat and lie to profit.

So tje dr Spiro needs to train and educate Ugandans anyway of his cartoons not the sitting Government.

But noone of you commentators spreading fake news like in case of President Trump opponents is saying nothing.

Only Dr Spiro is telling us what we all know too much. Uganda brace itself to become better to everyone not be selfish and greedy. It is a deadly sin
Report to administrator
+3 #2 Ekelot 2020-04-08 13:05
So sad for persons caught up in this unfortunate situation. It is a catch 22 I must say.

The government needs to balance communal against individual rights. Just wondering what the middle ground would be.

There have been situations where persons in quarantine interacted and came into contact with each other and sadly after 14 days one or two of them test positive, it then becomes hard to be sure that no transmission occurred.

Mistakes have been made. Could people in quarantine be given an opportunity to commit to staying in quarantine in alternative places?

What if actually one or two had gotten infected, what would it mean for their families and the wider community? I sympathize with the situation but may be a "negotiated" settlement would suffice to mitigate risks on both sides.
Report to administrator
+1 #3 Kirya 2020-04-08 17:36
Uganda has not had a functioning government
for 35 years. We have a junta of bushmen who have
used the kindness of the natives to enrich themselves.

Now they are planning to steal the corona virus funds!
Sick and tired of these sick thugs. It is time to export them back to Rwanda.
Report to administrator
0 #4 Kalibbala 2020-04-08 22:15
"This is not a story about the errant local defense unit (LDU s) wantonly molesting and brutalizing Ugandans, nor is it an analysis of the apocalypse of lock down on hungry stomachs."..

@Kirya..Spot On..These are all Mercenaries ..Interahamwe patrolling Neighborhoods Hungry and Deadly...With Orders to Shoot and Kill Already impoverished Ugandans..They Hunted their Animal..But Time is Running Out on Them..
Report to administrator
-2 #5 Wainanchi 2020-04-09 00:08
@ Kyria..Do not spread faky faky news.Sit in your dwelling and shut the [censored] up pig.
Report to administrator
+1 #6 Kabayekka 2020-04-09 09:47
Of course this writer is signing his death warrant already. Exercising your body outdoor has been stopped by all.

You living and locked up in a small hotel room 24 hours for ever, one is sure that you are going to survive with such inhuman treatment.

Most probably, some people have not been happy with the writings this gentleman has made against them!
Report to administrator
-2 #7 Wainanchi 2020-04-09 14:24
I know that a number of frequent anti NRM commentators disagree with me.

Its politics I can understand. But to give me so many negatives when I write about robbers and conemen in Uganda and when we read every day how many of us stole something or liedvor chested someone ,then it is dishonest to reject my views when I am speaking the truth.

They also know it but obviously do not want to see it when Wainsnchi exposes them and the truth. In reality truth hurts and I an understanding that but I am sorry for them since they are obviously bad characters the same I am talking about.Lets agree that we disagree and that I stand for the truth and honesty and they on the other side.
Report to administrator
+2 #8 Intertainmentnews 2020-04-09 18:50
We must commend our government for being firm on those with exposure to the desease. The cartoonist should be reasonable and wait patiently to ascertain that he has no desease and in so doing, he keeps his family and the entire country safe.

Some people are actually in prison in terrible conditions. So please....... be reasonable and understanding since at least you are in a hotel.
Report to administrator
+1 #9 Intertainmentnews 2020-04-09 18:50
We must commend our government for being firm on those with exposure to the desease.

The cartoonist should be reasonable and wait patiently to ascertain that he has no desease and in so doing, he keeps his family and the entire country safe.

Some people are actually in prison in terrible conditions. So please....... be reasonable and understanding since at least you are in a hotel.
Report to administrator