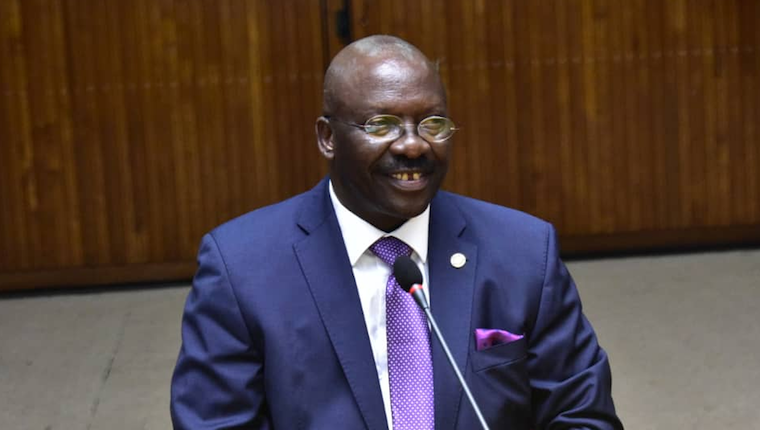 Both Byabashaija and Mwanje appeared before the committee chaired by the speaker of parliament Rebecca Kadaga today for vetting. But sources from the closed-door meeting rejected their appointment on grounds that the two, have already clocked 60, the mandatory retirement age of public servants.

Before he could be entertained by the vetting committee, sources privy to the proceedings indicated that the legislators were debating whether to interface with the officials or just dismiss them.

Moments later, Byabasaija, clad in a navy blue suit and white necktie, was later ushered into the vetting room by the parliament staff. However, he came out after just about ten minutes.

In an interview thereafter, Byabashaija who has served as commissioner general for 15 years said that old age could not stop his service. He said that although he is aged 62, the law does not apply to him in the circumstances because he is serving on a contract basis of three years.  Byabasaija had retired from public service in 2005.

Article 217 of the Constitution that operationalizes the Prisons Act, 2006 is silent about the age of requirement.

1234
0 #31 Wooden K. 2020-04-09 16:26
Its a FACT that Rwakasisi was convicted and sentenced to death . He claimed to be dying of cancer and was pardoned . Regarless of what you think , the idiot is a bloody murderer. His record is that of having headed Obote`s version of the Gestapo .

There is nothing intellectual about that.
Katatta who went to school for only 4 years could have played that role.

Maruru died a respected general . So did 99 % of other generals from other parts of Uganda.

I know that we have a lot of time because of the lockdown , but lets resist turning this into a childish debate.

I am still saying that the presence of Maruru in Amins , Obote11 , Okello`s and Museveni`s armies does not amount to "wersterners dominance" let alone brightness.
Report to administrator
0 #32 Wooden K. 2020-04-09 16:50
Fortunately , I watched theCOSASE proceedings , I also happen to know how banks work.

Your conclusions are made up, your assertations are weak

The Governor of the Central Bank is fully respoonsible for whatever is done by his juniours , including his deputy.

He just can turn himself into a whistle-blower when his Officers start messing up , stealing documents , printiing thier own currency and selling off banks in a matter of hours, at 85 % discount .

Maybe you do not know how a tribalist thinks:

The Tutsi in Rwanda and Burundi did not think it was wrong to claim that they were "brighter" than the Hutus , They then decided that it was natural for them -13% -to dominate the 85 % Hutus that were not bright enough

We all know what that went

Plus , none of his super westerners has a record of having a special legacy . Deep into their evenings , they still depend of the taxes that their grand grand Children pay.
.
Report to administrator
1234