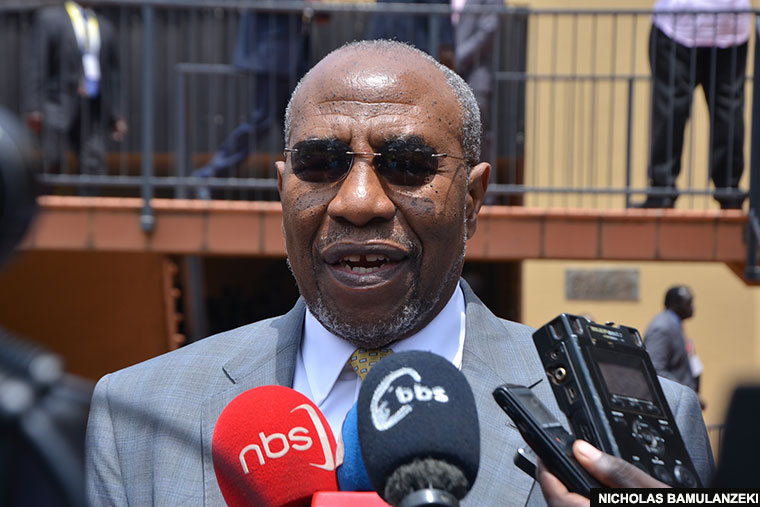 Government has announced that it will start the distribution of food packs to 1.5 million vulnerable people in Kampala and Wakiso districts this Saturday, April 4, 2020.

Government imposed a 14-day lockdown starting April 1 where all non-essential workers were ordered to stay home in a bid to contain the spread of the coronavirus (COVID-19) pandemic.

While updating parliament on the implementation plan for the COVID-19 presidential directives, prime minister Dr Ruhakana Rugunda, said the food distribution will start with Kampala and Wakiso before rolling it out across the country.

“The items will be distributed at Local Council one level with close supervision of the police and army to ensure order and transparency,” Rugunda said.

President Yoweri Museveni said on Monday that the vulnerable people may be supported by government with food items for at least a month until normalcy returns in the country. He warned about proper identification of beneficiaries and that distribution must be done in a health conscious way.

“We are looking at groups who were feeding themselves but living hand to mouth. Once you stop what they are doing because of health issues, where do they get food?” Museveni asked.

He added: “The majority of people in the country feed themselves like the farmers have their gardens and people in the towns have money and bank accounts with savings.”

In his Tuesday address, Museveni banned "idiots" from distributing foods to people, saying they were seeking cheap popularity and yet putting the lives of Ugandans at risk as some distribution attracted crowds. Museveni had earlier banned gatherings of more than 10 people, currently, gatherings are only limited to 5 people.
The president ordered police to arrest anyone who defies the order and charge them with attempted murder. He said anyone who wanted to donate food should hand it over to the taskforce headed by the prime minister. Rugunda said the government would issue food to struggling Ugandans especially those that depended on their jobs for a daily meal and yet cannot work due to presidential guidelines to combat COVID-19.

The president said the Office of the Prime Minister would work out a mechanism for the distribution. Martin Owor, the commissioner of Disaster Preparedness at the Office of the Prime Minister says they have used national statistics from UBOS to identify the most vulnerable places with the urban poor. The areas listed include; Kireka, Nansana, Katanga and others. He says they will also use the LC chairpersons to identify further the neediest people.

Owor says they chose to start with Kampala and Wakiso because the urban poor here come from far areas and yet survive on daily earnings. He says they hope the situation will have normalised after 14 days otherwise, they will have to think of how to extend food to more groups in need.
He says the distribution will be done at LC 1 level by the LC chairpersons. Rugunda says the local chairpersons will be supported by the police and the Uganda People's Defense Forces for purposes of transparency and avoiding crowds.

"Security will stay at the distribution point from the beginning up to the end of the exercise," reads part of the statement.

This, he said, will expedite the testing process and allow for increased numbers of screened persons for COVID-19. Uganda registered her first case of COVID-19 on March 21 in a male traveller from Dubai aboard Ethiopian Airlines. Currently, Uganda has registered 44 cases of COVID-19. Majority of the cases were travellers from UAE and UK with 14 cases each. Districts with confirmed cases include Masaka, Hoima, Adjumani and Kampala.

Rugunda said all the confirmed persons have been admitted in Entebbe Grade B hospital (15), Mulago hospital (15), Adjumani (1), and Hoima hospitals (2).

“All patients presented with mild symptoms and are improving on treatment. The 11 cases [from Watoto Children's Choir] that were confirmed last night are in the process of evacuation to Mulago hospital. Uganda has not registered any COVID-19 related death, and we pray all those receiving treatment recover fully,” he said. The contacts of the 11 new cases are yet to be identified.

Speaking briefly to NBS television today, the Associate Team Leader at Watoto, Pastor Julius Rwotlonyo  said the affected persons and children are part of the choir members that had returned from the UK two weeks ago and under quarantine in Entebbe.

“I have been in touch with the children and none is in critical condition. I am glad to report that they are doing well,” Rwotlonyo said in a televised Skype interview.

All individuals under self-quarantine completed the mandatory 14-day period on March 31, 2020. For now, at least 1,015 individuals are still under institutional quarantine including those from UAE who responded to the ministry of Health call to report to Mulago for assessment.

Ruguda said more 660 contacts to the confirmed cases have been listed and are being followed up. The contacts have been advised to isolate themselves at home as the health ministry epidemiologists continue to monitor them daily for signs and symptoms of COVID-19.

Meanwhile, screening of individuals has also expanded to Mulago specialised national hospital to cover greater Kampala and designated as an isolation and treatment center. At all regional referral hospitals, isolation facilities have been prepared to receive confirmed cases.

-2 #1 Nalongo Mutiima 2020-04-02 13:01
Why start distributing food in Kampala and Wakiso where the 'idiots' distributed? is it also for cheap popularity?
Report to administrator
0 #2 Amir Manghali 2020-04-02 17:47
Kampala and Wakiso are very vulnerable when it comes to food security they depend on upcountry.

The task force can cash transfers instead of food - to make choices WFP and UBOS can technically assist the process. I pray that the Task Force, emulates the president’s transparency message – he disclosed the source on $150K from Elumelu and 2 cars from Chinese.

Please select deserving beneficiaries and distribute with caution on social distance. This distribution promotes local markets on the items you are about to donate and also considering vulnerable people i.e. pregnant and lactating mothers and PWDS.
Report to administrator
0 #3 Kabayekka 2020-04-02 19:32
If those citizens who want to go to their countryside homes are tested and allowed to get home, it would help to distance them from this infection.

Why stop people who are not sick, beat them, shot them and put them under an expensive military curfew, to look for a safer haven for their lives? And do all this with borrowed government money?
Report to administrator
0 #4 Kabayekka 2020-04-02 19:45
Can this government prove that this food it is distributing for over a month or two is not on borrowed money as it stops and arrests other charity organizations that are hand out food items to the starving populations?
Report to administrator
0 #5 the commenter 2020-04-03 03:55
Quoting Nalongo Mutiima:

Why start distributing food in Kampala and Wakiso where the 'idiots' distributed? is it also for cheap popularity?

May be because if these 2 districts are decimated the Ug economy comes to a standstill. I don’t know... What do you think? I’m hoping you’ll think...
Report to administrator
-1 #6 ndinawe james 2020-04-03 14:44
Thanks for the Aid, the government of Uganda shows humanity always for that we are proud ugandans every where we go.

Thank you Observer!
Report to administrator