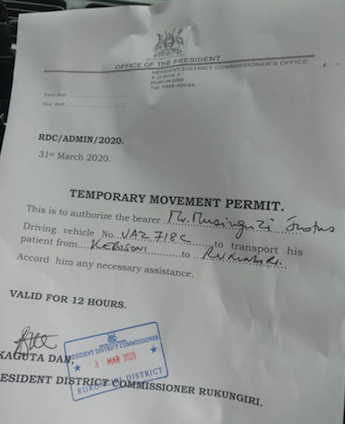 A copy of a travel permit

While President Yoweri Museveni directed the resident district commissioners (RDCs) to grant permission to people with emergencies to travel in private vehicles, securing the permit is such a painful attempt as Baker Batte writes.
Addressing the country Tuesday, Museveni said the RDCs should grant temporary permits to people with medical emergencies to travel to hospitals. Last week, Museveni banned public transport and allowed up to three persons per private vehicle. However, Museveni said this had been abused and yesterday this was banned as well with only essential services such as medical, banking, media among others allowed to continue using their private vehicles.

“The RDC is not far because the telephones are now there… people were jumping in vehicles and running around with no good reason and causing infections,” said Museveni.

A number of Ugandans have taken to social media to air out their frustrations after failing to contact their RDCs as either their phone numers were unavailable or they went unanswered. Following Museveni's ban on private transport, State House shared the telephone contacts of all the RDCs and their deputies.

“I have tried calling the RDC of Wakiso but my phone was picked after almost 30 minutes. My wife is expecting in the coming days that’s why I wanted to get the clearance way in time. But how can I move on foot from Makindye Ssabagabo to Kasangati to get the clearance from the RDC?” said an employee in one of the government institutions who preferred anonymity to speak freely.

Random sampling confirms these complaints that indeed getting RDCs for clearance is very cumbersome. For the 20 RDCs that we sample called, only three picked their phones, the others they either went unanswered or were completely unavailable.

“Do you have any assistance you need from me,” said the Rosemary Byabashaija, the RDC of Mpigi district. When asked about what a pregnant woman who needs to go for antenatal need to be cleared, Byabashaija said, she must come to her office with a photocopy of her antenatal card. “Then I will clear you to travel.”

The other RDCs whose phones rang and were answered instantly were that of Butambala district, Badru Ssebyala and Moses Mugweri of Adjumani district.

“People are coming to our office some with heavily pregnant women, really it doesn’t take a lot of scientific thinking to grant such a person permission,” said Ssebyala.

He added that since the presidential directive, his phone has not stopped ringing.

“Even people who don’t need to travel in vehicles are also calling to ask for permission to go to the hospital. I think we need to clarify that people are free to do whatever they want for as long as it doesn’t contradict the president’s orders,” said Ssebyala.

For Mugweri, in Adjumani, whoever wants to get permission to use private means must walk there from wherever they are coming from to the district headquarters to get written permission to travel. He said, however, those who need emergency medical attention will not be affected because his district has enough ambulances to take them either to Gulu or Kampala hospitals.

“Because of the refugee settlement in our district, we have 13 ambulances and I think they are enough to take people with emergencies to wherever they want to,” said Mugweri. The other RDCs whose phone rang and picked, on the second trial, was Namulindwa Sheeba, the RDC of Luweero district.

However, on picking she said, ‘call me back later; I’m in a meeting.” The same was for Auma Linda, the RDC of Amuru district. For the RDCs of Wakiso, Rose Kirabira and Herman Sentongo of Masaka, all the time their phones were called, they were always busy.

On the other hand, the RDCS of Jinja, Eric Sakwa, Tororo, Owole Nixon, Chris Mike Okirya of Busia, Omara Christopher of Kitgum, Muhindo Aminadabu of Kiruhura, Bakunda George of Ntungamo, Shafique Ssekandi of Kanungu, Locap Peterken of Moroto, Mugume Apollo of Kakumiro, Toko Shaib of Pakwach, Maj. Santos Okot Lapolo of Gulu and Herbert Anderson of Nakawa,  either their phones went unpicked or were unavailable for the more than two times they were called.

The reason the president gave doesn't whole water at all. And these RDCs are going to embarrass the president in the way they are handling the situation.

In Uganda nothing works according to plan. We have to pray for those caught up in this unfortunate circumstances. We are paying for the greed of the immigration officers and police at Entebbe airport.
Report to administrator
0 #2 Kalitunsi 2020-04-01 22:44
Let people travel freely in their personal vehicles. Put up checkpoints.

If you find citizens violating any covid regulations, such as, ferrying people or transporting hitchhikers, then give them a citation.

You can't just restrict people in their homes without providing them with the necessary logistics. We need food and water.

We need hospitals. We need pharmacies. These so called providers doing deliveries are charging exorbitantly for a simple trip that would cost 2000 shillings. They are charging 20k.
Report to administrator
0 #3 Paul K 2020-04-02 08:24
“Even people who don’t need to travel in vehicles are also calling to ask for permission to go to the hospital" the RDC of Butambala district was quoted as saying. I

can't imagine the absurdity of this statement. How can you even suggest that a sick person should walk to hospital let alone seek permission from RDC to travel?

No sane grandfather can mistreat their bazukulu like this.Mr. President imagine your grandchild fell sick, would you ask them to to walk to hosptial?
Report to administrator