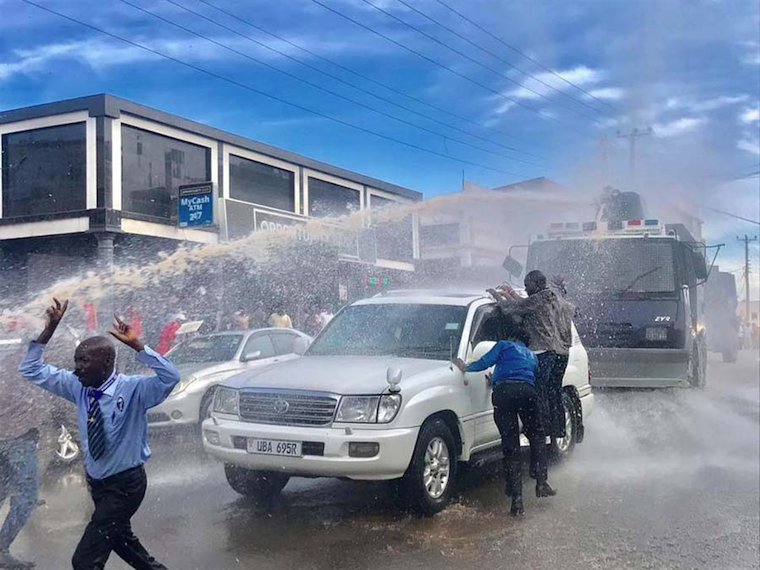 The Constitutional court has nullified section 8 of the Public Order Management Act (POMA) that grants powers to police to block public meetings.

Court nullified the section on grounds that it violates the constitutional freedom of assembly and the right to demonstrate peacefully. The nullified section grants discretionary powers to the inspector general of police, who, in turn can delegate or authorise any other officer to stop or prevent public meetings.

However, in a majority decision of 4-1, the judges today noted that parliament bluntly passed POMA in total disregard of Article 92 of the constitution which stops the house from passing any law that may alter any decision or court judgment. Those who ruled in favour of the petition are Kenneth Kakuru, Geoffrey Kiryabwire, Elizabeth Musoke and Cheborion Barishaki while Stephen Musota delivered a dissenting judgment.

In their judgment, the justices noted that the said provision was purposely made by the legislature to water down the 2008 decision delivered by the same court in the suit where Butambala County MP, Muwanga Kivumbi challenged section 32 of the Police Act which almost gave police similar orders.

In their view, section 8 of POMA was clearly a rebirth of section 32 of the Police Act, which had earlier been nullified by the same court. They contend that subverting the import of a court’s decision or judgment like the way parliament did, interferes with the doctrine of the separation of powers contained in the Constitution.

They noted that such a decision undermines judicial decisions, which has dire implications for the future application of the checks and balances necessary for the functioning of a civilised democracy and prevention of dictatorial behaviors by the three arms of government.

“All efforts must be made by all arms of government to protect this young constitutional democracy. The enactment of section 8 of POMA by the legislature following this court’s decision striking down a similar provision in the Police Act was a blatant attempt at disregarding the checks and balances on the legislative powers," reads Barishaki’s judgment.

They, however, warn that this would have also created several complicated constitutional questions since it would infringe on human rights freedoms as well.

“It, therefore, defeats logic as to why parliament would rush to pass an Act containing provisions that are in pari material with those that were declared unconstitutional,” the judges ruled.

The decision by the Constitutional court arises from a successful petition filed by five human rights activists including individuals and Civil Society Organizations on December 10, 2013.

They ran to court challenging the constitutionality of various provisions of the POMA. However, they later filed an amended petition on June 27, 2016, in, which they only zeroed on section 8 of the same act.

Muwanga Kivumbi welcomed the court decision, saying he hopes it will reduce police impunity with, which it has been violating the constitutional rights of citizens.  He said that he was humbled to have been part of the democracy frontiers in the country.

People have lost lives and livelihoods because it has taken many years for the Constitutional court to handle this case.

As noted by their lordships,“All efforts must be made by all arms of government to protect this young constitutional democracy", including resolving constitutional matters which if delayed would cause loss of life and livelihood.
Quote | Report to administrator
-10 #2 Mama Mia 2020-03-26 22:25
These four stooges should not be allowed to put on the wigs.

Their opposition to the rule of law is well documented. Therefore I am not surprised. Sad!!!!)

I don't think there is a human being behind these comments. I think it is a bot programmed to spew nonsensical garbage.

I shall treat the facetious remarks with the contempt they deserve.

If it is not a bot, then the individual behind the comments is simply an attention seeker who deserves pity.
Quote | Report to administrator
+1 #4 Kabayekka 2020-03-27 05:36
One cannot see how this ruling will stop vote rigging in this young democracy!
Quote | Report to administrator
-1 #5 Wainanchi 2020-03-27 06:57
Violence and breaches of law and disruption of normal ludifein any civilized country is punishable.

Theregore,Uganda Police continue to provide peace and order and prevent any bigger rallies aimed at disrupting lives of Uganda citizens.

Especially now that we are all in lockdown and as law abiding and caring citizens should stay away from each other at least two meters and in groups of less than 50 peoples.

This is obviously done to cause instability in Uganda and it must be blocked.
Quote | Report to administrator
+1 #6 Lysol 2020-03-27 08:56
New world order is coming after the pandemic of COVID-19.

African dictators beware. No more playing the Chinese against the Western powers. Games over.
Quote | Report to administrator
+1 #7 Webz 2020-03-27 10:22
Are these the same judges who ruled that the term and age limits be expunged from the constitution?

Though this is a positive ruling they still are hypocrites.
Quote | Report to administrator
0 #8 Kirya 2020-03-27 19:39
I knew Kiryabwele is a big disappointment.

The little money you are paid is not worth the killing of our people in the streets by the police because they can.

All Ugandan lives matter. Work for the people who pay you
and not for the dictator who has few more years to live.
The courts can make a difference.
Quote | Report to administrator
0 #9 Wainanchi 2020-03-29 05:14
If I were the Police I would just ignore this.

Since demonstrators are paid and inspired from outside they can turn to their masters and financiers for help.I would propose the deal...
Foreign financiers..

Put your money first to Uganda for its development and do not sabotage Uganda to be your neo colony.

OncevUganda is fairly developed using your investments I would allow more gatherings.

In this way all sides will be happy. But now you are creating development problems in Uganda by withholding investments and fuelling social unrest Do you think Ugandans are blind and fools?