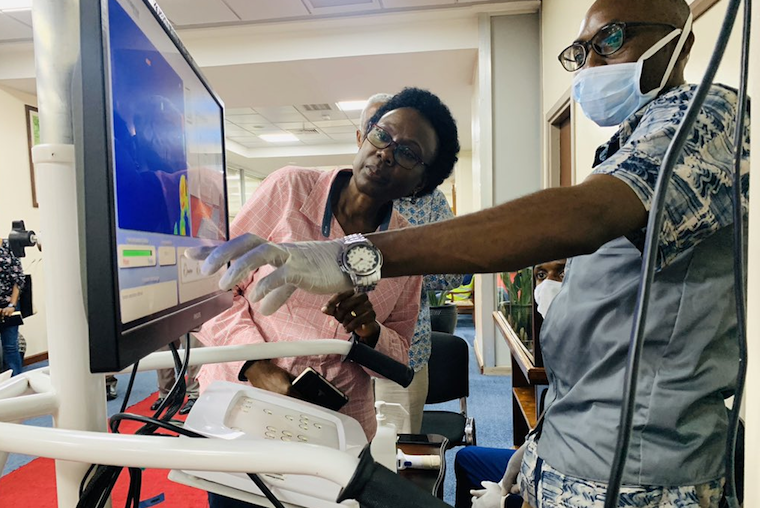 Even before the first case is confirmed in Uganda, the fast-spreading coronavirus is slowly shutting down public life.

Schools have banned visitation days, people are quietly steering away from movies, churches, football matches and music shows among other crowd-pulling events. All crowded spaces are becoming no-go areas.

“The office of the Bishop of West Ankole diocese informs the general public that pastoral visits and confirmation services have been suspended in efforts to prevent the spread of the coronavirus. This suspension is in accordance with the Ministry of Health and Church of Uganda guidelines…”

He told archdeacons, vicars, curates, lay readers and the entire laity that the suspensions start with immediate effect.

“The weekly Sunday services and other smaller church functions will continue as always but leaders are instructed to strictly observe the ministry’s guidelines. They should ensure use of the sanitizer and other given safety measures….” The statement signed by Didas Natweta, the diocesan secretary, reads.

President Museveni was supposed to address a press conference today in a room packed with journalists. That was considered high-risk. The president will now address the nation on the country’s preparedness for the coronavirus via a video link.

In a similar show of panic, the ministry of health surveillance team, acting on an alert from tenants of the downtown Royal Complex dispatched an ambulance to evacuate a suspected coronavirus victim on March 13.

The tenants claimed a woman had locked herself in a room for one week. It later emerged that the woman was under self-quarantine because she had just returned from a country flagged as high-risk. Tests returned negative.

In the same week, the director-general of Health Services, Henry Mwebesa, called out boarding primary and secondary schools for stopping visitation days as a precautionary measure. According to Mwebesa, the ban was an exaggerated reaction since Uganda has no known case of coronavirus.

Such reassurances by top health professionals have not stopped people from taking extreme measures to shield themselves from the disease.

Health minister Ruth Aceng has been at the forefront of calming frayed nerves. She has carried out weekly on-the-ground visits to Entebbe International Airport to ensure health teams and airport staff are doing the right checks.  The panic seems to have crossed to the social scene. A number of events are being cancelled one-by-one.

On March 16 during a press conference at the French embassy in Kampala, the Ambassador Jules-Armand Aniambossou announced the cancellation of activities to mark the 4th edition of the Uganda-France Friendship week.

The weeklong activities were supposed to be capped by a football match between ex African all-stars and an all-star Ugandan team at Namboole stadium.

According to the ambassador, he met severally with the minister of Health Ruth Aceng several times and updated her on the activities of the friendship week and also assigned an epidemiologist to undertake a risk assessment of all the events.

The assessment cleared all the events but recommended that the COVID19 guidelines for safe mass gatherings were strictly adhered to. But due to the fast-evolving coronavirus pandemic; a decision was made to postpone the event.

Africa has so far recorded relatively few coronavirus cases compared to the rest of the world, but governments across the continent are taking no chances as they race to stop the spread of the virus on their shores.

Sudan has sealed off all seaports, land crossings and airports, a spokesman for Sudan’s Transitional Sovereign Council, Mohamed Al-Faki Suleiman, said in a press statement Monday.

The council has declared a state of medical emergency and formed a committee that will prevent the spread of coronavirus into the country.

The committee will receive citizens stranded in land crossings and prepare places for them to go into quarantine in the country, which has so far recorded one case of COVID-19, according to the African Center for Disease Control.

Twenty-seven African countries have recorded only 347 coronavirus cases, according to the World Health Organization on Monday. Four countries -- Egypt, Algeria, South Africa and Morocco -- account for more than half of the novel coronavirus cases on the continent.

Seven people have died from Covid-19 in Africa -- four in Algeria, two in Egypt and one in Morocco.

Many African countries are shutting their airports and land borders to keep out people from countries that have a high number of coronavirus cases.

Hundreds of international flights have been canceled, schools have closed and travelers from coronavirus-hit countries have been restricted or, in some cases, banned from visiting some countries in Africa.

Egypt, with the highest number of coronavirus cases in Africa, announced it was suspending flights from all its airports starting Thursday to stop the spread of the virus, Ahram Online reported.

The number of confirmed coronavirus cases in Egypt is 126, according to the World Health Organization. Schools and universities have been closed in the country for at least two weeks, state media reported.

Some countries such as Djibouti are yet to record a single case, but it has suspended all international flights to the country, the US embassy in Djibouti said in a statement announcing the suspension.

There is widespread support on the continent for governments to impose travel bans. One Twitter user noted that Western countries would have acted swiftly to place travel sanctions on travellers if the outbreak originated in Africa.

“I hope African countries close up their borders to all these majorly affected countries because we all know the west would ban travel had coronavirus started in Africa,” they said.

The travel bans and restrictions go against the advice of the WHO, which has urged countries to not apply blind travel restrictions in a way that would impact trade and travel.

WHO Africa’s Dr Mary Stephen told CNN that many African countries, which were initially screening passengers from countries with outbreaks and also placing travellers from virus-hit countries on quarantine, may now be making travel ban decisions based on panic.

“The outbreak is evolving. It used to be China and now it is Italy and other countries are following after it. So, we must be careful because we have seen an increasing number of countries imposing travel restrictions, and that means their perception of risks have changed. But have they done a risk assessment to their countries or are they just implementing those measures based on their perception?” she said.

Stephen, who is with the organization’s emergencies team, said African countries need to enhance their capacities to detect early, isolate and track all patients’ contacts and effectively manage the sick to curb the spread of coronavirus.

She added that airport screening and a robust surveillance system were effective ways to detect cases from travelers without symptoms.

“WHO continues to advise countries not to impose travel restrictions but countries also have their sovereignty,” she said.

‘A ban on foreign nationals’

With 61 confirmed cases as of Monday, South Africa has the second-highest coronavirus numbers on the continent and has declared a “national state of disaster.” It has also put in place a number of travel restrictions on foreign nationals in a bid to halt the spread of the virus.

“We are imposing a travel ban on foreign nationals from high-risk countries such as Italy, Iran, South Korea, Spain, Germany, the United States, the United Kingdom and China as from 18 March 2020,” President Cyril Ramaphosa said in his address to the nation on Sunday.

Ramaphosa said the country was seeing an internal transmission of the virus that was first detected in a group that traveled to Italy. He said the government will take “urgent and drastic measures’’ to protect the citizens and its economy.

Ramaphosa addressed the nation on Sunday. Visas issued to nationals from affected countries before the travel ban have also been revoked, the president said. Ramaphosa said foreigners who have visited these countries in the last 20 days would also be denied a visa to travel to the country.

He announced the closure of half of the county’s land ports and schools and banned public gatherings of more than 100 people across the nation.

In Kenya, the government raised the sta kes by imposing a travel ban on foreigners from all countries that have reported any case of coronavirus. The directive will come into effect on Tuesday and remain for a month, the government said in a statement on Sunday.

+7 #1 Labson 2020-03-18 09:10
Coronavirus should teach African leaders a great unforgettable lesson. For them to invest locally and have love for their local services is but the most prudent thing to do.

We have had cases where these leaders, their families and cronies have opted to fly overseas for their ailments since the local facilities don't suit their status.

Have they realized now that with coronavirus even the overseas health facilities that they always resort to have closed out foreigners?

A leader who will modernize all the district health units in the whole Country to an acceptable quality that they themselves feel comfortable to visit will be the 'winner' short of that, no leader who has had the chance and failed that crucial test to expect to win VOTES!
Report to administrator
0 #4 Akot 2020-03-18 19:06
Labson, thanks!

Coronavirus has brought us all to reality, right?

Who, which country can say today it's better than the others & can impose itself on them?

Not even the richest well governed European countries where demon rulers go for healthcare, are spared & each has closed borders!

Not even USA is spared!

So, why is Museveni the only virus Ugandans keep in power to infect & destroy them so?

Ugandans know their UNITY is needed to get rid of virus Museveni by now, right?

Which tribe, which region is fighting another?

How will bringing down the tribalistic systedm & UNITY that will make Ugandans ONE people & show virus Museveni way out, dangerours to Ugandans?