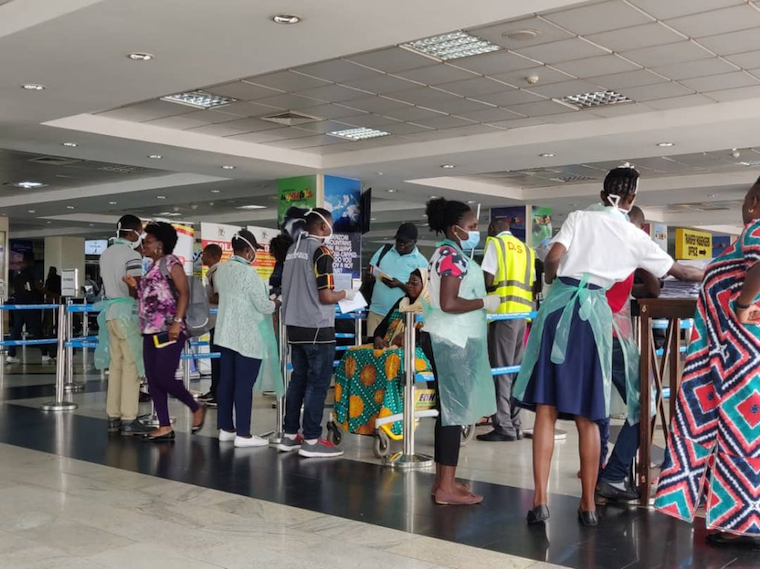 Passengers being screened for coronavirus at Entebbe Airport on arrival

According to the Health ministry, these countries have reported large cumulative numbers of infected persons. Some have also reported a high number of new cases in the last 24 hours. The new development comes after the government last weekend put travel restrictions on seven countries;  Italy, Iran, South Korea, France, China, Germany and Spain.

This brings the affected number of countries to 16. Dr Jane Ruth Aceng, the minister of Health says that travel to the 16 countries has been restricted because they pose a threat to Uganda. So far, Uganda has not reported any cases of COVID-19 and the minister says that government is determined to undertake more preventive precautions to avoid importation of the virus into the country.

Travellers from the restricted countries who insist on travelling to Uganda will have to undergo a mandatory 14-day health self-quarantine that will be met at their own expense. Travellers who refuse to carry out self-quarantine will be asked to immediately leave the country.

“Uganda has no travel ban as has been reported by some people. We are not stopping anyone from coming to Uganda but people in restricted countries need to know that they will be followed up. We have put out the guidelines of self-quarantine on our website and those who are travelling should come prepared with an idea of what they will go through,” Dr Aceng explained.

On March 9, Uganda refused 22 European delegates who had travelled to take in Uganda-EU Business Forum from entering the country after they refused to self-isolate themselves. So far, 1,623 travellers have been followed by the ministry and asked for self-quarantine since COVID 19 was declared in China in December 2019. Of these 1,071 are Chinese, 244 are Ugandans, 443 are Italians and 34 are from South Korea.

According to WHO, some of the reasons that restrictions were put included; limited capacity to respond to a mass outbreak in their countries, the disease is hard to control, the disease is a public health emergency of international concern and public anxiety. Others put restrictions due to the economic impact an outbreak would have on their economy.

Globally over 118,000 infections have been reported with over 4,000 deaths. In Africa, 11 countries have reported cases. These include; Egypt, Algeria, Algeria, Nigeria, Tunisia, Morocco, Senegal, South Africa, Cameroon, Togo, Burkina Faso and DR Congo.

I always cry for my beloved country. If we don't wakeup our beloved country will go into the hands of foreigners .
Report to administrator
0 #4 Paul K 2020-03-13 20:27
I wonder how they are going to monitor the implementation of self quarantine?
Report to administrator
0 #5 Morris 2020-03-16 02:08
Sometimes a simple mistake can cost a lot. Australia is not in the list of the 16 Countries but the Editor goes on to post with error.

It is Austria, but not Australia. Now many travellers from Australia upon reading this cancelled their flights over the weekends which is very costly.
Report to administrator