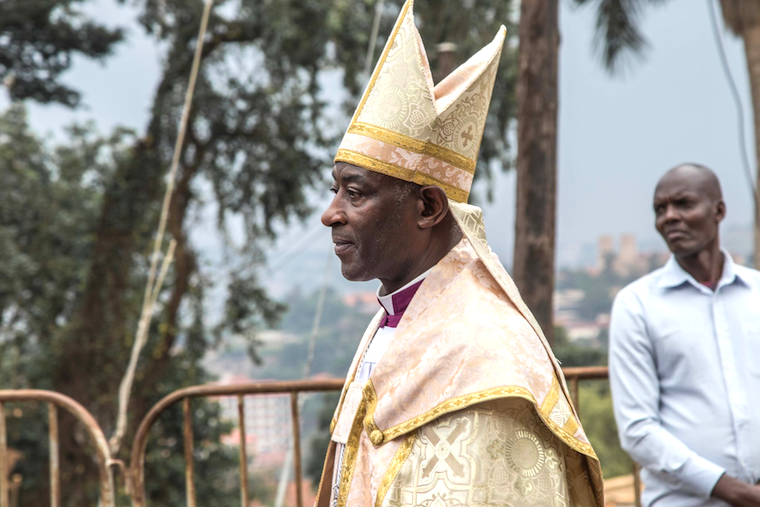 Rt Rev Dr Stephen Kaziimba Mugalu has officially assumed the leadership of the Anglican Church in Uganda. Kaziimba was enthroned as the 9th Archbishop of Church of Uganda (CoU) at a colourful ceremony held at St. Paul’s Cathedral, Namirembe in Kampala on Sunday.

The special service was attended by among others; President Yoweri Museveni, speaker Rebbeca Kadaga, Nabagereka of Buganda Sylvia Nagginda, Katikkiro of Buganda Charles Peter Mayiga, 11 archbishops and 30 bishops from across the world, 39 active bishops under CoU and their retired colleagues.

During the enthronement, the outgoing archbishop, Stanley Ntagali abdicated the position and handed over the provincial staff – a symbol of the archbishop’s spiritual authority to Kaziimba. In his last remarks as he handed over, Ntagali said that he has seen God's love and faithfulness.

"I am very happy to retire today which by God’s grace happens to be my 65th birthday. It is my joy to congratulate Rt Rev Stephen Kaziimba, I pray that God guides you in your leadership as Archbishop of Church of Uganda," said Ntagali.

Before signing off his abdication, Ntagali handed the new archbishop the CoU Constitution, the Canons, Vision 2020 and his hand over-report. Kaziimba was then presented to the congregation and renewed his vows. The 39 active bishops under the CoU pledged canonical obedience to the new archbishop.

The dean of the church of the Province of Uganda, Jackson Nzerebende then guided Kaziimba to his provincial chair, symbolizing that he was elected to lead the bishops and the entire Church of Uganda.

In his sermon during the enthronement service, the Archbishop of the Anglican Church in North America, Rev Foley Beach, said this was a historic occasion and appreciated CoU for its faithfulness to the gospel of Jesus Christ.

"You have been a bright light for the world. You said no to disobeying the word of God, you said no to immorality [homosexuality], many wish their leaders would be like you...thank you for your boldness and your example," said Foley.

He tasked Kaziimba to heed to the call of Jesus and follow him in his leadership.

"As leaders, we have to go to the people, care for them, love and help them. Share your very self with them. We are called to be servants, do justice. My brother Steven, this is what we are called to do...sacrificial, steadfast love. Your challenge is to remain committed to God's promise and be steadfast," Foley tasked the new archbishop.

Rev Foley tasked Kaziimba to fulfill his ministry despite a number of challenges that are to come before him during his tenure. Kaziimba calling started in teaching the Sunday school children in November 1979 after his confirmation. He later served in Madudu Church of Uganda as a catechist from 1981 to 1983.

Kaziimba was elected by the House of Bishops Archbishop in August 2019. The then Bishop of Mityana Diocese, beat top contenders like the Bishop Sheldon Mwesigwa and Samuel George Bogere Egesa, the bishops of Ankole and Bukedi Dioceses.

He was trained as a lay-leader at Baskerville Theological College Ngogwe in 1985 and was posted to Lugazi St. Peter’s Church. Between 1988 and 1990, he trained at Uganda Martyrs’ Seminary and was ordained in December 1990 by Bishop Livingstone Mpalanyi Nkoyoyo.

He served as assistant vicar at St Apollo Kivebulaya Church of Uganda, Nakibizzi between 1990 to 1994. In 1996, Kaziimba completed his Diploma in Theology at Bishop Tucker Theological; College, and was posted to Katente parish as parish priest from 1997 to 2000.

He was transferred to Mukono Cathedral as vicar in 2,000 and later appointed acting provost of Mukono Cathedral by Bishop Michael Ssenyimba. In 2004, he was confirmed as the provost of St. Philip and Andrew‘s Cathedral before becoming the 4th Bishop of Mityana Diocese on October 26, 2008, replacing Bishop Dr Dunstan Bukenya.

0 #1 Kabayekka 2020-03-02 12:28
It seems that in this Ugandan Christian religious dictum killing and homesexuality are the worst sins to date.

I congratulate Archbishop Kazimba and the Church Of Uganda . I watched the fantastic ceremony and thought: not everything has been destroyed.

That being said , I must say that I have lost Count of how many times Museveni and his wife have attended these ceremonies under the last 34 years.

There they sit and look on as a transition from one leader to the next takes place. They see Nkoyoyo retering and handing over to Orombi , Orombi handing over to Ntangari , and now Ntangari to Kazimba.
Report to administrator
+1 #3 Wooden K. 2020-03-02 12:59
They were there when Shiekh Mulumba , and Luwemba were in charge , now it is Mubajje

They come in when Cardinal Nsubuga was the main man ; and they attended his funeral where Museveni powered out his personal relationship with Nsubuga .

Then they were present when Wamala was enthroned as Cardinal . They have seen him retire . I am sure they will be there when his time to rest comes .

But for them , it never crosses their minds that it is ironic for someone who has failed or refused to wed to be attending all other people`s weddings as the Guest Of Honour ?

Cardinal Nsubuga helped bring Museveni into power by confusing the two senile Okellos who were both Catholic.

1) Cardinal Nsubuga did NOT "confuse " the two Okellos . He told them the truth , which was that the people were not going to accept them as leaders because the 2 were in charge or part of a savage army ( UNLA) that had comitted attrocities .

Cardinal Nsubuga advised the Okellos to contain their army while they negotiated with NRA for some kind of "soft-landing". He, point-blank, informed them that Uganda was going to have a new leadeship without them ,whether they wanted it or not.

NOTE : Cardinal Nsubuga cannot be resposible for what Museveni turned out to be after 34 years.
Report to administrator
-1 #6 Wooden K. 2020-03-03 13:07
2) Churches - I mean real churches - have always and will always play a role in what happens in society. No news there.

Saudi Arabia financed Amin promise to Islamize Uganda . In deed , many christinian army officers were forced or pressured to convert to Islam

Kassim Obura , the notorious killer was one of those . A retired Munyoro General who become Museveni chief pilot is another .

Yosuf Odyek who commande Simba in Mbarara was a catholic acholi before he converted to save his life
In Old Kampala , one was paid 2000 shillings to convert . That was how many Banyarwanda become
muslims.

What about today ?
Many civil servants and security people claim to be "born -again" because that is what it takes to get noticed and be favoured by the so called first family.
Report to administrator