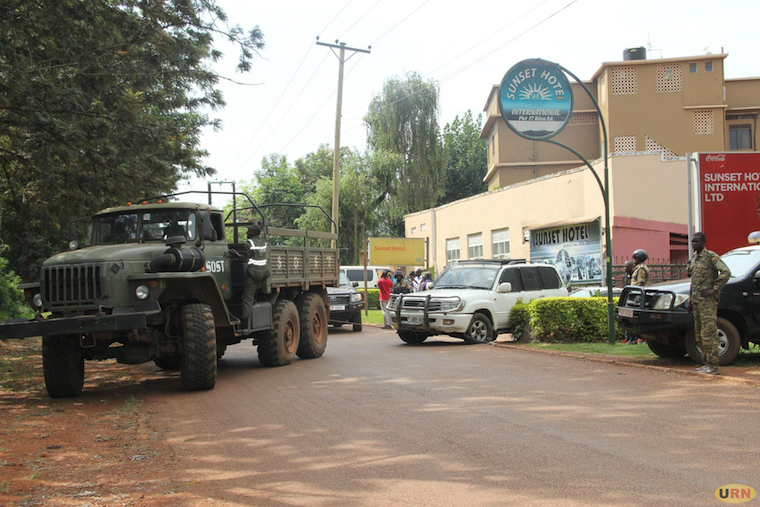 Former presidential candidate Dr Kizza Besigye has been arrested in Jinja. Besigye was picked up from Sunset hotel where he spent a night ahead of a rally planned to take place later today in Jinja town.

The area was first surrounded by both uniformed and non-uniformed security personnel, to stop Besigye from exiting the hotel. The officers also searched every vehicle that left the premises to look out for him in vain.

At around 11 am, Besigye, clad in blue checkered shirt walked out of his suite, to face off with officers of the UPDF Service Brigade who were waiting at the hotel gate. They dragged him aboard his vehicle to Nalufenya police station, sparking protests among his supporters across Jinja town.

He is Part of the Problem called NRA Terrorism against Ugandans!!If Not ! Let him elaborate How they Killed 2.000.000 People in Luweero and Recruited Kid Soldiers to Fight for them!!Today For fear of Bobi Wine His Job is Diverting attention to Himself..to Cause imbalance in the ranks of People Power!!and He is Well informed about Orders to Shoot and Kill Supporters of Bobi..Rita and Kyeyune are already Gone...Wake up !!

It is never Late..We now know and we will Play..Amaaandla..nga wethu...
Report to administrator
12