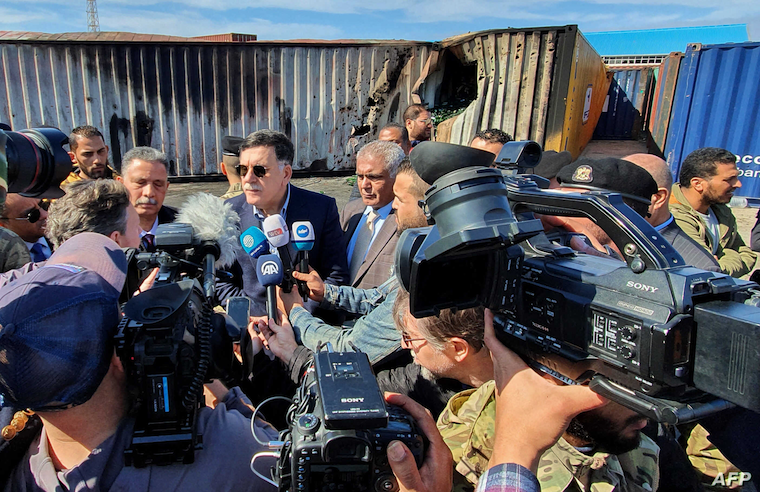 Libya's Tripoli-based, UN-backed "national unity" government says that it has suspended talks with forces under the command of General Khalifa Haftar, following an attack by Haftar's forces on the port of Tripoli on February 17, which targeted a ship reportedly carrying weapons from Turkey.

The shelling attack on a cargo ship in Tripoli harbor by Libyan forces under eastern commander General Khalifa Haftar appears to have dealt a set-back to UN-sponsored talks in Geneva, after members of the Tripoli-based "governing council" said they would no longer meet Haftar's representatives.

The attack on February 17 came as representatives of the UN-recognized Government of National Accord (GNA) and Gen Haftar’s Libya National Army (LNA) were meeting in Geneva, Switzerland for the peace talks. The GNA saw the attack as a violation of a truce that came into effect in January but the LNA claimed that the attack targeted a vessel carrying weapons from Turkey.

Both the GNA and Turkey have disputed claims that there was a vessel carrying weapons from Turkey. Nonetheless, the GNA says, Turkey’s presence in Libyan waters of the Mediterranean sea is in line with memorandum of understanding (MOU) signed between the two nations in November last year.

Rival Libyan governments disputed the details of the attack on the Lebanese ship, which forces under Haftar claim was carrying weapons. Sources in Tripoli dispute the claim and accuse Haftar of killing several civilians in the attack. Haftar's forces deny the allegation.

Haftar met with Russian Defense minister Serguei Shoigou in Moscow to discuss the latest developments in Tripoli, after meeting with the top US diplomat in Libya at Haftar's headquarters in the eastern Libyan town of Rajmah.

12-point plan to resolve the conflict

The speaker of Libya's House of Representatives, Aquelah Salah, put forth a 12-point plan to resolve the Libyan conflict, Wednesday, according to Arab media. The plan calls for the "disarming of militias in the capital, Tripoli," and authorizes Haftar's forces to carry out the disarming.

The plan is unlikely to be welcomed by the Tripoli-based unity government.  The United Nations' Libya envoy, Ghassan Salameh, is calling for a cease-fire between the warring parties "that will be transformed into a permanent agreement."

The European Union says that it would be willing to monitor the cease-fire and arms embargo on the rival parties. The EU offer is unlikely to be accepted by Haftar, who says his forces' goal is to "capture all of Libya," including the capital.

In Ankara, Turkish President Recep Tayyip Erdogan insisted that the "EU has no authority to make any decisions regarding Libya," and went on to say that Turkey would continue to support the Tripoli-based government of Prime Minister Fayez el-Saraj.

He said that [Ankara] will continue to support the legitimate government in Tripoli against Haftar, whom he claims is trying to carry out a coup.

Erdogan also says that Turkey is "gradually strengthening its position in the region," alluding to an agreement over maritime borders with the Tripoli government that is disputed by regional states, including Greece, Egypt and Cyprus.

In a statement, Elmahdi S. Elmajerbi, the Chargé d’ affaires at the Permanent Mission of Libya to the United Nations (UN) clarified that on November 27, 2019, the Government of National Accord of Libya and Turkey signed an MOU on delimitation of maritime jurisdiction areas in the Mediterranean sea.

“It is among the fundamental accepted principles of both written and customary international law that a State may exercise its full sovereignty over its maritime territory and its sovereign right to define its continental shelf and exclusive economic zone in accordance with the provisions of international law,” Elmajerbi stated.

“Furthermore, it is a right guaranteed by all international agreements concerned with the regulation of maritime affairs and maritime borders,” he added.

Elmajerbi further argued that in conformity with the provisions of the international laws and Libyan national laws, the GNA is competent enough to enter into agreements with other countries on the demarcation of its territorial sea.

Elmajerbi said that the MOU with Turkey was result of extensive “in-depth negotiations, correspondence and exchanges of visits” which started in 2007.

The negotiations were suspended in 2014 but resumed four years later in 2018. Libya engaged Turkey after the collapse the 2004 negotiations with Greece after the two countries disagreed over the ownership of some islands in the sea.

“Greece insisted on defining its maritime jurisdiction vis - à-vis Libya on the basis of extremely small uninhabited islands of no legal significance. Greece insisted on drawing a median line based on those island outcroppings and refused to apply the principle of proportionality that is used internationally in such situations,” Elmajerbi said.

At the collapse of the talks in 2014, Greece reportedly signed concession agreements with its allies in the East Mediterranean Gas Forum to acquire a monopoly on the production, liquefaction and transport of gas.

“The Government of National Accord completely rejects any interference in its internal affairs. It affirms its full respect for the rights and sovereignty of its neighbouring countries, both opposite and adjacent. It also stresses that the memorandum of understanding does not affect the sovereign rights of any of the countries neighbouring Libya or bordering on the Mediterranean,” Elmajerbi further stated.

Additional reporting by our reporter