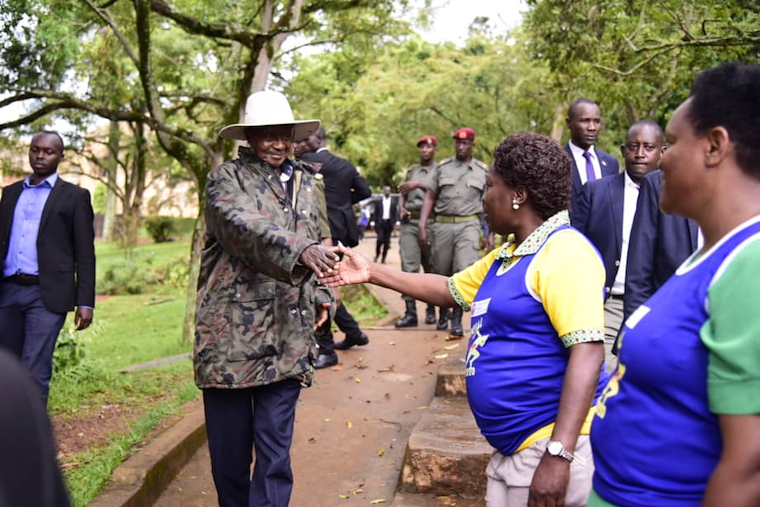 Museveni is received by speaker Rebecca Kadaga at UCU

The directive followed a request by the UCU guild president Timothy Kadaga on the basis of cumulative cases of thefts taking place in villages where a sizeable number of students reside. Kadaga said that several students have lost personal belongings and equipment through house break-ins, while others are waylaid by thugs, thumped and robbed.

The deputy vice-chancellor in charge of finance and administration David Mugawe explained that up to 10,000 UCU students reside outside the university campus in the villages of Kauga, Bugujju, Kirowooza and Kiwanga.

UCU has a population of 13,000 students. Mugawe made reference to records at the university police station which indicates that seven to ten cases of laptop-thefts are reported every month.

In response, Museveni pledged to send experts to work with the university and municipal leaders to install security lights on major roads around the university citing Bishop Tucker road and UCU-Nantabulirwa road. He also pledged to cause a review of taxes imposed on educational institutions.

Museveni made an impromptu visit to UCU on Saturday evening, after failing to attend a marathon organized by the guild council earlier in the day. The marathon was intended to raise funds for students who become vulnerable and fail to pay tuition fees before their final year.

The speaker to parliament Rebecca Kadaga who flagged off the marathon supported president saying that lights along the road are very important since students move all the time but in darkness. Museveni pledged to support the initiative with Shs 80 million. He made a partial payment of Shs 30 million.

CCTV Cameras have not Yielded the intended Goals..due to Corruption!!

You hear The Almighty Bloating about not Turning in Rwandese Because the are Spies !!

What is there to Spy About!?? Sewage,Corruption,Safe-Houses, Homosexuality, or Police Brutality?? All these are Common place in Uganda...Pack and Live us Alone..We are more than Tired..
Report to administrator
+1 #2 Lysol 2020-02-24 21:43
These lights only can work better if there are also guards who can response to the threats in a timely manner

Some of us have those lights installed around our homes and know better.
Report to administrator