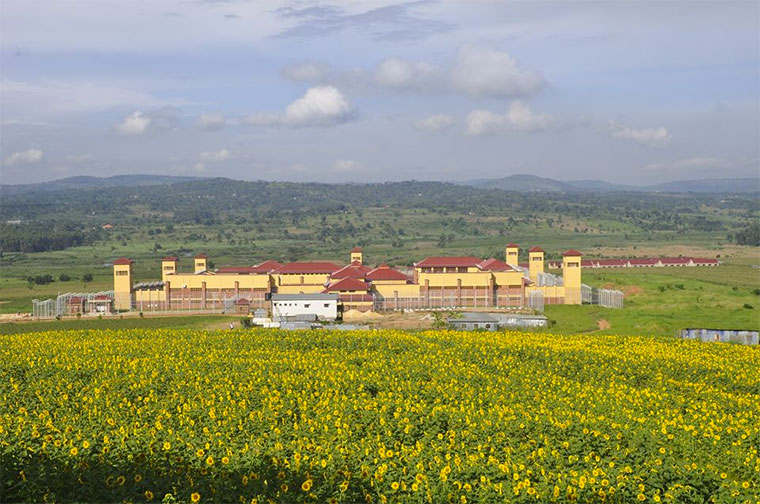 The Shs 25 billion facility sits on 5-acres of land and is situated about 55 kilometers northwest of Kampala, in Wakiso district. Construction of the state-of-the-art facility was funded by the Justice, Law and Order Sector (JLOS) with Ambitious Construction Limited as the contractor.

It was built with large sized prison wards and 30 cells, all fitted with modern sanitary facilities. It has a fully-fledged medical wing complete with an inpatient section, a contact visitors room and isolation rooms for contagious diseases, and a kitchen equipped with power-saving technology.

The facility also has classroom blocks equipped with a computer lab and library, a large workshop block specifically designed and built for prison industry activities, fully-fledged sports facilities including a football pitch, a volleyball court, a basketball court and a lawn tennis court in addition to a multipurpose hall.

Its completion is expected to decongest Luzira upper prison which is chocking with more than 3,000 inmates, five times above its holding capacity of 600 inmates. Byabashaija observes that Kitalya mini-max prison is a game-changer in the war against prison congestion.

"This facility was designed by ourselves, We only brought the manager of Plantech [Construction Company Ltd] to help us put our idea on paper and have a facility of this nature...It is called a mini-max because all operations are manual. We do not have an automatic door here, we don’t have laser beams to control movement within the corridor or even the outer rim. Once you’re using electronics and laser beams then it becomes a super-max the opposite of mini-max," he said.

During a walk around tour, Byabashaija who has served as commissioner general of the Uganda Prisons Service, for now, 15-years, joked that the facility could accommodate up to 10,000 inmates and remain with more space beyond its official capacity of 2,000 inmates since Luzira with a capacity of 600 inmates is currently holding 3620 inmates.

David Nsalasata, the director of production at the Uganda Prison Service notes that they benchmarked from different prison jurisdictions in different countries to come up with the facility. He notes that much of the delay in the construction was a result of several changes in designs.
Nsalasata notes that Kitalya is considered a no-escape facility with over six layers of security, which include among others multiple watchtowers, over 100 CCTV camera points and a control room with 24hour on-site and off-site surveillance, layers of barbed wire fences around the entire facility, canine, and human security.

"This building you see here is a replica of the upper prison with zero escape rate. This prison has six levels of security right from the chain link fence to the wall, to the towers, to the doors, to the human shield, to the cameras to the canines which can be introduced. With those six levels of security please don’t end here, you will not come out." said Nsalasata.

Julius Arnold Tayebwa, a senior civil engineer who has been heading the contract management team from the ministry of Works and Transport says that everything has been built to the required standards.

Byabashaija notes that before the facility receives the first inmates, several officers including Bitaliwo Onesmus who is the appointed officer in charge of the facility will be taken to different countries to benchmark on how such facilities are run. Byabashaija says that soon after the benchmark and full equipping of the facility, all long-term servicing convicts will be transferred to Kitalya.

"The emphasis, we have seen the facilities; the hospital facility, the kitchen facility, the wards, the visitors' centre, the recreational facilities - the basketball court, football pitch. This is what a human rights-based approach is about. This is what focusing on human rights is all about. We pride ourselves as Uganda in having one of the best correctional programs. We now have a facility that takes into consideration human rights concerns. It is not just enough to have the security facility." said Odoi.

Odoi notes that the facilities established, marks the beginning of the end of congestion in prisons.

"This is the biggest project since colonialism, this is the biggest prison for the sector ever and it has given us the confidence to try and do something bigger. Last year we achieved a significant milestone as a sector as Uganda Prisons when we were able to have our remand population below 50%." Odoi said.

Any high tech security correctional facility (prision) can be bridged Things normally don't like they seems. The annal of history is full of such cases.
Report to administrator
0 #2 karemire 2020-02-24 23:54
(a) First class prison and no first class hospital for us. What a shame? (b) When I hear of (... don't enter here ... you will end here...",

I am reminded of the German attempt to exterminate the Jews during the WW2.

It would not surprise me if they have built in there the facilities for cremating prisoners too. What a thought!!.
Report to administrator
0 #3 Lakwena 2020-02-26 07:43
Quoting karemire:

I am reminded of the German attempt to exterminate the Jews during the WW2.

It would not surprise me if they have built in there the facilities for cremating prisoners too. What a thought!!.

Karemire, you forgot "First Class school", where most of our crime related problems would have been solved.

In other words, that is what a Police State is made of: more prisons.
Report to administrator