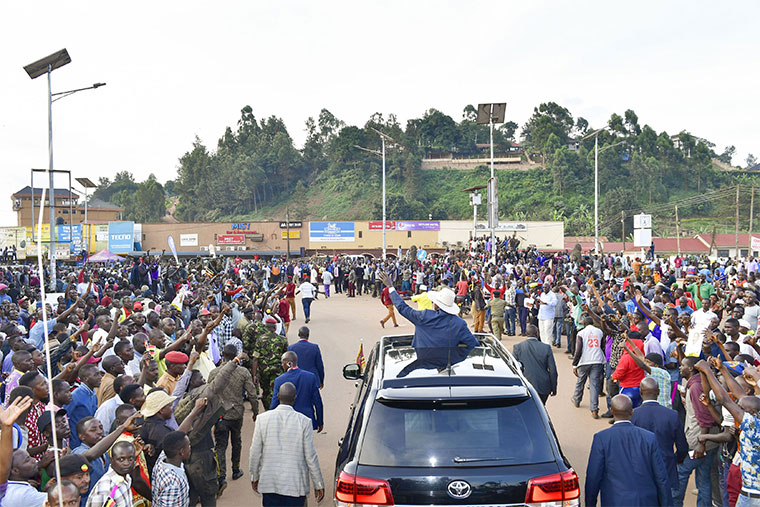 President Yoweri Kaguta Museveni has said Rwandan spies arrested in Uganda will not be handed over to Rwandan government. Museveni and his Rwandan counterpart Paul Kagame, met at the Katuna/Gatuna border at the fourth quadripartite summit to attempt to resolve the soured diplomatic issues between the two neighbouring states.

Rwanda closed her borders with Uganda in February 2019, and also advised its citizens against travelling to Uganda, saying their government cannot guarantee their safety. At the Katuna/Gatuna border on Friday, Museveni and Kagame signed an extradition treaty which constitutes the legal framework to handle cases of justice including nationals engaged in subversive activities in either country.

But shortly after, while addressing locals at Kyonyo in Katuna town council and Kabale-Katuna roundabout in Kabale town, Museveni said Uganda will only hand over Rwandans arrested for minor crimes but not those arrested for capital offences such as murder, rape and espionage.

Museveni further said that he felt sorry for citizens in both countries who are suffering because of the closed border. In a tweet, Museveni urged the nationals to be patient saying the "truth" will eventually come out because his "NRM government stands for the truth." Since the closure of the border, several Rwandan and Ugandan nationals who attempted to cross into and out of Rwanda through the porous borders have been shot dead by Rwandan security forces. There has been a reported spike in prices and shortage of goods in Rwanda since the border closure.

Museveni also distanced Uganda from having any links with Gen Faustin Kayumba Nyamwasa, the leader of Rwanda National Congress (RNC) that is plotting to overthrow Kagame's government.

Rwanda has consistently accused Uganda of hosting dissidents especially from the RNC and the Democratic Forces for the Liberation of Rwanda, who have declared war on the Kagame-administration. But Museveni stated that he, and the Ugandan government, have no relations with Nyamwasa and his allies and neither is he interested in their conflicts with Kagame.

Museveni said that all he knows is that Nyamwasa fell out with Kagame and fled to South Africa for asylum. He added that he was not aware if Nyamwasa and his allies are passing through Uganda to destabilize Rwanda.

Among the Katuna/Gatuna summit resolutions Uganda is supposed to investigate Rwanda's allegations of harbouring and facilitating dissidents within 30 days and then thereafter the border could be reopened within 15 days. Uganda accuses Rwanda of infiltrating its security agencies including the police, army and intelligence to carry out espionage activities.

S. Sudanese Kiir/Machar had no choice but to finally work together because they are both S. Sudanese!

Why are Ugandans keeping Museveni in power through the tribalistic system that gives him legitimacy to use Uganda as base to fight his brother Kagame?

In what state will Museveni leave Uganda & Ugandans finally & what's wrong with Ugandans?
Report to administrator
+4 #2 miki 2020-02-23 20:53
Does Rwanda need to send spies to Uganda for any information it needs??

President Museveni wants us to think so. But this is not true. He himself made sure that all the critical positions in security organisations and in the public service were filled by Rwandese (and some by Banyarwanda who are as Ugandan as anybody else). This is a fact.

Some of the Rwandese went back to Rwanda after their war of return, but many stayed behind in Uganda. Many of these Rwandese nationals and their children have been educated on state house sponsorship, they have some of the most influencial jobs, are rich and everywhere as perhaps Mr. Museveni intended it on coming to power in 1986.

Many of them, though not all, are good sources for whatever information that Rwanda may want. Many of them even enjoy better rights, legal protections and benefits than many Ugandans.

For example Ugandans who have tried to get a passport can attest to this. Many Rwandese have Ugandan passports ala Ms. Mukankusi.
Report to administrator
+3 #3 Lysol 2020-02-24 00:23
The cat and mouse game is being played by the two sides.
Well,who is the cat and who is the mouse here? In the end one of them will be eaten.

The Pencil Man seems to know how to play the game better, while the hat wearing old man seems to be clueless and disrespectful

He should learn the protocol of moving his silly hat when meeting his counterparts. It's disrespectful in many culture to keep your hat on when shaking hands.

The body language says it all. From Addis Ababa, when they stood far apart from each other, during the photo-op to that distance handshaking. .

Kagame knows all of Museveni's dirty tricks as a former intelligence officer of the NRA. He has always had his men infiltrating all of the M7 militias groups. Not to mention that angry little man Gestapo KK who was heading the police. .
Report to administrator
+1 #4 miki 2020-02-24 01:39
Mr. Kagame ate Mr. Museveni's lunch. Yet again. Broken, humiliated and bested by Kagame at that black summit at Gatuna. (who the hell chose that pathetic color for the draping in the conference tent?), now Mr. Museveni is belatedly trying to mobilize Ugandans so that they start seeing it as a nationalistic issue.

Mr. Kagame seems to have left Mr. Museveni at the starting blocks even regarding this. Many Ugandans still view this as a personal ego contest between Mr. Museveni and Mr. Kagame.

As bad as it may seem, many Ugandans are even slapping their backside in joy on seeing Mr. Museveni being humiliated by somebody.

This is what is likely to remain Mr. Museveni's problem going forward. Both men may be under pressure to have the border issue resolved. But Mr. Museveni is under more pressure than Mr. Kagame.
Report to administrator
+3 #5 R Katumba 2020-02-24 08:47
Much as we are tired of Museveni, Kagame's ruthlessness is beyond imagination. For those who don't know please read https://www.theguardian.com/news/2019/jan/15/rwanda-who-killed-patrick-karegeya-exiled-spy-chief or https://www.bbc.co.uk/news/10479882

He has murdered his political opponents both home and abroad and gloated about it.

Museveni has not done so. He has covered his deeds by pretending to revive the economy and deceptively modernising Kigali yet Rwandese are alot poorer than Ugandans http://worldpopulationreview.com/countries/median-income-by-country/.

Militarily they are both very strong and so no one can be foolish enough to fight them but neither can the sham elections they organise.

Only Gods intervention will save us from these two brotherly dictators who have fallen out
Report to administrator
+1 #6 Kalibbala 2020-02-24 19:50
#miki #Lysol..Spot On..There is Nothing To Spy in Uganda by Rwandese who are even heading the Almighty's SFB...it is like being eaten Up by Cancer and you keep deceiving yourself that it is Flu...at the End You Die of Multiple Organ Failure..

The Pencil Man seems to know how to play the game better, while the hat wearing old man seems to be clueless and disrespectful

He should learn the protocol of moving his silly hat when meeting his counterparts. It's disrespectful in many culture to keep your hat on when shaking hands. ...

Kagame knows all of Museveni's dirty tricks as a former intelligence officer of the NRA. He has always had his men infiltrating all of the M7 militias groups. Not to mention that angry little man Gestapo KK who was heading the police. .

Lysol, "Our Problem of Africa" is a total Maalo. He has no clue about social antiquate, especially the Hat culture. He even puts it on in church.

He dresses, sits, eats and drinks badly especially in the presence of VIP guests.

In other words, it is a national embarrassment. The guy has no clue about Place, Time and Occasion (PTO) antiquate.
Report to administrator
0 #8 Lakwena 2020-02-26 08:08
But "Our Problem of African " also with his lies and deception!

What about the 13 Banyarwanda whom his Muko, Sam Kuteesa handed over to the Rwandese authority, before the Katuna No Man's Land Summit: were they pickpockets?
Report to administrator