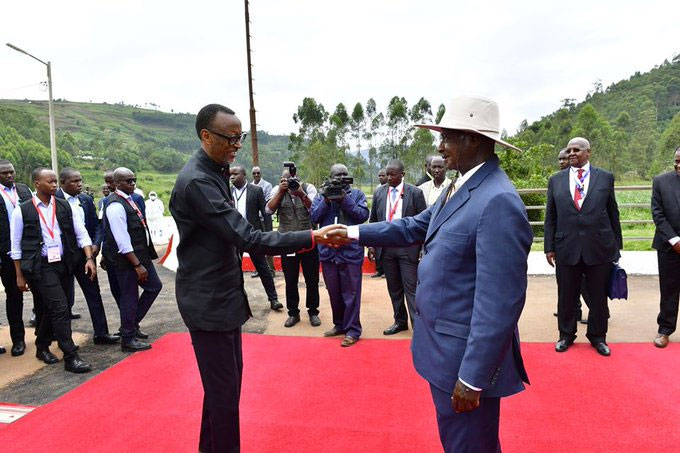 President Paul Kagame and Yoweri Museveni at the Gatuna/Katuna border

The Rwanda-Uganda border will not be reopened until at least after 45 days when Uganda has taken steps and effort to verify Rwanda’s allegation that it is harbouring dissidents plotting to overthrow President Paul Kagame.

Since February 2019, Rwanda closed its borders with Uganda and also blocked its citizens from crossing over claiming it can't guarantee their safety while in Uganda. Several people from either country have been shot dead by Rwandan security forces while crossing in or out of Rwanda since the border closure.

Uganda President Yoweri Museveni and Kagame of Rwanda today met at the Katuna/Gatuna border for the fourth quadripartite summit seeking to resolve the diplomatic tensions between the two countries.

In the final communique released to the press, Museveni and Kagame signed also extradition treaty which constitutes the legal framework to handle cases of justice including nationals engaged in subversive activities in either country.

But even more crucially, the summit recommended that Uganda must verify within a month, Rwanda’s allegations of harbouring and facilitating dissidents hostile to President Kagame’s government.

And, that if the allegations are proved to be true, Uganda has been tasked to put in place all measures to put this to an immediate stop. Once these actions have been fulfilled and confirmed by the Ad-Hoc Ministerial Commissioner for the implementation of the Memorandum of Understanding of Luanda, the communique says then the Gatuna/Katuna border shall be reopened within 15 days and normal relations restored.

The summit was also attended by Angola President Joåo Manuel Gonçalves LOURENÇO and Democratic Republic of Congo President Félix Antoine Tshisekedi. Last week while addressing government officials, Kagame said Uganda wrongly believed that Rwandans would starve and come begging for the reopening of the border but instead it made Rwanda self reflect and starting manufacturing or importing from elsewhere goods that were coming from Uganda.

Its extremely amusing to watch a rat slowly chewing at old cat`s skin.

Even the dress-code tells its own story . Poor Muse is all dressed up to impress ; but arrogant Kaga turns up easy to as if to say : you are not The Big Deal anymore

Museveni should learn to respect those he calls "little chaps" from our other district. The vindictive Museveni never forgets the humiliation of Kisangani.

He stills wants a payback. Rember, all those leaders who trusted him, like Bashir, Mugabe, Gaddafi, and Kabila are all gone.

Kagame, should always watch his back. He may be next. Museveni has always worked for some foreign intelligent networks, since his days in TZ as a so-called student. .

On another note, his stand-off with Kagame mean no more smuggled DRC's gold to the new refinery in Entebbe. That hurts his corrupt regime financially to remain in power for life. This means war as the last options.
Report to administrator
+2 #3 miki 2020-02-22 06:03
Pictures, they say, can speak a thousand words. And so was the case during the recently concluded summit of the presidents Katuna/Gatuna border.

For starters was the images of a seemingly agitated President Museveni chilling off together with President Tshisikedi of Congo as they were made to wait for the arrival of Rwanda's President Kagame.

Then there is what was made to show the grand arrival of the casually dressed Kagame strutting forward with a spring in his step as he strode forward to meet Museveni, the latter cluching a folder of papers in his right hand and keeping the left hand buried in his coat pocket as if to make both of them unavailable for a hand-shake.

As if sensing the gesture, Kagame himself seems to burry his left hand is a trouser pocket leaving available only the right hand which in any case would not allow a natural handshake with Museveni's left hand.

There appears to be some tactile contact, though not a handshake. A fist bump may be? What a prelude?
Report to administrator
+2 #4 miki 2020-02-22 06:26
Then came the summit itself! Goodness.

A Glum faced Mr. Museveni, face and the hairless pate glistening in the tv lights, sitting stiffly and slighly askew in that chair as if it is a throne of thorns on one side - motionless except for the incessant twirling of the thumb against the index and middle fingers of the right hand as if he is 'kuyenga kabombo'.

Call it tablet rolling by a man who would rather be some place else. At the other side of the table, Kagame appears relaxed and even enjoying flipping through the papers in the folder before him as both men listen to what appears a litany of concessions to the Rwandese demands by the Ugandan side against little or nothing from the Rwandese side.

Mr. Museveni cuts a dejected figure and almost looks angry as the two ministers perform what really appears to be a perfunctory signing of the communique ending the summit. it is no wonder that Mr. Museveni is the first one to spring to his feet when the end is announced! Wow!
Report to administrator
+3 #5 miki 2020-02-22 06:41
Mr. Museveni, ever the one humiliating other people, has never been given so big a dose of own medicine.

And now with Rwanda seemingly clutching a bottomless bad of demands who knows what will happen?

Kagame knows he has the upper hand in this against the aging and visibly tired Museveni. Rwanda also has a leg up due to the level of intelligence infilitration of Uganda's security apparatus given the seeming accuracy of Kagame's demands.

And Kagame who has excelled in couching his demands in what seems nationalistic and patriotic dogma appears to have the majority of Rwandese on his side.

On the other hand many Ugandans continue to see this as a personal problem between Museveni and Kagame.

Museveni went to Katuna with no nationalistic or even patriotic fervor bouying his entourage. In fact there are many Ugandans who are happy to see Mr. Museveni being humiliated at the hands of somebody - anybody. who believes this last summit with amount to anything soon? Not me.
Report to administrator
+1 #6 Kalibbala 2020-02-22 22:27
Good timing..PK..you are the only One who knows this Snake better..Remember the Peace Jokes of Nairobi?

He mocked the Okellos while Continuing to Kill them..He Called Gallant Rwandese Soldiers "Chaps"..These risked their lives to Bring him to Power...As Almighty Ruling Uganda for Life He has No Case To Answer...You Saw the Guns guarding Him..!

All Ugandans are Now Crying Paulo Tuzaale!!We are Tired of the Hyena..Close that Border for Good..let them Feel it..use Tanga..or Dar-es Salaam.
Report to administrator
0 #7 Kabayekka 2020-02-22 23:38
Exactly why does not the Uganda Army demand back its military hardware that these Rwanda liberators stole to capture power in Rwanda?

These silly talks should not be going on at the high cost of the tax-payers of Rwanda and Uganda? It is unfair indeed.
Report to administrator