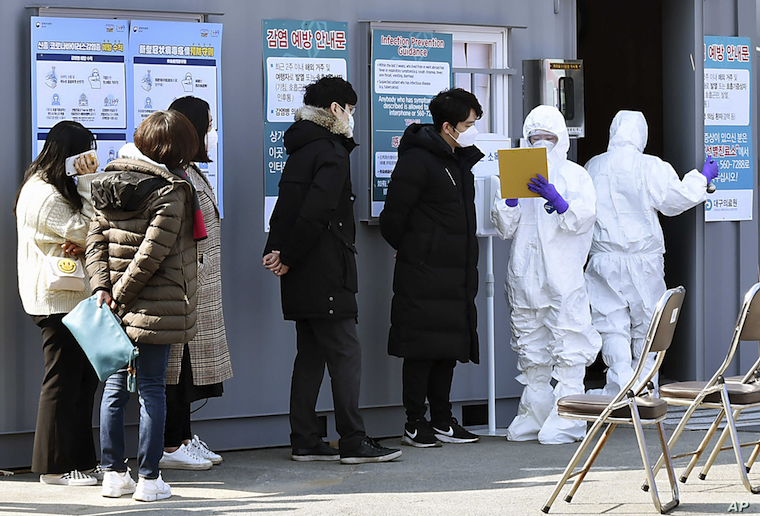 People suspected of being infected with the new coronavirus wait to receive tests at a medical center in Daegu, South Korea, Feb. 20, 2020

South Korea confirmed its first death from the new coronavirus, local media reported Thursday, as the number of infections in the country tripled within two days.

The Korea Center for Disease Control and Prevention said in a statement the exact cause of death is being investigated. The report came as the country grapples with the outbreak and its economic impact. South Korea reported 53 new coronavirus infections Thursday, bringing the total number of cases in the country to 104.

South Korean authorities have warned the outbreak is entering a “new phase” and is now spreading locally, even among people who have no links to China, where the virus originated.

The virus, which causes a pneumonialike illness recently named COVID-19, has killed more than 2,100 people and infected more than 75,000 worldwide. Almost all the infections have been in China.

Almost all of the latest South Korean coronavirus infections were in Daegu, the country’s fourth-largest city. Many were linked to a religious group called the Shincheonji Church of Jesus the Temple of the Tabernacle of the Testimony, which was founded in 1984 by Lee Man-hee, who is revered by his followers as a messiah.

Daegu’s mayor has cautioned residents to stay inside their homes to prevent a further outbreak.

There are fears that the new coronavirus “has spread deep within Korea undetected,” said an editorial in the Chosun Ilbo, a major South Korean newspaper.

“Existing measures to deal with the outbreak are not working,” it continued.

Moody’s also said China is now expected to experience 5.2% growth in 2020, down from an earlier estimate of 5.8%. Economic turmoil in China is acutely felt in South Korea, because Beijing is Seoul’s top trading partner.

Some South Korean automakers, including Hyundai and Kia, temporarily halted or reduced production because of a shortage of parts from China, where many factories have closed.

South Korean President Moon Jae-in said Tuesday that the situation is “more serious than we thought,” adding that “emergency steps” are needed to contain the economic fallout.

US military on alert

The US military, which has more than 28,000 troops in South Korea, has implemented precautionary measures to prevent the spread of the virus.

The latest outbreak in Daegu, about a three-hour drive south of Seoul, is especially worrying as the United States has thousands of troops in the area.

All nonessential travel to and from Daegu has been banned, and travel outside US bases has been minimized, according to General Robert Abrams, the commander of US Forces Korea.

The US military has also implemented a “mandatory self-quarantine” for any service members who visited the Daegu religious group, where many of the latest infections were reported.

-1 #1 WADADA rogers 2020-02-20 21:30
the syndicate is working well, i think that virus is intended for people with Asian blood
Report to administrator
+4 #2 Lysol 2020-02-20 22:26
Why don't you guys report on the fate of the Ugandans students and others who are abandoned by the corrupt regime? Instead of diverting our attentions to other countries coronavirus crises.

Uganda is yet to come out openly on the issue. Just a matter of time.

The corrupt regime is trying to cover-up, like with many casualties Uganda has suffered abroad.. Money which the regime always pays the next of kin of the victims. cannot be compared to life.
Report to administrator
+3 #3 Lysol 2020-02-22 22:31
With information from China scarce, U.S. spies enlisted to track coronavirus
African leaders who left their citizens behind to die might have been fooled by the Chinese authorities.
Report to administrator