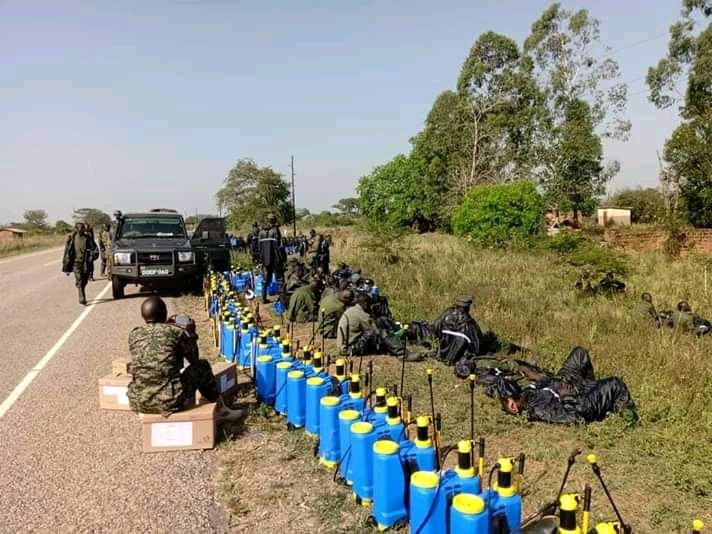 Government has acquired two aircraft and chemicals to roll back the desert locusts’ invasion.

The migratory pests were first sighted in the country on February 9, after crossing from Kenya through Amudat district in the northeastern Karamoja sub-region. They later spread to the districts of Amudat, Abim, Kaabong, Nakapiripirit, Agago, Katakwi, Nabilatuk, Kitgum, Karenga, Kumi, Ngora, Soroti and Amuria, among others.

The government deployment soldiers to manually spray the locusts using hand-held sprays. But State Minister for Animal Industry Bright Rwamirama says the aircraft for aerial spray was cleared yesterday and will be stationed in Moroto district.

Another aircraft has been hired for backup. Speaking to journalists at the Uganda Media Centre in Kampala, the minister said government has also procured Fenitrothion, the chemical recommended to spray locusts, and this is expected to be in the country within three days. According to Rwamirama, all is now set for the fight.

He maintained that although experts have said this is the worst desert locust outbreak in decades for many countries in the Horn of Africa, the locusts in Uganda have not been so harmful. He, however, cautions that they could be laying eggs that will result into hopers that are very dangerous.

Rwamirama also assured the public that the pesticides used for ground and aerial spraying are bio degradable and leave the soils and plants in about seven days without causing any harm.

One thousand UPDF soldiers have also been trained in ground spraying and army helicopters are being used to survey and pinpoint where locusts are and are laying eggs, which helps in aerial spraying.

The government has so far allocated Shs 22 billion towards the Desert Locust Control Plan with Shs 11.1 billion going to the Desert Locust Organisation (a regional body, which was formed to fight desert locusts). Shs 3.6 billion is for aircraft leasing, Shs 0.3 billion for UPDF operations and Shs 7 billion for chemicals, logistics, protective gear, pumps and surveillance.

To date, the swarms which were reported earlier in Ethiopia, Kenya and Somalia, have spread to a total of seven countries, including Djibouti, Eritrea and Tanzania. As the situation continues to deteriorate, the Food and Agriculture Organisation warns that there’s a growing risk the pests could migrate to more neighbouring countries.

FAO’s Desert Locust Information Service says the situation is extremely alarming and will be further exacerbated by new infestations expected in early April of this year.

A new generation of locusts is expected to hatch this month and with new swarms expected in early April that would coincide with the next season of planting. At that time, the seasonal winds will have shifted to the north, which is likely to allow the newly formed swarms in Kenya to reinvade Ethiopia and Somalia as well, as to migrate to new areas of South Sudan and Sudan.

But Rwamirama says the situation is now under control in Uganda, and that there could be less breeding by the locusts. He also downplayed requests for accountability for monies spent thus far, saying that asking the government to account in the middle of an operation is diversionary.

The Food and Agriculture Organization representative in Uganda, Antonio Querido, says there is no need for panic as a number of countries are dealing with the same issues. He says the locusts may reach Uganda on a very transitory passage.

These chemicals are going to end up in water sources, and when used to spray locusts, they will kill other insects such as beens, we shall also loose birds and human beings for eating these locusts with chemicals sprayed on them.