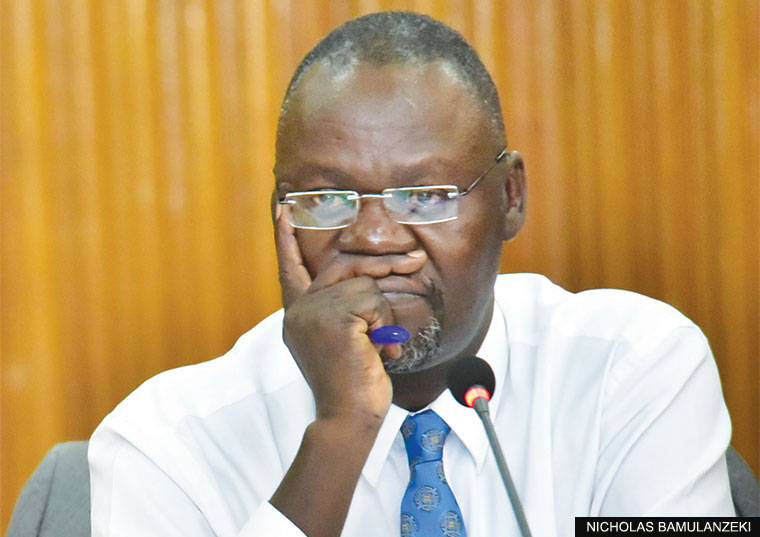 The High court has trashed the 2017 findings and recommendations of the parliamentary committee on the Shs 6 billion presidential handshake.
The parliamentary committee on Commissions, Statutory Authorities and State Enterprises (Cosase) in 2017 then led by Bugweri MP Abdu Katuntu, recommended that people who benefited from the Shs 6 billion 'presidential oil handshake' refund the money and be investigated by the Inspector General of Government (IGG) with the view of finding culpability and possible offenses.

However, justice Andrew Bashaija ruled on Friday ruled that the recommendations of the committee were illegal and said the orders of the committee "be removed from public orders and should not be implemented."

Bashaija said he didn't find anything wrong with the officials who received the money. The case was taken to court in 2017 by Ali Ssekatawa, who received over Shs 200 million from 'the handshake.'

Ssekatawa petitioned against parliament’s role in questioning the presidential donation to the team that worked on the oil case which they argue earned Uganda millions of dollars.

Ssekatawa, who is now the legal officer at the Petroleum Authority of Uganda, was an employee of Uganda Revenue Authority at the time.

This ruling is a win for people who received the money but also raises more questions among Ugandans on whether public officials paid using taxpayers' money should be receiving more money as ‘handshake’ for doing their work.

The money was given to government officials following a court victory against the oil company, Heritage in London in 2015. Here, the United Nations Commission on International Trade Law (UNCITRAL) dismissed a case filed by Heritage, which had challenged a decision by URA to collect Shs 1.1 trillion capital gains tax. This was after Heritage sold its stake to Tullow Oil.

The court directed Heritage to pay Shs 11.5 billion in costs to Uganda. Armed with this victory, the officials asked President Museveni to pay them some of the awarded money as a token, which came to be famously known as the “oil handshake”.

Other people who received the money include former URA commissioner general Allen Kagina, who is now the head of Uganda National Roads Authority (UNRA).

The ruling, which renders useless the 95-page report by Cosase, prohibits the implementation of the findings and awards costs to the applicant, Ssekatawa.

Among other things, the committee had recommended that the beneficiaries refund the money, that they be held accountable for flouting laws to solicit a donation from the president and that a bill be introduced to review presidential donations.

Justice Basahija adds that none of the recommendations should be implemented.

+2 #1 Concerned Ugandan 2020-02-17 09:02
No surprise here! Even the Chief Government Pleader aka Attorney General benefited from that fiasco.

How then could the Attorney General competently defend a matter in which his own people were also beneficiaries?!
Report to administrator
+2 #2 WADADA rogers 2020-02-17 09:50
But what did you expect from Justice Andrew Bashaija, ruling otherwise would be an indictment on the President who was the architect of the handshake
Report to administrator
+2 #3 Kabayekka 2020-02-17 09:58
Indeed it is a win for the President who has made it a habit of giving tax payers' money until he drops dead.
Report to administrator
+4 #4 Zaitun 2020-02-17 10:45
"justice Andrew Bashaija ruled on Friday ruled that the recommendations of the committee were illegal and said the orders of the committee "be removed from public orders and should not be implemented."

The name says it all. Ugandans are to be milked to death. You are as corrupt as your brother who controls every life in Uganda.

Today, we have nothing to breath but corruption; every aspect of Ugandan life smells corruption.

Thank you dear Museveni and clansmen for making Uganda the source of corruption in the world!
Report to administrator
+2 #5 Lakwena 2020-02-17 14:12
In other words, there is nothing wrong with Mr. M7 and cabal, ripping off Ugandans in broad-day-light.

Cry the beloved country!
Report to administrator
+2 #6 Remase 2020-02-17 14:49
Fellow Ugandans, we under a state capture! We have no say on how our taxpayers money is spent and/or given/shared.

It\s M7, his cronies and the judicially is there to make certain that the looting is legal. That why M7 claims that he is not corrupt! If M7 is not corrupt, then who is?

Corruption and M7 are inseparable and it\s in his DNA. M7 has lived corruption all his life and will never survive without it. Corruption is M7 and M7 is Corruption, in other words, Corruption is M7's surname
Report to administrator
+1 #7 Miko 2020-02-17 15:12
I will declare my lack of a detailed knowledge of the case and the basis for the judgement at the outset. What I will say is that I think that this is a case, if ever there was one, that requires the decision to be tested in an appellate court.

There is a glaring public interest aspect to this case that needs to be looked at closely. Otherwise, a precedent will be set for other people to seek to get a "handshake" for doing what they are ordinarily paid to do and/or the incumbent making payments to favoured persons under the guise of rewarding them for a job well done, using public funds and effectively circumventing parliamentary scrutiny.

The intended and unintended consequences of allowing this judgement to stand are immeasurable and its echoes could ring for years to come.
Report to administrator
+6 #8 Budapest 2020-02-19 12:08
Of course, the usual charlatans will make a meal out of this court judgment. If only we could look at the case itself and the basis of this court decision.

It is not unusual to reward employees and/or associates for work well done, especially when it's beyond their job description, anywhere in the world, or even in our own smaller entities and corporations.

Now to the case itself, URA and its top people were advised against pursuing this case in London because chances of getting a favorable judgement were very slim. They, however, insisted, even to the president that they should try and see what the London court says.

And indeed they got a judgement in their favour, a very rare case for an African institution against a global oil powerhouse that is Heritage Oil. A different judgment would have cost us 1.1trillion UGX.

The 6bn was part of the 11bn that the court awarded as costs of the suit.

Again, much ado about nothing.
Report to administrator