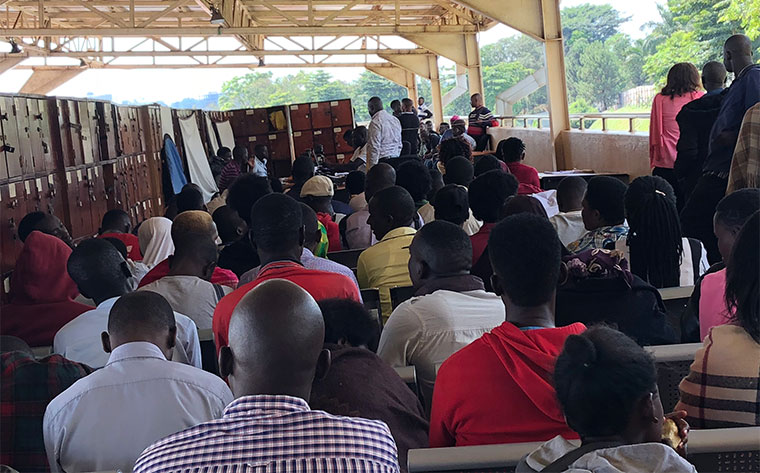 Applicants waiting to have their pictures taken at NIRA

The surging crowds at National Identification and Registration Authority (NIRA) offices in Kololo are symptomatic of the inefficiency of the agency, minister of Internal Affairs Gen Jeje Odongo has said.

Odongo said this while presiding over the inauguration of the new NIRA governing board that took oath on Thursday. He said there are many challenges facing the authority that has put the whole institution into disrepute.

According to Odongo there is a continuous outcry from the citizens about the services offered by the authority and urged the new board to immediately find solutions to the challenges it is currently facing.

“I encourage you to apply your mind to the improvement of the services as quickly as possible,” he said.

"Many of you are coming out from the public and even those of you representing the institution, you must be hearing the continuous cry of services offered by NIRA. As you came in, you saw those crowds, for example, that is symptomatic of a challenge which we're facing. So I would like to encourage you to apply your mind to the improvement of business processes so as to enable for example the turnaround. If I apply for a national ID, how long should wait before I receive it." he added.

Most of the challenges affecting the authority include inadequate equipment, poor coordination between NIRA staff and the district coordination committee members. Other challenges are limited facilitation, limited office accommodation, unbalanced and unfavourable payment structures, inadequate understanding of NIRA activities and services by the local communities, and a considerable disparity between the approved budget and the overall performance of the project.

NIRA has an established staff structure of five staff in every district office. However, the 2019 report of the parliamentary sectoral committee on Defence and Internal Affairs on the petition and oversight visits on operations of NIRA show that some districts have got only two or one staff manning the entire process. This, according to the parliamentary report, has strained on the posted officers leading to failure to achieve the set targets.

“The workload has caused a strain on the existing staff who have to work extra hours to meet the needs of the public. The committee was informed that some officers serve two districts; a case in point was the Gulu office that serves both Gulu and Omoro districts,” reads the report in part.

Parliament last year observed that NIRA head office faces a serious problem of understaffing and in most cases staff were performing more than one job, hence, affecting the efficient and effective service delivery.

NIRA currently has only 123 out of the growing number of districts approved service points across the country and 5 for the 5 Kampala divisions. These service points are constant regardless of the increase in the number of districts. Odongo also urged the new NIRA board to establish mechanisms for which NIRA can back all its information to mitigate any eventuality of data loss.

"One of the challenges that NIRA as an institution faces that I would like you to address yourselves to in course of your tenure, is that NIRA houses very sensitive information. If we were struck with a disaster, we’d lose that information but we shouldn’t do that. I would like to encourage you to fight tooth and nail to create a disaster recovery centre." said Odongo.

Judy Obitre-Gama, NIRA executive director says the authority currently has staffing levels of up to just 50 per cent and hopes to fill in the balance next year upon approval of the wage bill by government.

With a population of 40 million Ugandans, NIRA says they have only been able to register close to 29 million people. But Odongo says even with the registered population, there a sizeable number of those are non-citizens. Government proposes to introduce citizen verification committees for processing a national ID to prevent non-Ugandans from accessing the cards.

“As of now, it is the letter of the LC1, a recommendation from the DISO, to determine that one is a citizen,” says Odongo.

The board has also been tasked to devise means of standardizing LC 1 letters introducing citizens for national identity cards. James Biribonwa, a former commissioner of the Electoral Commission is the new board chairperson and will be deputized by Ruth Nvumetta Kavuma, a representative from the members of the public on the board.

NIRA, has for nearly a year, been operating without a functional board, following the resignation of Prof Peter Kasenene in March 2018. Kasenene said he had resigned for health reasons.

Others on the board are; James Saaka, representing the National Information Technology Authority (NITA-U). He is also NITA-U’s executive director. Also on the board is Bemanya Twebaze, Uganda's registrar general and chief executive officer of the Uganda Registration Services Bureau (URSB).

Meanwhile, Dr Paul Kintu will be representing the ministry of Internal Affairs, while Dr Chris Ndatira Mukiza, is the new representative of the Uganda Bureau of Statistics (UBOS) on the board. Dr Ndatira is the UBOS executive director.

On the board also is Maj Gen Apollo Gowa Kasiita, the commissioner for Citizenship and Passport Control and Dr Betty Kivumbi Nanyonga, also a representative on the board from the public. Dr Nanyonga is a senior mathematics don, at Makerere University College of Natural Sciences.

Biribonwa regretted the challenges faced by Ugandans who are in need of services at the authority.

In other words, with inadequate staff, no money , no equipment, no offices, no this no that; the General is actually on his knees.

Except causing suffering: loss of time and money by Ugandans; with such inefficiency, what objectives has the National ID worry hurry done?

If e.g., Face Technology, the company contracted by the same government to issue Driver's License/Permit, can issue the damn similar piece of plastic thing in less than 2 days after one has completed the procedures; what bewitches NIIRA from doing the same thing?
Report to administrator
+2 #3 WADADA rogers 2020-02-17 09:53
Anything that involves long queues is a sign of primitivity, it is part of the usual bureaucracy so that some people can take bribes
Report to administrator