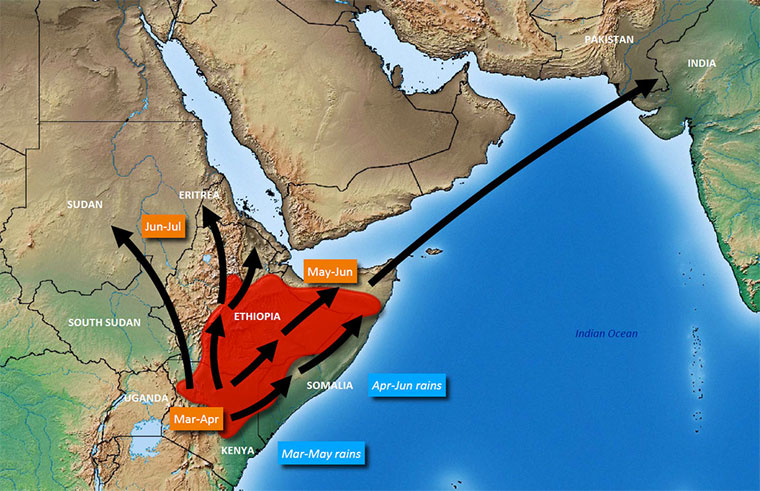 Countries in the Horn of Africa are in a race against time to tackle a desert locust invasion amidst ongoing humanitarian challenges, the United Nations has warned.

The observation came just a day after swarms crossed into Uganda, through the northeastern districts of Amudat and Nakapiripirit from neighbouring Kenya. The infestation in Uganda also puts Tanzania and South Sudan on the watch list, according to Mark Lowcock, the UN Emergency Relief Coordinator.

“In this region where there is so much suffering and so much vulnerability and fragility, we simply cannot afford another major shock. And that’s why we need to act quickly,” Mark Lowcock added, shortly before addressing ambassadors at the UN headquarters in New York.

He said the infestation in Kenya is the worst in 70 years, while Somalia and Ethiopia are experiencing their worst outbreaks in 25 years, putting crop production, food security and millions of lives at risk.

He said,  “We do have a chance to nip this problem in the bud, but that’s not what we’re doing at the moment. We’re running out of time.”

Lowcock advised agencies and countries intending to support efforts against the migratory pests, not to think for so long. The locust threat comes as the region is recovering from what Lowcock described as recent “back-to-back shocks” which have undermined resilience, with some 19 million people at risk of experiencing severe food insecurity.

An average swarm, which contains up to 40 million insects, can travel up to 150km in a single day and can devour enough food to feed 34 million people within that time. Somalia and Sudan faced a famine threat in 2017, but communities have also weathered poor rains, drought and floods in the past two years.

“It is these weather events which are creating the environment to facilitate the current locust outbreak,” Lowcock explained.

He added that unusually heavy rains and increase in the frequency in cyclones in the Indian Ocean have created favourable conditions for the locusts to breed. The UN Food and Agriculture Organization (FAO) recently launched a $76 million appeal to control the locusts’ spread. So far, only around $20 million has been received; roughly half of which came from a UN emergency fund.

“Without rapid action, we will be facing a rapidly expanding humanitarian crisis. The desert locust swarms are growing exponentially,” FAO director-general Qu Dongyu warned in a video message.

Lowcock, also underscored the urgent need for action, particularly as the rainy season begins in March.

“I’m calling on the countries concerned, the international community, the donors, to step up and to step up now,” he said.  “There is a risk of a catastrophe. Perhaps we can prevent it; we have an obligation to try. Unless we act now, we’re unlikely to do so.”

In Abim, the locusts landed on Alerek rock in Alerek sub-county but were seen flying through Abim sub-county to Magamaga sub-county around 5:00pm. In Katakwi district, a swarm of locusts crossed Soroti- Moroto highway, about five kilometers from Katakwi town at 7:03pm.

Nelson Olwit, the Principal assistant secretary in Abim said the district is doing surveillance on the movement of the locusts. He noted that no team of experts to spray the locusts had arrived in the district then.

The desert locusts invaded the Karamoja sub-region on Sunday evening through Amudat district. The first swarm came from West Pokot through Kosike in Karita sub-county and flew towards Nakapiripirit and Nabilatuk areas. Another swarm came from Turkana county, Loima district in Kenya to Nakabaat in Rupa sub-county.

Dr Francis Inangolet, the district production and marketing officer of Moroto, says the insects were still in Rupa sub-county as other sub-counties had not yet reported the invasion.

He noted that the insects for now only feed on shrubs since most of the crops were harvested last year. On Monday, government airlifted pesticides for spraying desert locusts in Karamoja. Uganda last had desert locusts in the late 1960s and the current invasion is linked to climate change. According to IGAD, one swarm of locusts measures 60 kilometers long by 40 kilometers wide.

A typical desert locust swarm can contain up to 150 million locusts per square kilometre. UN reports indicate that locusts can reproduce rapidly and, if left unchecked, current numbers could grow 500 times by June. A swarm can destroy as much food crops in a day as is sufficient to feed 2,500 people.

0 #1 Kabayekka 2020-02-12 08:42
One believes there are birds and small animals that feed on the regeneration cycle of these locust. Unfortunately these killers have been destroyed over time.

The UN has all along been having a nice holiday over this environmental programme.

It is very unfortunate that the UN is now coming out to tell Uganda to quickly sort out this problem. As explained well, Uganda is in the grip of another African dictatorship that is spending the country's budget on military adventures.
Quote | Report to administrator
+1 #2 WADADA rogers 2020-02-12 11:14
They are waiting to be told what they ought to do. Our leaders act sluggishly so that they can take advantage of the situation to swindle money set aside for fighting the insects.

I hear they are awaiting the bigger swam before they can start spraying. imagine we were warned in November last year that locusts were coming, to date we have done nothing to deal with the locusts, they have now spread to to more than 15 districts, so sad.

Any attempts to spray now will kill the birds and the humans who will try to eat the locusts
Quote | Report to administrator
+1 #3 joe paomo 2020-02-12 11:41
This is the real work of IGAD and that is why it was formed
Quote | Report to administrator
+2 #4 Lakwena 2020-02-12 15:34
According to Dr. Spire Ssentongo's Cartoon; this is a losing battle because the Locust have figured out that we are corrupt.

In other words the pesticide procured most of it will be stolen. Hence their safety and feasting is guaranteed.
Quote | Report to administrator
+2 #5 rubangakene 2020-02-12 22:53
What can all these thick people in government do,eh?None has a clue of what to do, to be honest.

You see them always attending conferences in five-star hotels with their bottled water and allowance claim forms in their suit pockets. HAWA NI KAZI BUURE TUU! At this time they will be running around like dogs trying to scratch parts that their paws can't reach.
Quote | Report to administrator
Refresh comments list
RSS feed for comments to this post
Add comment