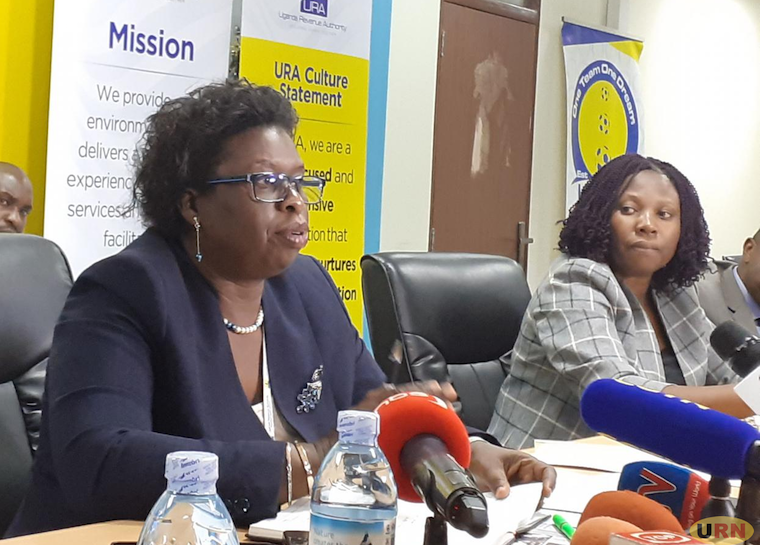 Uganda Revenue Authority (URA) collections for the six months from July to December 2019 fell short of the target by at least Shs 697.4 billion.

Doris Akol, the commissioner-general, told reporters on Thursday at URA headquarters in Nakawa that the tax body managed to collect Shs 9 trillion from July against the target of Shs 9.7 trillion

This, however, means the revenues collected have grown by 11.2% compared to the same period in 2018/2019 financial year. The less than expected revenues is bad news to the government as it means it will not be able to implement some of the priorities planned for the 2019/2020 financial year. More so when the money from the donors is dwindling.

Government has indicated it will be forced to borrow up to Shs 2.4 trillion from commercial banks to plug the revenue shortfall gap. The International Monetary Fund (IMF) in its latest assessment of the economy has cut Uganda’s growth projection for this year, citing partly government’s inability to collect more revenues to implement some of the budgeted projects.

Meanwhile, on domestic tax, the shortfall was much higher, with Akol blaming this on the fact the measures passed in the budget to help revenue collections have not been implemented. In this area, the tax body failed to collect at least Shs 436 billion.

The measures include the digital tax stamps whose start was delayed by court battles from manufacturers that didn’t want to affix stamps on their products, claiming it increases cost on their work.

Also, Akol said Value Added Tax (VAT), which is paid at every stage of production or distribution fell sharply. This is because manufacturers produced less or sold less. For instance, sugar and beer saw less contribution in this area. The sugar manufacturers were affected by refusal of Tanzania to take Uganda’s sugar. Wholesalers and retailers also paid less VAT.

Some of the taxes were not realized because of the changing preferences of Ugandans. For instance, Ugandans used their social media accounts to send each other messages instead of calling. This has reduced tax collected on the phone talk time to the tune of Shs 92 billion.

The international tax, which is got from import taxes was suppressed too. Ugandans imported less than was expected - leading to a shortfall of Shs 83 billion on imports. Ugandans also consumed less fuel than expected.

Akol said instead of importing, Ugandans are resorting to the locally made substitutes like cement, tiles, steel products, detergents, cooking oil, and biscuits among others.

URA has been infected with Kawukuumi losely disguised as "born-again" , The truth is that the URA empolyees that are mostly selected by the so called first family have begun pocketing most of the taxes they collect directly from the business sector.

Akol knows who they are , but can`t do anything because she is Akol.

Every one in Kampala knows that URA people are the are all tycoons.

And .. its false to claim that people stopped talking ( buying air-time) and switched to sending SMS instead.

The truth is that people have discovered that if they can access a location with Wi-Fi connection , they hang around , talk , down load stuff without having to buy air.data.

There is a Hotel right here in Kampala where recetionists sell Wi-Fi to non.residents or non clients,
Report to administrator
0 #2 Lysol 2020-02-09 01:25
Really/ They hide the rest of the money always.

There used to be an URA agent who used to hide a sack of money under his bed/pillow at night after work. Many of them get killed.
Report to administrator
0 #3 sula 2020-02-09 09:49
1- So many years after all the praises from his friends ,fortune hunters ,IMF and World Bank , when Rawlings was forced to hand over the govt , the first statement from new President Kuffor was that the country's economy had collapsed.

2- The Ugandan economy collapsed so many years ago, but the cabal,fortune hunters,IMF, World Bank are praising the economy everyday.

The country will get a shock the day the bushmen are forced to hand over govt. The truth is yet to come. Akol's cries are nothing !
Report to administrator