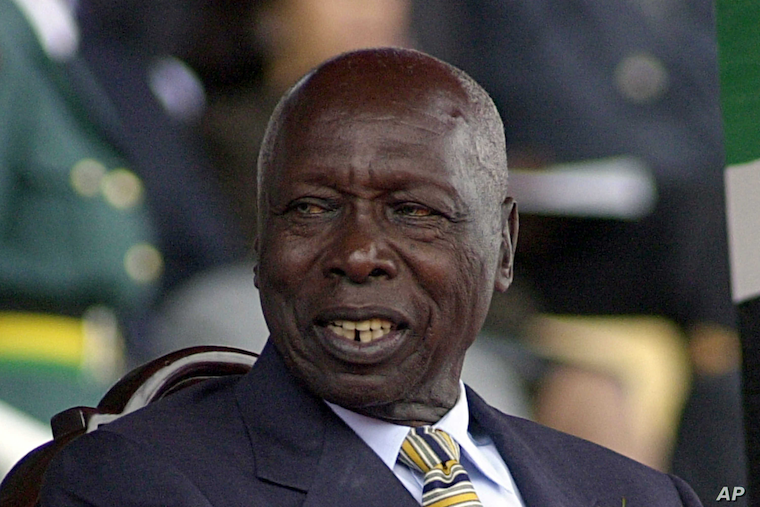 Daniel arap Moi, who served as Kenya's president between 1978 and 2002, has died in Nairobi at age 95. Kenyans have mixed memories of the longtime leader, with some recalling him as a force for stability and others remembering him as a tyrant.

Kenya’s second and longest-serving president, Daniel Toroitich arap Moi, died Tuesday morning, the country's presidency and his family confirmed. No cause of death was given, but reports say Moi had experienced breathing problems in recent months.

Gideon Moi, the former president's son, spoke at a news conference at the Nairobi hospital where Moi passed away while undergoing treatment.

“I would like to take this opportunity to tell my fellow Kenyans that Mzee [our father] passed on this morning at 5.20 a.m. He passes away peacefully, I was by his side and as a family we have accepted. Mine is just to give my heartfelt gratitude to all Kenyans and non-Kenyans for the prayers that have been given to Mzee and my family,” he said.

Moi took over Kenya’s presidency following the death of the country’s first president, Jomo Kenyatta, in 1978. Moi would then rule the country until 2002, when he retired. Moi was considered as a kind man by his supporters.

Thirty-seven-year-old Ken Mwema, for instance, remains nostalgic about the free milk program the president rolled out in the 90s across all public schools.

“Every student was looking forward to going to school to get the milk; other than the milk there was the good education, those are the good memories I have of him. The country was more stable, there was more unity, Kenyans were more patriotic to Kenya; there was tribalism but it was not as it is today. It's out there, everywhere right now,” he said.

For critics, Moi was a dictator who ruled with an iron fist. Moi faced local and international criticism over human rights abuses, nepotism and corruption. Opponents sometimes were arrested and taken to torture chambers.

Survivors would later describe the chambers as being dark, filled with cold water and with nowhere to sit. Human rights activist Ruth Mumbi blames Moi for what she calls "the problems we have today."

“For me, I remember Moi as a dictator, a tyrant, who didn't want to be criticized. He was one person who always fueled tribal animosity, which up to date has been a challenge to reconcile different communities, which was one of his undoings," said Mumbi.

Political analyst Herman Manyora said it was Moi's leadership that kept Kenya stable at a time when other African countries were falling apart.

“He was present at a time when in Africa there was turmoil. Sometimes when you are leading people in times as those, you could be seen to be a man of excesses, all around us except Tanzania, all these countries around us were in a mess. They were all run down by military coups and instability. He was able to keep the country together in those difficult days, for 24 years," said Manyora.

In a proclamation Tuesday, President Uhuru Kenyatta described Moi as a great African statesman, an African icon, an ardent pan-African and a devoted Christian. Kenyatta declared a period of national mourning that will last until Moi's funeral.

President Daniel Arap Moi came to Uganda after fall of Amin, joined Dr Obote to call Ugandans to UNITY to have a beginning, at kololo air strip!

I hope Kenyans remember Moi calmed down the Kikuyu/Luo fight when he was president!
Report to administrator
-2 #2 Lysol 2020-02-05 22:41
Moi was corrupt and biased and dishonest. He contributed to the the sad history of Uganda because of envi and the hatred of Obote.

Uganda economy was doing much better than Kenya before one Amin came to power. Not to mentioned that he helped bring Museveni to power.
Report to administrator
+2 #3 rubangakene 2020-02-05 23:20
President Moi is the one who really dealt a "great blow" to the Kikuyu arrogance towards other tribes by enhancing self-esteem and images of other tribes, although he overdid it for the Kalenjins.

He will also be remembered as a man who didn't lick the boots of the wazungus and their cronies. He let Njonjo spend one Xmas behind bars after the "Judge Miller Inquiry", can you imagine!

I also remember him during a rally in Mombasa the American Embassy should not interfere in the internal running of Kenya. Quote: "Apana hulisa awa, ni wavuuta baangi tuu."
Report to administrator
-1 #4 Lakwena 2020-02-06 09:24
Moi the first and probably the last African leader who did not have a First Lady, was the most vicious and corrupt Kenyan President. E.g. in the Mid 80s Nyayo House echoed with torture, terror and murder.

In the minds and conscience of many Kenyans, the very thought of "Nyayo House" on Kenyatta Avenue brings goose bumps. Some of us who live on and off and in and out of Nairobi, without looking in the direction of that house had to pass it in a hurry, .

In other words, Nyayo House was Moi's official Torture Safe House for his political and/or unscrupulous business(Kikuyu) opponents/competitors.
Report to administrator