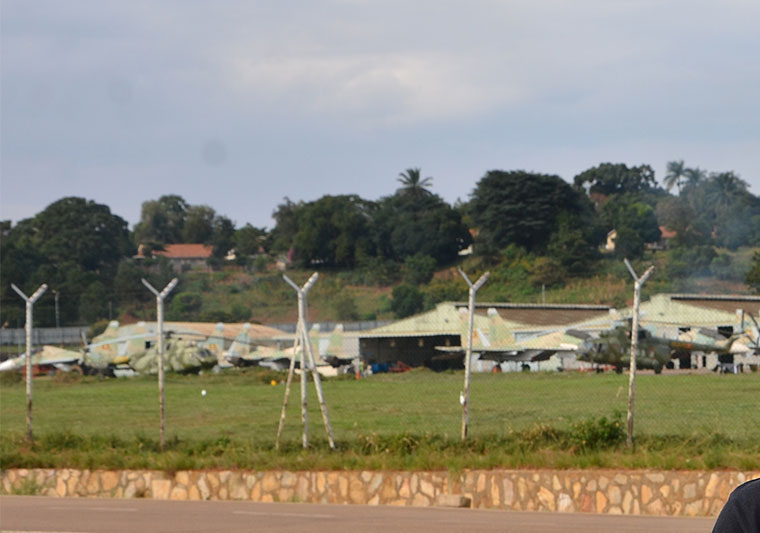 Two Uganda People’s Defense Air Forces (UPDAF) soldiers have been killed in a helicopter crash during a training mission in Bulo, Gomba district in central Uganda.

“Sadly, no one is reported to have survived,” he said in a text.

He says investigations into the cause of the crash have commenced.

“We offer our condolences to the family members and entire UPDF fraternity,” said Karemire.

According to residents, a loud bang followed the crash and the helicopter reportedly crashed straight into a hill. The dead reportedly included a male and female officer.

The AF 302 montage must be a UPDF airforce assigned number since nothing like this exists in the Bell helicopter line-up.

Nonetheless it is a tragic accident and our hearts and souls go to the bereaved families. The accident should lead to some soul searching about how public equipment procurements and maintenance contracts are made in President Museveni's Uganda.

Does anybody recall the UPDF junk helicopter saga - the president's brother was the procurement officer, another officer - a medical doctor - led the team that inspected the helicopters which were already dismantled and in crates waiting to be transported to Uganda and much more questionable things.

The familes of the deceased must first be informed in detailed before divulging that information to the public.

That lady instructor had more than 14 years experience, and she was training someone from the other side of the country. Your stupidity can't allow you to think beyond nepotism.How deplorable.

Why are they concealing the names of the dead, we all know where they come from, one of the ladies on the chopper was a very beautiful long nosed lady, she was being trained for good things ahead, she is from the privileged class.

Report to administrator
0 #5 WADADA rogers 2020-01-29 09:07
I dont care about your stupid sentiments Ivan, i am entitled to my opinion, i would have expected you to also say something of your own, atleast i managed to get your silly emotions working in vain.

We live with all these cousins of corruption including nepotism and many of us are happy when some of these fellows die.

Besides, how are some of us who are not privileged like you able to know the names of the dead, its the likes of you who are privy to such information.

How can a person with 14 years experience if at all attempt to jump out of a chopper that is in the air? No one has ever done done such a thing unless they are amateurs
Report to administrator
0 #6 SEMPIIMA 2020-01-29 10:58
Why put nepotism in everything. If someone from other parts u would say it was planned.

At least he is honest enough to write his true frustration Wadada `s "stupidity " in nothing compared to the stupidTRIBALIST& NEPOTISCTIC mustard seed that Museveni has planted , not only in Uganda but beyond.

Idiots do not even know why Rwanda is trying to distance itself from this man . South Sudan will never get peace as long Museveni takes sides in this tribal conflict .

So yes , when some of the "chosen ones " die , people talk. Whey they do , we are reminded how Museveni has divided what used to be our country
This boat is not balanced

You can`t sow stupidity and reap greciousness
Report to administrator
0 #9 Wooden K. 2020-01-29 15:02
When Oyite Ojok died in a chopper , the late Archbishop Kawuma did not hide the fact that Oyite did not deserve all our tears . Kawuma chose an appropriate reading to make his point

In Kampala , you could hear people quietly whispering ; " do those people also cry" ?

When arrogant rulers devide a nation , they consequently alter and dilute the notion or culture of common grief.

Look at the funeral ceremony of late Karungi and that of the other guy ( from Wadada`s Place) who died with her.

Then you will know why some people talk "stupid"

BTW : what happened --no comments for two days ??!!
Report to administrator