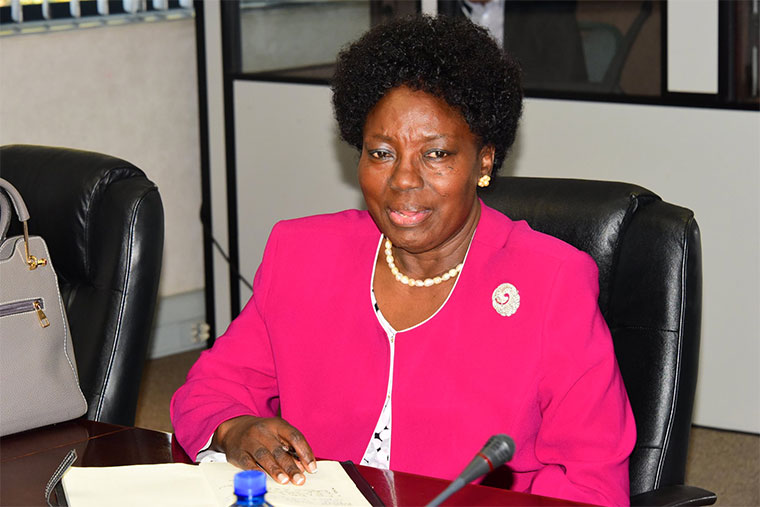 Dr. Betty Naigaga got all the attention and drew the wrath of the ruling NRM politicians in the eastern Kamuli district when she announced last week that she would be seeking in 2021 to wrest the Kamuli district Woman parliamentary seat from Rebecca Kadaga, the incumbent and speaker of parliament.

Naigaga’s potential run was announced on Busoga’s radio station, Baba FM. According to the radio, Naigaga met the LC-I chairpersons of Bugulumbya sub-county in Kamuli last week and declared she wanted to oust Kadaga, who has held the seat for many years.

Naigaga told her audience at Bugulumbya sub-county headquarters that people in Kamuli need a more approachable woman member of parliament who has no tight security detail like Kadaga.

But that statement has drawn a strong response from the NRM leaders in Kamuli. In a statement, Trevor Solomon Baleke, the Kamuli District National Resistance Movement administrative secretary, warned Kadaga’s would-be challengers not to waste time.

“Even the blind can ably see that there can never be anyone to replace the woman MP and speaker of parliament, Rebecca Kadaga,” he said.

“I also just hear the rumour of some people lying to themselves that they can contest against ‘Maama’ but I think such persons need a medical checkup. Kadaga is irreplaceable. What she has done can be seen by those who see, touch and feel,” Baleke said.

“If that is her argument then we are doomed. Who has told her (Naigaga) that the people of Kamuli don’t approach Rt Hon (Kadaga)? Naigaga should accept to learn that the speaker receives dozens of locals at her office at parliament every day. She is the reason some of us have ever stepped at parliament and most importantly Kadaga’s visibility on the ground is also very glaring, she is ever with her people,” Baleke said.

Baleke urged Naigaga and others to contest as councillors.

“We even just hear the name Naigaga. Who is she? Anyway, my advice to such people would be that they become women councillors in their respective parishes,” Baleke said, arguing that Kamuli, Busoga and Uganda need Kadaga more than ever before.

Baleke, a professional teacher and journalist urged voters to give Kadaga “a stress-free environment to enable her to concentrate on development”.

He offered the same counsel on City FM 96 while appearing on the daily evening talk show - Gano Mazima on Monday.

“She (Kadaga) is our sole candidate. Whoever is not happy about it will feel it on voting day. And by the way there is a way our people always handle such persons who stand in the way of our sole candidate,” he said.

This is not the first time Baleke is coming out openly in support of Kadaga. Last year, when the speaker was hospitalized in Nairobi, a group of women and youth in Wankole sub-county in Kamuli were mobilized by Baleke to demonstrate against Damiano Akuze, a witchdoctor, who tried to publicly taint Kadaga’s image.

0 #1 Odongkara 2020-01-22 13:29
Dr. Betty Naigaga will continue draw the wrath of the ruling NRM politicians in the eastern Kamuli district but she is determined to wrest the Kamuli district Woman parliamentary seat from Rebecca Kadaga.

So she is going to give Baleke and Kadaga “a stress-filled environment. She (Kadaga) can't a sole candidate.

Whoever is not happy about it will feel it on voting day. And Baleke, if you mean violence by your saying that, "and by the way there is a way our people always handle such persons who stand in the way of our sole candidate,” rest assured you will be treated to the same in the same proportions.

Baleke, don't forget that you denied Damiano Akuze his rights when truly Kadaga sourced his services that is why she is who she is. Naiga is not Akuze and forget the rubbish of "sole candidate" madness.
Report to administrator
0 #2 Wazza 2020-01-22 14:44
I cant see what this woman has done in Busoga for many years especially in Kamuli.

The basoga must wake up and vote her out of parliament and allow her join the NRM mafia gang in state house. Busoga needs new blood of leaders
Report to administrator
0 #3 kibedi nkuutu 2020-01-22 16:45
Baleke is confusing popularity with development!

Kadaga has not affected ANY sort of development in Kamuli let alone Busoga. What can Baleke show us that Kadaga has done?

Busoga is still rated the poorest region in AFRICA! We are still struggling to make ends meet. Schools, hospitals, medical centers, roads, electricity, are all a mess!

And guess what? The Speaker is from Busoga! Let us elect someone else who will not tell us that she is busy with state duties to care about the rest of us.

Let Kadaga concentrate on state affairs like hosting delegates from Europe, and leave Busoga. She has failed in all her years as MP and Speaker. And don't tell me it us Busoga who have a problem. Baleke wake up!
Report to administrator
+1 #4 Lysol 2020-01-22 22:19
The voodoo queen should retire due to her poor health and leave someone younger and healthy to replace her from either party.

Not to mention that rapid weight loss by her own boss, Museveni. It could be due to an underlying health issues both physical and mental.

Of course he is fooling the world that it's based on dieting alone. M7 was a skinny man, but he got fat after taking power and looting Uganda. Sudden weight loss can also be a sign of slowly dying and old age.
Report to administrator