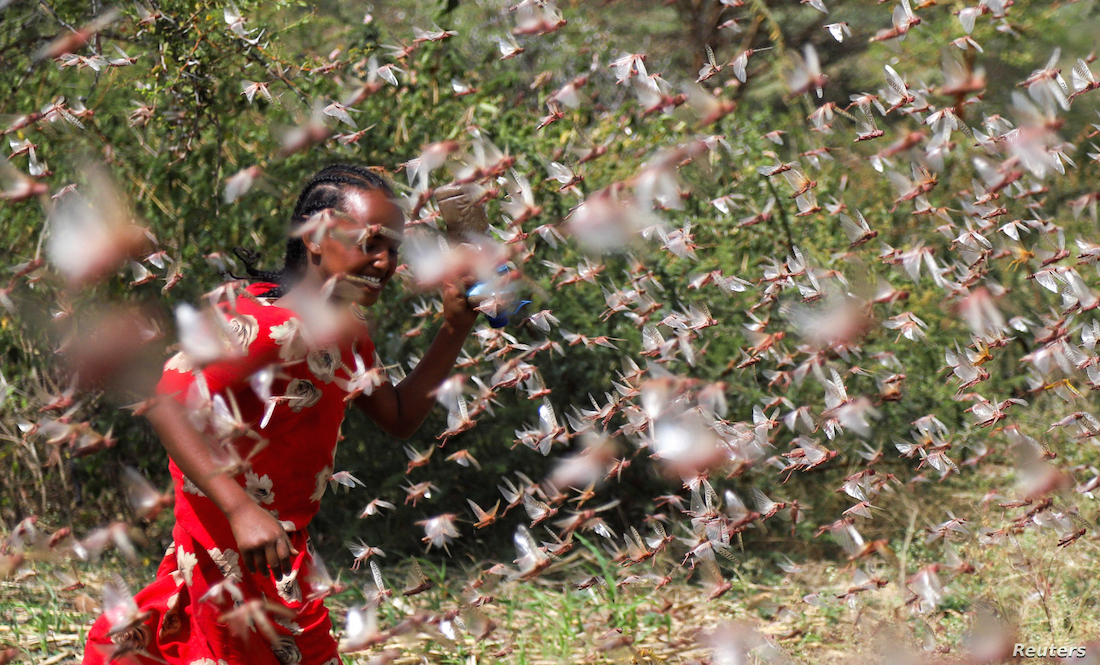 The desert locust swarms that have invaded Ethiopia, Kenya and Somalia could spill over into more countries in East Africa, the United Nations Food and Agriculture Organization (FAO) has warned.

The UN agency stressed that the region's unusual climate conditions have favoured the rapid reproduction of the locust swarms and cautioned that if left unchecked, the numbers of crop-devouring insects could grow 500 fold by June 2020.

The swarms with unprecedented size and destructive potential, have already destroyed hundreds of thousands of acres of crops, posing a bigger threat of food insecurity to the region. FAO is now calling for a collective campaign to scale up efforts to deal with the voracious pests before they spill over to other countries in East Africa.

Kenya has not faced a locust threat of this magnitude in over 70 years, FAO warned. The outbreak of desert locusts, considered the most dangerous locust species, has also affected parts of Somalia and Ethiopia, the likes of which have not been seen on this scale in 25 years.

A statement issued by FAO added that although Uganda and South Sudan are not currently affected, they are at high risk. Two weeks ago, the locusts were seen in six Kenyan counties of Mandera, Marsabit, Wajir, Garissa, Meru and Isiolo. The fear that the large immature swarms were moving towards Turkana county, poses a great danger to the areas of Karamoja, in northeastern Uganda, which shares a common border with Turkana County.

FAO director-general QU Dongyu said the agency is activating fast-track mechanisms to support governments, warning that the situation is now of international dimensions and the threats cross-border.

Swarms potentially containing hundreds of millions of individual desert locusts can move 150 kilometres a day – devastating rural livelihoods. During plagues, desert locusts can easily affect 20 per cent of the earth's land, more than 65 of the world's poorest countries, and potentially damage the livelihood of one-tenth of the world's population.

According to the UN agency, “given the scale of the current swarms, aerial control is the only effective means to reduce the locust numbers."

"Authorities in the region have already jump-started control activities but in view of the scale and the urgency of the threat, additional financial backing from the international the donor community is needed so they can access the tools and resources required to get the job done," Qu said.

FAO is assisting with forecasts, early warning and alerts on the timing, scale and location of invasions and breeding. Qu also warned the response must include efforts to restore people’s livelihoods.

“Communities in Eastern Africa have already been impacted by extended droughts, which have eroded their capacities to grow food and make a living. We need to help them get back on their feet, once the locusts are gone," Qu said.

The UN is seeking at least $70 million to urgently support both pest control and livelihood protection operations in the three most affected countries. Uganda recently announced that it needed up to Shs 5 billion to deal with the threat.

0 #1 WADADA rogers 2020-01-21 15:53
FAO is being cagey with information, just tell Ugandans to harvest, dry and eat these locusts, locusts are a sign of extreme hunger, this is an opportunity for us to stock food called locusts, they are edible.

This threat is real and is bound to cost farmers alot, unfortunately, there is nothing we can do to as avert the invasion
Report to administrator
0 #2 otyang Michael 2020-01-24 14:05
wadada Rogers this is being careless in your thinking please remember this is a serious issue not to be handled carelessly Mr Wadada
Report to administrator